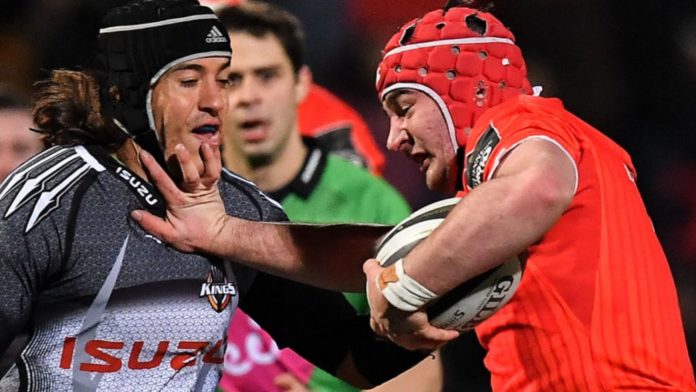 Barrett beats Telusa Veainu and Stuart Hogg to the full-back slot after a dazzling display against the Sharks.

The All Black provided three try assists and kicked 13 points as the Canes made it two wins on the bounce.

The Fiji powerhouse helped himself to a hat-trick as Montpellier returned to winning ways against Bayonne.

Nadolo’s third try on 51 minutes extended their lead to 16 points and it proved a crucial score. Montpellier didn’t trouble the scoreboard again as Bayonne rallied, only to fall narrowly short as the hosts held on for a 31-29 win.

Nadolo’s international team-mate returned from the sin bin to score two crucial tries as Bordeaux beat Lyon to leapfrog their opponents at the Top 14 summit.

Radradra gave Bristol fans a taster of what they can expect next season. He raced onto a pop pass to crash over from close range before half-time, and then showed great wheels as he turned on the gas on halfway and sped past the Lyon defence to dot down underneath the posts.

Curtis Rona also deserves a mention after his two-try display for London Irish, who continued their impressive away form with victory at Harlequins.

Goodhue scored a try and created another as the Crusaders returned to winning ways against the Blues.

The New Zealand centre threw an audacious offload to put George Bridge over in the corner for the Crusaders’ first try at Eden Park.

‘A touch of real class from Goodhue’

We’ve got a brutal battle on our hands as @crusadersrugby storm ahead ?️

There was an element of good fortune for Goodhue’s try, his chip over the top ricocheting to Richie Mo’unga, but he reacted quickly to take the fly-half’s pass and put his side on course for victory.

Lam joins his Hurricanes team-mate Barrett in our back three after a devastating attacking display.

He edges out Shane Daly, who also bagged a double in Munster’s crushing of the Southern Kings.

Horne shone on his return to club action by scoring two tries in a 20-point haul against Zebre.

The Scotland fly-half crossed at either end of the first half and was denied a hat-trick midway through the second when he broke downfield, only to be denied by a high tackle which resulted in a penalty try.

Elsewhere, Callum Sheedy did his chances of a Wales call-up no harm with a man-of-the-match display in Bristol’s brilliant comeback against Northampton.

The Chiefs maintained their 100 per cent start to the season in Tokyo, where Weber skippered Warren Gatland’s side to victory over the Sunwolves.

The scrum-half combined well with No 10 Kaleb Trask and found his fly-half in space in the lead-up to the Chiefs’ opening try.

Weber brushed off three tacklers to score the Chiefs’ third and his subtle pass teed up Damian McKenzie for a try. He also made a try-saving tackle at the other end.

The Stormers have also made a dream start and their last-gasp win away to the Lions made it three victories in succession.

Kitshoff shone in the scrum, where he forced three penalties. He was also a menace at the breakdown, winning three defensive turnovers, while chipping in with seven tackles and five carries.

The No 2 shirt is shared between two hat-trick-scoring hookers, and they should also be sharing the plaudits with their respective packs given all of Fainga’a and Montoya’s tries came off lineout drives.

Montoya was a late inclusion in the Jaguares starting line-up after Agustin Creevy suffered a bicep injury and starred as they defeated the Reds, but there was late heartbreak for Fainga’a and the Brumbies as the Highlanders clinched victory on the final play in Canberra.

Koch has been linked with a return to South Africa at the end of the season but for now he remains fully committed to the Saracens cause.

The tighthead made 13 tackles and 10 carries in the superb win over Sale, while putting in his usual shift at the scrum.

Bresler recovered from an early fumble to make a lung-busting 27 tackles against Bath. The lock also won five lineouts as the Warriors fell agonisingly short of victory.

The third Springbok World Cup winner in our line-up, Mostert impressed in both defence and attack on a frustrating night for Gloucester at home to Exeter.

Mostert made a team-leading 24 carries, 12 tackles and won four lineouts – including one steal.

The former Wales and Lions flanker produced a typical all-action performance as the Ospreys to beat Ulster to snap a 13-game losing streak.

Lydiate made 22 tackles and was a pest at the breakdown as the Welsh side claimed only their second win of a testing season.

Mention also for Nick Isiekwe, who won 13 lineouts in Saracens’ win over Sale.

Will Connors is unfortunate to miss out after his brace against the Cheetahs but Hodnett takes the openside slot after a debut to remember.

He made 92 metres from just nine carries against the Southern Kings while also putting in a shift in defence, and finished off a team move early in the second half to bag his first Munster try.

Botha is the fourth and final hat-trick hero in this week’s XV, excelling alongside Hodnett in the Munster back row.

Botha was a ball-carrying threat throughout against his fellow South Africans, making 66 metres from 15 carries. He also chipped in with 11 tackles.

‘The Voice’ returns with a virtual audience and an audition to...