Home Culture At least 6 celebrities are showing off new face tattoos. They include... 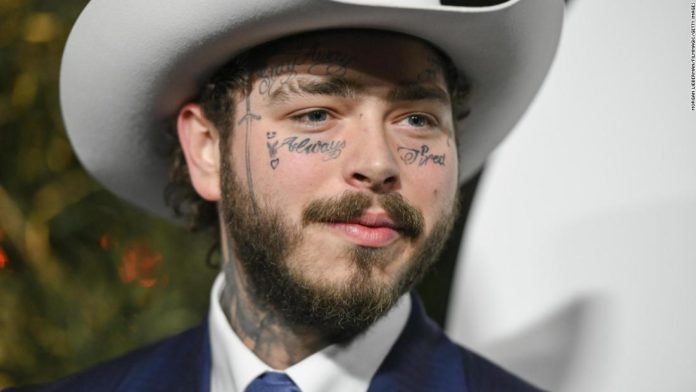 Remember the barbed wire? Tribal bands? Chinese lettering? How about the dreaded tramp stamp?
The latest trend is hard to ignore — because it’s literally in your face.
Face tatts.
It started off as a fad among young hip hop artists, but has since crossed over to pop stars, models, influencers and more.
In fact, just recently at least six celebrities showed off new face ink. Here’s a look:

Presley Gerber, a 20-year-old actor and model, already has a number of visible tattoos. But on February 7, the young celebrity (and Cindy Crawford’s son) posted a video of his new addition: “MISUNDERSTOOD,” written in all caps, just beneath his right eye.

Amber Rose and her boyfriend

Amber Rose made headlines earlier this month when she debuted the words “Bash Slash” — devoted to her sons “Bash” (for Sebastian Taylor) and “Slash” (for Electric Alexander Edwards) — in cursive letters just below her hairline.
The model and activist said her decision to tattoo her children’s names on her forehead was inspired by the late NBA legend Kobe Bryant.
Rose’s boyfriend Alexander “AE” Edwards, who is the father of 4-month-old son Slash, also got ink to match. Edwards got the birth dates of Rose’s children tattooed on his forehead. Tattoo artist Jacob Ramirez posted a picture of the tattoo, which featured the numbers “10.10.19” and “2.21.13” with a lighting bolt in between.
Rapper “The Game,” whose real name is Jayceon Terrell Taylor, posted photos on Wednesday of his new face tattoo in honor of Los Angeles Lakers legend Kobe Bryant.
The tattoo, which he got right above his eyebrow, features Bryant’s autograph behind a sideways number eight, symbolizing the late NBA star’s old jersey number and an infinity sign.

Singer Chris Brown joined in the fun with a Nike Air Jordan shoe tattooed on his face next to his ear. According to his tattoo artist Ganga, the sneaker is a recent addition.
It is not, however, Brown’s first face tattoo.

If Post Malone is known for anything besides his music, it’s most likely his intense collection of face tattoos that range from a barbed wire on his forehead to a massive mace and chain on his cheek.
The singer doesn’t seem to be stopping anytime soon. Only a month and a half into 2020, Malone has added two more face tatts to his collection.
Tattoo artist Zachary Lowhorn posted a photo on Monday showing a freshly-tattooed hammer on the rapper’s cheek.
Another one of his tattoo artists, Ruben, also posted a photo of a bloodied buzz saw Malone got tattooed last week.