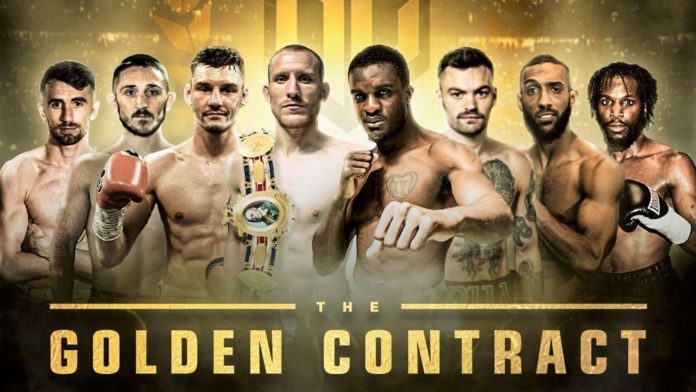 Watch a live stream of The Golden Contract super-lightweight and featherweight draw from 1.30pm on Tuesday

Ohara Davies and Tyrone McKenna could enforce a grudge fight in The Golden Contract semi-finals if they pick out a ‘Golden Ball’ in Tuesday’s draw.

Davies, McKenna, Jeff Ofori and Mohamed Mimoue are the last four super-lightweights, while Ryan Walsh, Leigh Wood, Jazza Dickens and Tyrone McCullagh are the remaining featherweights, with both semis being staged at York Hall, Bethnal Green on Friday night, live on Sky Sports.

Ahead of this Friday’s Golden Contract semi-finals, @OharaDavies says that ‘arrogant OD’ is gone & that this is the start of ‘humble OD’

? Watch Davies in the GC on Friday from 7.30pm on Sky Sports Action pic.twitter.com/vwQO0lTiUS

A ‘Golden Ball’ is available in the super-lightweight and featherweight draw, and the fighter that picks it can choose any of the possible three opponents.

MTK Global Professional Development Coordinator Jamie Conlan said: “This is just the latest little cherry on top with regards to the thrills and spills in store. It gives the draw an extra bit of interest, as if that were needed with so many big names involved.

“The difference with this ‘Golden Ball’ is that whoever draws it gets to pick from all three potential opponents. Had we retained the previous system, whoever drew the other blue ball would have been exempt from being picked.

? Ruthless Ryan ?@Walsh7Ryan stopped Hairon Socarras in the Golden Contract quarter-finals. Will he be able to secure a place in the final?

? Find out on Friday night from 7.30pm live on Sky Sports Action pic.twitter.com/FkhD71h1tL

“As we’ve seen, every fighter approaches the draw differently. Some like to dictate, some like to feel the insult of being picked and some simply don’t care. It’ll be interesting to see how that plays out.

“A lot of eyes will be on whether Tyrone McKenna and Ohara Davies are going to meet on Friday in one of the super-lightweight semis but you can take your pick of all the possible match-ups – it’s going to be exciting.”

Watch a live stream of The Golden Contract super-lightweight and featherweight draw from 1.30pm on Tuesday.