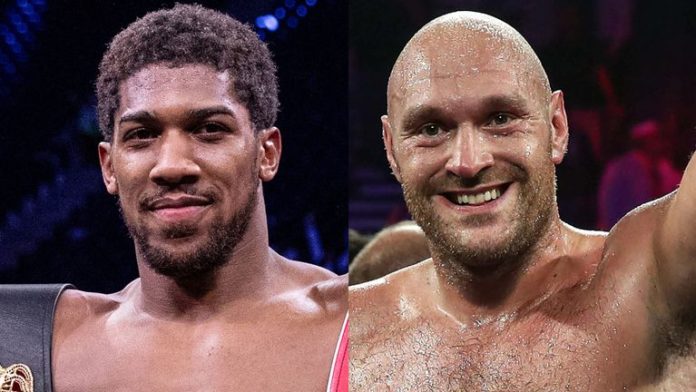 “We’ll say: ‘Are you doing a third fight? If so, can you do it quickly please?'” Eddie Hearn tells Sky Sports

By Richard Damerell and James Dielhenn

Anthony Joshua will apply ‘pressure’ on the Deontay Wilder-Tyson Fury winner to finally secure a fight to decide the world’s No 1 heavyweight, says promoter Eddie Hearn.

WBC champion Wilder faces Fury in a Las Vegas rematch this weekend, with Joshua hoping to put his WBA ‘super’ IBF and WBO belts on the line against the victorious fighter.

An immediate third fight between Wilder and Fury could further delay an undisputed clash, but Matchroom Boxing boss Hearn expects to resume fresh talks for a fight that would clear up any debate about the division’s dominant champion.

Hearn told Sky Sports: “Everybody has opinions but it’s impossible to say. My opinion is that Joshua is the best but, until he beats the winner, the world will not be satisfied.

“We have to put the pressure on the winner to finally get our fight on in 2020.

“We will have a conversation and say: ‘Are you doing a third fight? If so, can you do it quickly please?'”

Joshua and Wilder have previously been unable to agree terms, but Hearn is optimistic about reaching a deal with Fury, if he claims the WBC title at the MGM Grand.

“It’s easier on the Fury side because it’s just a conversation with [his US-based promoter] Bob Arum and [his management] MTK,” added Hearn.

Joshua has suggested that he would prefer to finally share the ring with Wilder, but expects fellow Brit Fury to become a two-time world champion.

“Wilder coming through is better because [a fight with me] is what people have been eagerly anticipating,” Joshua told Sky Sports.

“But I think Fury can win. For Wilder to win, he has to knock Fury completely out, and he couldn’t do that the first time.

“For Fury to win, he can hurt Wilder or out-box him. Fury has more to his arsenal so that’s why I’m leaning to him.

Whyte: Will Fury even fight me? ? @DillianWhyte is hoping Tyson Fury beats Deontay Wilder this weekend, but he’s not confident that the Gypsy King would defend the WBC title against him if he does win. pic.twitter.com/DqWlPwJSYg

“Fury can punch a bit. He’s underestimated with his punching power which makes him dangerous. If you underestimate someone, it makes them dangerous because you don’t respect them until you get hit.

“Fury is a really good boxer, to a certain degree, so he has the upper hand. Wilder isn’t the best of boxers but he has a right hand – if you can avoid that, you have the beating of him.

“Good luck to Fury – it would be great to have two heavyweight champions here in England.”