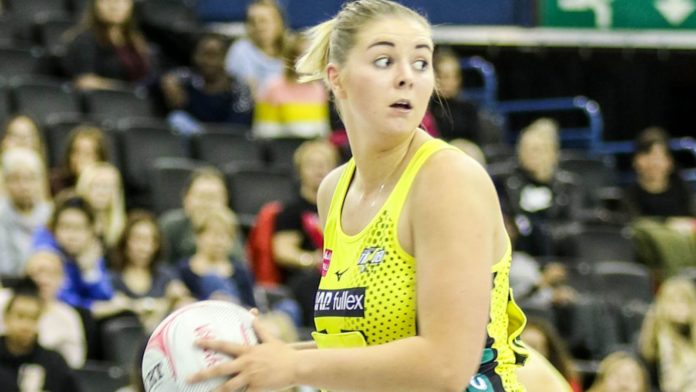 “We all believe, 100 per cent, that we can achieve back-to-back titles,” says shooter Eleanor Cardwell

By Emma Thurston and Hannah Wilkes

Manchester Thunder are entering a new Vitality Netball Superleague season with total belief in their ability to secure back-to-back titles.

In their history as Thunder, the franchise hasn’t ever been able to back up a Superleague title with one in the season directly after.

However, as the 2020 term comes into focus, shooter Eleanor Cardwell has shared that they are confident that they can change that pattern this time around.

“We all believe, 100 per cent, that we can achieve back-to-back titles,” Cardwell said to Sky Sports.

The manner in which Thunder secured the 2019 title was a dramatic one, coming back from six goals down twice to prevail over Wasps Netball at the Copper Box Arena.

Cardwell entered the Grand Final late as with eight minutes left to play, she was thrust into the spotlight after an injury to Joyce Mvula. At that point Thunder were 48-46 down and she instantly made her mark.

After nailing her first shot from a penalty pass or shot, she didn’t miss until the final seconds and even that was a shot against the buzzer to add a cherry on top. On the surface she looked serene, in reality she felt very different.

“I’ve watched it back and I liked how cool I was,” Cardwell said. “I didn’t feel that cool inside, I was screaming inside.”

“With about a minute-and-a-half to go I thought that I was going to start crying because I felt so much adrenaline was inside me and I looked at the scoreboard and thought they couldn’t get it back.

“So, my emotions started going. I said to myself, ‘okay Eleanor, keep it in. Keep those tears in because that would be really embarrassing’. That stood out for me, just trying to compose myself.”

I’m pretty sure a lot of people would have put us down and out in that final after the third quarter. For us to come back, to feel that momentum change, to ride with it, go with it and come out on top does feel really special

Thunder’s new Superleague season commences with a Grand Final rematch at Arena Birmingham, live on Sky Sports. It will be the first of three meetings between the two sides and the reigning champions are moving towards it (and the new season) with a settled squad.

Karen Greig has lost two just players from last year, Kerry Almond to retirement and Liana Leota to Severn Stars. Aside from that, every other player has been retained which is something Cardwell believes will be an asset.

“I think it’s a great advantage. It means that we can build on last season. The girls are slotting in really nicely, so it is just about building,” the shooter said.

“Again, it’s about trying to be consistent throughout the whole season and not letting any games slip.”

“We really enjoy spending time together and having a laugh,” vice-captain Laura Malcolm added.

“Lauren [Ngwira] and Ash [Neal] have fitted in brilliantly, so it will be nice to have something different as well as a lot of the same.”

Malcolm, alongside Cardwell, used her time with England’s Vitality Roses in South Africa and at the Vitality Nations Cup, to progress and develop on court.

The Vitality Netball Superleague Season Opener is live on Sky Sports and is set to be a recording-breaking day for netball in the UK.

Not only does the mid-court player enter the new Superleague season match-fit, but she has highlighted another string to her bow – the art of being a vice-captain.

“Being asked to do anything like [a vice-captain role] is always an honour,” Malcolm said.

“Thunder is very much in my heart, as is England, so being asked to step into that role is a real privilege for me. It won’t really change what I do, because I’m pretty similar on court in a captaincy role or not.

“For me, in a vice-captain role I think that it’s about supporting the captain as much as you can,” she added.

“I’m going to be making sure that I’m being that sounding board for Emma [Dovey] with any decisions that she wants to make. Also, communicating with Karen [Greig] as well as Emma on things that we need to work on as a team.

“It’s about being that extra support to your captain and your coach to ensure that they have the support that they need.”

We’ve got 10 players who can all be in the starting seven. If they were in any other Superleague team, I think they would be playing [as starters]. I think that’s a great quality to have in a team; to be able to put any player on at any point

With Wasps Netball having been the defending champions for the two seasons prior, Thunder had often adopted the tag of ‘underdogs’ and it wasn’t one that they shied away from.

“Probably for us we thrive off that underdog title,” Malcolm reflected.

“But, personally I’m really excited to have that target on our back and to see what it brings out of us as a team. I think it’s a good challenge for us and I think it will push us on further.”

Sky Sports is your home of netball and is back on your screens this month when the new Vitality Superleague season gets underway with all 10 teams in action at the Season Opener from Arena Birmingham on Saturday, February 22.

Exposing the myth of Usyk’s last loss – ‘I didn’t KO him!’

Qatar apologises after women strip-searched and examined at airport

Release of former detainees in Yemen: the longest journey home