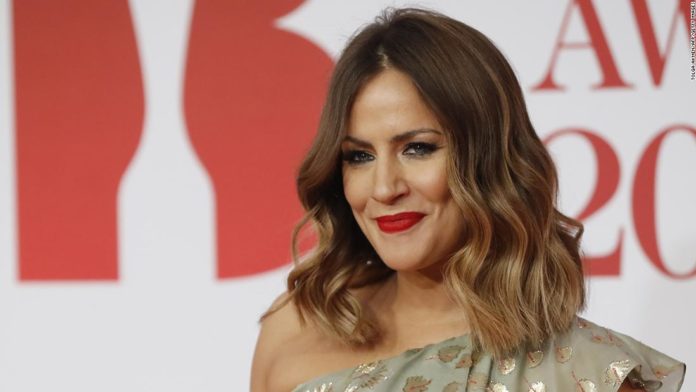 Flack, the 40-year-old former host of the hit UK reality show “Love Island,” died by suicide at her northeast London apartment as she awaited trial for an alleged assault of her boyfriend.
Mental health organizations urge against assuming a single factor in cases of suicide. But reaction was nonetheless swift and often definitive.
Social media, the British press and the Crown Prosecution Service have all been blamed for their treatment of the star, while celebrity well-wishers have been attacked for hypocrisy and politicians have mooted a reform of the media.
Meanwhile, the same media cycle that aided Flack’s rise to fame was condemned for tearing her down in her final months, and many reacted with fury as tabloids like The Sun moved swiftly to delete previous negative articles about the star.
What’s clear is that the reverberations from the death of Flack, a longtime staple of Britain’s raucous tabloid press, are being widely felt — with fundamental questions raised about the symbiotic relationship between the media and today’s television personalities.
For some commentators, the instant reactions were premature.
“When we experience the tragic loss of someone, we often look around for someone to point the finger at,” said Honey Langcaster-James, a television psychologist who has consulted on on-set welfare for shows including “Love Island.”
“We get consumed when someone dies in these circumstances by the question of why, and of what could have been done… but the important thing is we don’t speculate,” she told CNN.
But in death, as in life, fascination about Flack has given rise to plenty of speculation — and it’s highlighting the relentless industry of outrage that has both aided the rise of reality television personalities and swarmed them in their lowest moments.

Flack’s career was boosted, at least in part, by a media ecosystem that thrives on judgment and is quick to identify winners and losers.
She won a public vote to claim victory in “Strictly Come Dancing,” one of Britain’s most popular shows, and then helmed another breakout hit — “Love Island” — whose success relies heavily on its omnipresence on social media and on the homepages of tabloid news sites.
But that same environment ensured the lows of Flack’s career were as loudly amplified as the highs. Flack attracted criticism for dating a 17-year-old Harry Styles while she was 31. Years later, the details of the alleged assault in December on her partner, Lewis Burton, have been combed over online on an almost daily basis.
After she was charged, a front page of the Daily Star newspaper branded her “Caroline Smack,” while The Sun published and then deleted a story about a “brutal” Valentine Day’s card mocking her assault case.
“She lived every mistake publicly under the scrutiny of the media,” Laura Whitmore, Flack’s friend and replacement as “Love Island” host, said on her BBC radio show the day after her death was confirmed. “To the press who demonize and tear down success: we’ve had enough.”
Now, commentators and politicians are asking whether such such levels of media scrutiny should exist at all — and the fallout from Flack’s death has reopened a long-running debate over press regulation in the country.
“We welcome the public outcry for change. What happened to Caroline Flack will happen to vulnerable people again and again, until the government acts,” Nathan Sparkes, policy director of the campaign group Hacked Off, told CNN.
Hacked Off was formed in the wake of the 2011 British phone hacking scandal, which led to the closure of the News of the World tabloid and prompted a major inquiry into the British press.
“This applies to a minority of journalists overall … but we do need some form of accountability,” said Sparkes.
Asking for help

An online petition calling for a review into the media after Flack’s death has attracted more than 200,000 signatures, and a campaign is urging for new legislation dubbed “Caroline’s Law” to be implemented.
But such calls have been resisted in the past, with fears they could threaten press freedom.
Media law consultant David Banks has warned against identifying the media as culprits in Flack’s death.
“To attribute her death to one thing is, in my opinion, and in my experience of 32 years reporting inquests, a mistake,” he wrote on Twitter. “There were a number of things happening in her life that we know a little about — the upcoming trial for assault; her relationship with her boyfriend; her removal as a presenter of Love Island.”
“There may also be other things happening in her life that we know absolutely nothing about, but which contributed to what happened,” he added. “The inquest *might* discover these things, but equally might not. We may never know.”

Is social media fueling the fire?

Obsessive media coverage of celebrities is nothing new in Britain, a country whose tabloids are known for their relentless and unwavering pursuit of scandal.
But on social media and in the streets, the dissection was often harsher still — and Flack had spoken about the difficulties of living in the public eye.
“People say you have to expect that kind of scrutiny because you work in television. Really? Why? Who says so?” Flack wrote in her 2015 autobiography.
“Perhaps the worst was Twitter,” she wrote. “However vile they are, newspapers have to be careful because of libel and privacy. But Twitter is different. nobody censors that.” CNN has contacted Twitter for comment.
Langcaster-James, who works with television personalities on how to deal with online abuse, told CNN social media can be a lonely place for celebrities.
“We hear the same things time and time again — social media has made a lot of things worse for people in the public eye,” she said. “The public don’t always see that people are struggling … we only ever see quite an unrealistic picture of someone’s life online, and that’s the same for celebrities.”
“It can be so difficult for them to be honest about how they’re feeling, because they’re worried it will affect their career prospects — we get told that from many clients,” she added. “They don’t want production companies to know that they’re struggling.”

The media hasn’t been the only target of anger over Flack’s death.
Even as the related hashtag #BeKind was trending, several Twitter users displayed their anger by sending abuse to the reporter who wrote a story in The Sun — headlined “Brutal Caroline Flack Valentine’s Day card cruelly mocks troubled star with ‘I’ll f***ing lamp you’ message” — that was published hours before she died.
Decisions over whether to cover a story are usually taken by editors, with the story then assigned to a reporter, who often do not write the headlines. But such distinctions are lost in the whirlwind of social media outrage.
Elsewhere, as celebrities shared messages of condolences, some — like TV host and former newspaper editor Piers Morgan, who frequently courts controversy online and on his ITV morning show — were branded hypocrites and condemned for their previous tweets.
ITV itself has come under scrutiny, with news outlets pointing out that Flack is the third person associated with “Love Island” to die by suicide. Two former contestants took their own lives in the past two years. CNN has contacted ITV for comment for this article; it said in a previous statement it was “shocked and saddened” by Flack’s death.
The UK’s Crown Prosecution Service — the criminal prosecutions agency that determined to take Flack’s assault case to court — was targeted by Flack’s management team, which accused it of pursuing a “show trial” despite her boyfriend not wishing to press charges.
“The CPS should look at themselves today,” they said, and scores of Flack’s fans have attacked the agency online. But as others have pointed out, the decision to press charges in domestic abuse cases, even when the alleged victim does not wish to do so, must sometimes be taken to ensure that victims are not coerced into dropping charges by their partners.
In response, the prosecution service published a statement outlining the “the role of the CPS in deciding whether to charge an individual with a criminal offence.” It stressed the statement was not related to any individual case.

The final piece of the puzzle surrounding Flack’s death is the future of the program that propelled her to household-name status.
“Love Island” was pulled from TV schedules on Saturday and Sunday evening, but was set to return on Monday night with a tribute to Flack.
Nonetheless, the remainder of its current series — due to end next week — will unfold under a cloud of uncertainty.
The series has been criticized in the past for its format and the torrent of attention its characters receive on social media — and there is little doubt that online commentary has aided its success.
In one segment of each series, contestants are read mocking tweets posted by members of the public. A handful of its stars have discussed receiving online criticism after leaving the show.
A former contestant, Eyal Booker, told CNN last year that the show encourages a culture of judgment. Several contestants have felt the wrath of social media for their choices in the villa — to the extent that one, Joe Garratt, reportedly was placed into a safe house after being dumped from the show.
ITV has said it has boosted its duty-of-care processes, including offering “enhanced psychological support.”
But several of Flack’s friends and peers have defended the show. Whitmore said in her radio segment: “Caroline loved to love. That’s all she wanted. Which is why a show like Love Island was important to her, because the show is about finding love, friendship, having a laugh. The problem wasn’t the show.”