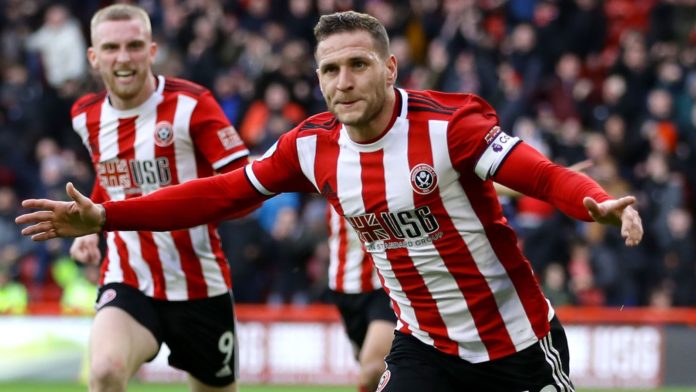 Sheffield United can capitalise on lack of attacking focal point at Manchester United, Tottenham and Chelsea

Paul Merson gives his verdict on the race for Champions League football next season, the running feud between Paul Pogba’s agent Mino Raiola and Manchester United and the uncertain future surrounding Manchester City…

It was a big win for Manchester United at Chelsea, but they weren’t good. They’re two just-above average teams, if I’m being honest. United winning just covers over the cracks, while Chelsea losing means you start seeing the cracks.

If Chelsea put their chances away in the first half, the game’s over, but they didn’t. Harry Maguire should’ve been sent off and he then scores, so there were a lot of things where you could say with Chelsea they could’ve won the game.

Watching last night, Sheffield United are massive players in the Champions League race. With Manchester United, you’re talking about one of the biggest clubs in the world not having a centre forward. They’re playing with Daniel James up front, who sooner or later has to be taken out of the team. You feel sorry for the lad, now. He looks a bit lost if I’m honest – he needs a break.

He’s playing all the time but his game is based on sheer pace. It won’t bring you much alone in the Premier League, and I feel for him. He needs to be brought out of the team but they’ve haven’t got anyone to bring in for him. Anthony Martial scored his header, but barring that he wasn’t anywhere near it. Give him credit for the goal, but he offered nothing else.

When you look at Chelsea, you’re not going to get into the top four with Michy Batshuayi up front. He’s not good enough, so you’re looking at two teams who are so weak up front, that I honestly think Sheffield United have every chance this season. Neither Chelsea nor Manchester United seem to have the guile to break teams down.

I know Tottenham create chances and score goals but I look back at the Aston Villa game, and they were on the rack at 1-0. For 30 minutes, Villa were all over them, and if they go 2-0 up, it’s a different game. Spurs only won through bad defending.

I give Sheffield United every chance as these teams aren’t dominant anymore. You’re talking about three of the biggest clubs in the league – Manchester United, Tottenham and Chelsea – and one injury means they’ve not got a centre forward.

Marcus Rashford is out for United, Tammy Abraham is out for Chelsea and Harry Kane is out for Tottenham. How are you supposed to win anything with no centre forward? [Heung-Min] Son does a great job, he’s a proper player, but you wouldn’t buy him to play him up front for a season, and now he’s out injured which is a massive blow.

You look at Sheffield United, they’ve got three or four centre forwards. They’re not top-drawer strikers but they can come in when someone’s injured. You won’t see them playing with no centre forward up front.

Chelsea could quite easily beat Tottenham on Saturday, especially with Son’s injury, and all of a sudden it’s a different story. Had they also won against United, you’d be saying it’s done and dusted.

At the moment, they just can’t break any teams down and aren’t taking their chances. I’m not seeing enough movement. People are only making runs when they’ve got the ball. When they get to the edge of the box, it’s all too nice, that’s the problem.

Abraham had been struggling a bit anyway – he wasn’t setting the world alight when he got injured. He became a better player on Monday night, when he’s out of the team but he hadn’t been playing well. Manchester United were playing so deep, there wasn’t the need for pace up front – I didn’t think Pedro would ever play again, so I was shocked to see the team news.

Manchester United must draw a line with Raiola

I agree with Manchester United’s stance on dealing with Mino Raiola.

You’re talking about a £100m World Cup winner in Paul Pogba and his agent runs the show. The player should be big enough to say to his agent, ‘wait there – I’m playing for one of the biggest clubs in the world here – keep your nose out’.

It’s embarrassing. Roy Keane and Jamie Carragher were right with what they said on MNF – you’ve got to draw a line with agents. You can’t keep paying an agent all this money just to get a player in. You’ve got to draw the line somewhere.

They’d only be paying the price if they don’t get into the top four, but who’s to say how Erling Haaland (a Raiola client) would do it in the Premier League? It’s not the Bundesliga. This is the hardest league in the world, so who’s to say he would be scoring all those goals here?

Could there be an exodus at Manchester City?

They’d have won the league again, and the feeling would then be that winning the Champions League is all that’s left.

Of course, it all depends on if this team now wins the competition this season. But I don’t know if they’re going to get away with it – I’m not sure if that ban is going to get overturned.