Home Sport Brees coming back for 2020 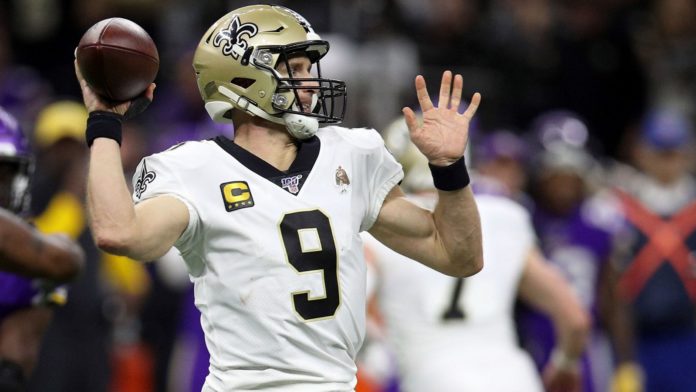 New Orleans Saints quarterback Drew Brees will be back in 2020.

The 41-year-old announced Tuesday he was set to return and make “another run” with the Saints. However, Brees is an unrestricted free agent and not under contract for the upcoming season.

But he said in January that he was down to two options: retirement or playing another season in New Orleans.

Brees posted a scenic mountain and ocean-side landscape photo from his recent Hawaiian vacation to Instagram with the caption: “My feelings about the 2020 season! I look forward to the grind and the journey, for the reward at the end will be worth it!!! Love you #WhoDatNation. Let’s make another run at it!”

Brees enters his 20th season and made $25m in 2019, when he was the 10th-highest-paid quarterback in the NFL. According to Spotrac, Brees has career earnings of $244.7m, highest among all active players.

Tom Brady, a free agent who has spent his entire career with the New England Patriots, has made about $235m.

In addition to Brees, Saints quarterbacks Teddy Bridgewater and Taysom Hill, who played multiple positions, are free agents. Hill said he plans to enter free agency seeking an opportunity to play quarterback. Bridgewater declined an offer from the Miami Dolphins to return as Brees’ backup in March 2019.

Brees is only nine pass attempts from overtaking Brett Favre for the all-time record. He has three prestigious passing records already, including 77,416 yards passing, 547 passing touchdowns and 6,867 completions.

Selected in the second round of the 2001 NFL Draft by the San Diego Chargers, Brees entered free agency in 2006 and joined the Saints over the Miami Dolphins.

Why it’s vital for black people to ‘feel seen’ and ‘feel...