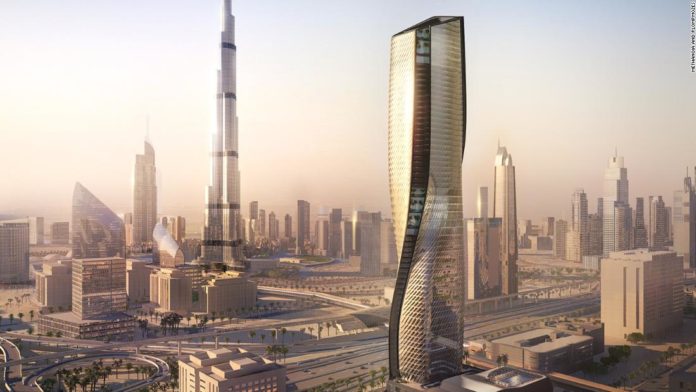 How to stand out beside the world’s tallest building?

That was the challenge facing Dutch architecture firm UNStudio when it received a commission to build a new tower on Dubai’s Sheikh Zayed Road, directly opposite the 828-meter Burj Khalifa.

But the client, state-owned developer Wasl, was not fixated on height, says UNStudio founder and principal architect Ben van Berkel.

The brief was for a “strong, sustainable concept,” he recalls, and a building that would connect with the local area.

Wasl Tower will be complete in August 2021, and van Berkel is confident it delivers on those requirements, as well as a distinctive look.

The $400m, 302-meter skyscraper employs a twisting, asymmetrical design inspired by the “contrapposto” pose commonly used in classical sculpture, intended to give an effect of dynamic motion.

The building will also feature one of the world’s tallest ceramic facades composed of clay-based materials, with an overlaid lacework of fin-shaped tiles. These are designed for energy efficiency and comfort, providing shade from the fierce Dubai heat that reduces the need for air conditioning, and deflecting light into the interiors, according to the architects.

Ceramic materials also offer benefits outside the building, says van Berkel. Whereas glass facades reflect heat loads into the surrounding area — with disastrous effects in some cases — ceramic stone “protects the heat load going into the building and reduces the heat load in urban areas around the building.”

The architect has other reasons to favor ceramics, which he says can be stronger than concrete and sufficiently malleable to allow for “fantastically innovative” shapes.

The design offers another striking feature. The shape and composition of the ceramic fins will reflect sunlight in rhythmic patterns to give the appearance of a building that breathes, the architects claim. A similar effect will be produced at night by LED lights behind the facade.

The tower design was inspired by the asymmetrical, “contrapposto” pose commonly used in classical sculpture. Credit: Methanoia and Plompmozes

Beyond ceramics, Wasl Tower will also showcase innovation in the form of a “vertical boulevard” running the full height of the building. This “open seam” effect is created by a “stacking of outdoor balconies, forming a green vein along the building’s silhouette.”

The tower will be occupied by a branch of the luxury hotel chain Mandarin Oriental, as well as offices, private apartments, and rooftop pools. A pedestrian bridge will connect the building to Burj Khalifa metro station.

Connecting to public transport infrastructure was partly a response to the client’s request for a building that would appeal to long-term residents, says van Berkel.

“If you have too many short stay visitors it can hollow out the social glue of a city — people leave the city centers and can’t really use the cafes and restaurants,” he says. “The areas around transport systems need life with the right programs where people see each other and stay in the area.”

Heger to return to Swan Hellenic ahead of relaunch

From pagan spirits to Wonder Woman: A brief history of the Halloween costume

A world-famous Congolese style tradition is changing with the times