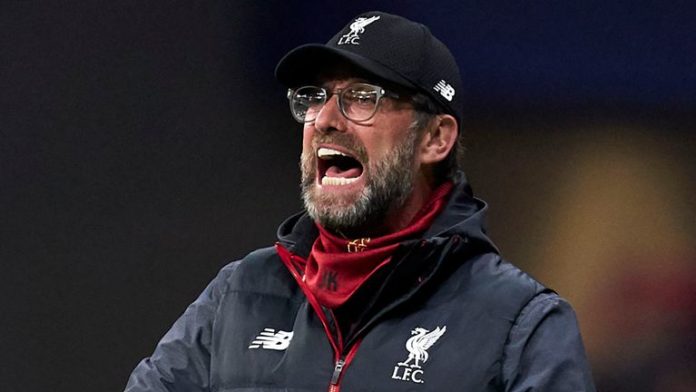 Jurgen Klopp is relishing the Anfield reception that awaits Atletico Madrid ahead of Liverpool’s bid to overturn a first-leg deficit in their Champions League last-16 tie.

Liverpool returned to the scene of last summer’s sixth European Cup triumph but suffered just their third defeat of the season at the Wanda Metropolitano, as a ferocious reception on and off the pitch, and Saul Niguez’s fourth-minute strike, inspired Atletico to a 1-0 victory.

Liverpool host Diego Simeone’s side in the return leg on March 11 and Reds boss Klopp is hopeful a similar performance from his players, coupled with Anfield’s infamous atmosphere, could turn the tie around.

“I have no problem with the result,” Klopp told his post-match press conference. “The intensity of the game was absolutely exactly how it should be.

“We put the opponent under pressure in the final third but were not clinical and didn’t have enough clear-cut chances. We had chances but not enough, but that is normal.

“Staying in a game like this is development. We’ve had games in atmospheres like this, lost our focus a little bit and then the opponent could score a second one, but it didn’t look like that tonight.

“It’s half-time, we’re 1-0 down, but we wouldn’t give up at half-time so why would we give up now. And, even better, the second half will be played in a different stadium, our stadium.

“That will be different, and Atletico will feel that. That is what we are looking forward too. I saw a lot of happy faces from Atletico, I get that because it was a big win, but it is not over yet.”

Liverpool welcomed Sadio Mane back into the starting line-up after his cameo from the bench at Norwich moved the Reds 25 points at the top of the Premier League on Saturday.

Mane’s first start this month would only last 45 minutes though, as Klopp brought on Divock Origi in place of the Senegal international at half-time.

The substitution raised fears of a reoccurrence of the injury Mane sustained against Wolves in January, but Klopp confirmed he withdrew the forward, who had already been booked, to avoid picking up a second yellow and a subsequent suspension for the return leg.

“I was afraid that his opponent would go down even if Sadio took a deep breath,” the Reds boss added. “I didn’t want to have that situation, so that is why we took him off.”

Jordan Henderson was another player who failed to last the duration of the game in Madrid. The Liverpool captain was forced off with an injury 10 minutes from time, though Klopp was optimistic over the prognosis.

“Jordan Henderson felt his hamstring, unfortunately,” he said. “He was not too concerned, but it was enough to come off, obviously.”

Liverpool now host West Ham on Monday Night Football, live on Sky Sports Premier League, while Atletico host Villarreal on Sunday evening at 8pm in La Liga. The second leg of this fixture at Anfield is on March 11 at 8pm.