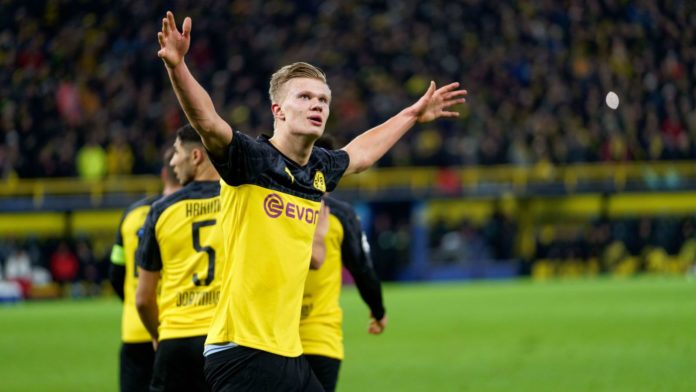 After another record-breaking night for Erling Haaland, we take a look at the numbers behind his incredible start to life at Borussia Dortmund and his season so far…

Haaland struck twice on Tuesday evening as Borussia Dortmund secured a 2-1 home victory over Paris Saint-Germain in the first leg of the Champions League round-of-16 tie.

The prolific Norwegian took his tally to 11 goals in seven matches in all competitions on his Champions League debut for the Bundesliga side as more record tumbled.

Haaland has scored 11 goals in seven appearances for Borussia Dortmund – the most of any player for a club within the top five European leagues (all competitions) since his debut in January.

No other player of a Bundesliga side has ever scored 11 goals in their first seven games in all competitions.

He is also the first Dortmund player ever to score on his debut in the Bundesliga, DFB-Pokal and the Champions League.

10 – Players to score 10 goals in their first season in the European Cup/Champions League:

Haaland has now scored 10 Champions League goals in just seven appearances, reaching the tally four games quicker than any other player in the competition’s history.

He is only the second player to score 10 Champions League goals as a teenager, after Kylian Mbappe (13), and the first to do so in a single campaign in the competition.

Most goals across the top five European leagues (all competitions) since Haaland’s debut for Dortmund:

With 10 Champions League goals to his name, the Norwegian striker has more goals in the competition than Atletico Madrid (9) and Barcelona (9).

After his double against PSG, Haaland now has 39 club goals to his name so far this season.

In Haaland’s senior club career so far, he has played 100 games, scoring 60 goals. He also has eight hat-tricks to his name.