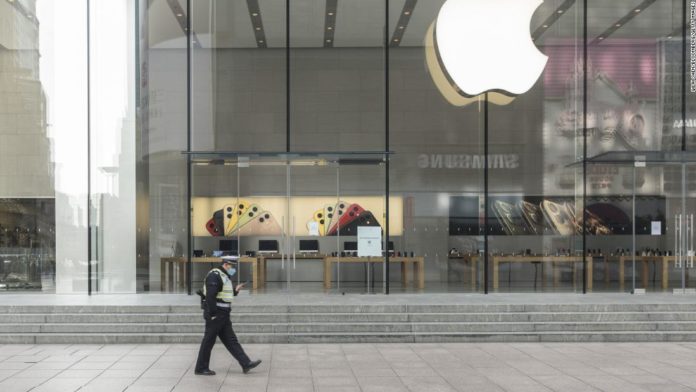 A string of US companies has been cautioning investors that first quarter sales could take a hit from the spread of coronavirus. Apple (AAPL) just made it all more real.
The $1.4 trillion company put out a surprise investor update on Monday, warning that it no longer expects to meet the revenue guidance provided last month.
Notably, the company isn’t just concerned about a hit to demand for Apple products within China — which had been expected, since all its stores there have been closed. It also faces issues with iPhone production. Such supply chain issues have been a chief concern for economists tracking broader fallout from the new coronavirus.
“Work is starting to resume around the country, but we are experiencing a slower return to normal conditions than we had anticipated,” the company said.
Apple said that even though its manufacturing partner sites are located outside the Hubei province at the center of the outbreak, and all those sites have reopened, ramping back up has been difficult.
JPMorgan analyst Samik Chatterjee told clients that the long-term outlook for the company “remains unchanged.” The likely debut of 5G-enabled iPhones later this year is still poised to boost demand, and Apple is less reliant on selling iPhones in China than it was a year ago, he said.
But investors are wary. Shares of Apple fell 2.6% Tuesday, wiping out $34 billion in market value and dragging US stocks lower across the board. Hong Kong’s Hang Seng closed down 1.5%.
“It’s a supply chain issue as well as an in-China sales issue,” Nicholas Hyett, an equity analyst at Hargreaves Lansdown, told me. “That’s what makes it different from what we’ve seen before.”
Piling on: HSBC (see below) and mining giant Glencore (GLCNF) also talked about how the coronavirus could hurt their business on Tuesday. Glencore CEO Ivan Glasenberg maintained that it’s “a bit too early” to nail down the impact, but noted that China has effectively taken two extra weeks after the Lunar New Year holiday to get back up and running. No shipments have been canceled, he said.

Big changes are coming to HSBC (HBCYF) after the London-based bank reported a 33% plunge in profit in 2019, my CNN Business colleagues Michelle Toh and Hanna Ziady report.
Major restructuring: The bank said it would cut around 35,000 jobs over the next three years, or about 15% of its global workforce. It also plans to scrap about $100 billion in assets by the end of 2022.
“Parts of our business are not delivering acceptable returns,” interim CEO Noel Quinn said in a statement. “We are therefore outlining a revised plan to increase returns for investors, create the capacity for future investment, and build a platform for sustainable growth.”
Shifting focus: HSBC plans to trim underperforming divisions and pivot more dramatically to Asia. The bank said it would put more investment banking resources there and in the Middle East, building up its position in emerging markets. It will also make cuts to its sales and trading and equity research units in Europe while closing a third of US branches.
Not helping: The bank had already been hit by protests in Hong Kong and low interest rates, which hurt lending profits. Now there’s the coronavirus outbreak. HSBC warned Tuesday that it was “causing economic disruption in Hong Kong and mainland China and may impact performance in 2020.”
Shares in London fell about 6.1% in early trading.

Jeff Bezos is throwing his wealth into the fight against climate change, months after Amazon employees publicly pressured him and the company to do more to address the issue.
The Amazon (AMZN) CEO on Monday announced a new fund to back scientists, activists and organizations working to mitigate the impact of climate change, my CNN Business colleague Rishi Iyengar reports. Bezos said in an Instagram post that he will commit $10 billion “to start.”
The initiative, called the Bezos Earth Fund, will begin giving out grants this summer. The commitment constitutes less than 8% of the world’s richest man’s estimated $130 billion net worth. Even so, it is one of of the biggest charitable pledges ever, according to a ranking by the Chronicle of Philanthropy.
Amazon’s recent stock rise certainly gives Bezos more room to run (he holds a 15% stake). Shares of the company are up 15.5% this year, while the broader S&P 500 has gained just 4.6%.
Real change? While $10 billion is a lot of money under any circumstances, what could matter more than a private contribution is how Amazon itself approaches climate change.
Walmart (WMT) reports earnings before US markets open. Groupon (GRPN) and Lending Club (LC) follow after the close.
Also today:
Coming tomorrow: How strong is the US housing market? Fresh data will clue us in.