Home Sport ‘One per cent gains will make the difference’ 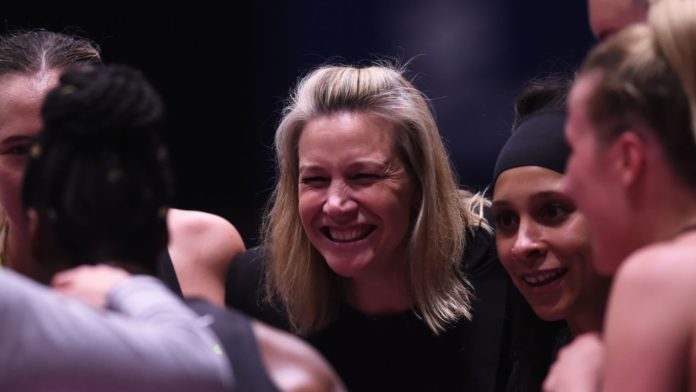 Saracens Mavericks are energised and ready to step up in order to break through the glass ceiling in the Vitality Netball Superleague.

There was a buzz around the University of Hertfordshire venue last Wednesday as head coach Kathryn Ratnapala and her players entered for their morning training session.

For the Mavericks, this mid-week time on court follows a weights session and gives them a chance to focus on individual and team specifics.

Like all Superleague teams, they are eager to get to Birmingham for the Season Opener on Saturday and are keen to ensure that this season does not follow the pattern of the previous two.

“We had a debrief on last year and we’ve been really honest with ourselves and each other about what we want out of this new season.

“We have a great group of athletes and it’s been a really fun but hard-working pre-season so I’m really excited to get onto court with the squad.”

Ratnapala and her players’ debrief will not have been an easy one as the ambitious franchise had missed out on their target of the play-offs – again.

Despite having had a storming start to the 2019 season and looking like favourites for a top-four finish, three consecutive losses destabilised them.

They ultimately had too much to do in the denouement of the regular season and the head coach reflects honestly about missing out.

“The last couple of years have been such a disappointment. For us to finish fifth two years in a row, we know we are better than that,” Ratnapala says.

“For the players to want to stay this year, because they believe that we are better than our past results, means a lot.

An afternoon awarding the individual achievements of players from our Minis, Futures & U17/U19/U21s through to VNSL pic.twitter.com/q6LjPu5chy

“We’re excited, we have a new fresh air about the squad and our workings with Saracens have given us a lot of new ideas and approaches this year.

“I’m just looking forward to getting through a season with the squad really stepping up, delivering on court and staying as a collective unit.”

This time, when it comes the Superleague season and their target, the Mavericks’ goal posts have shifted. They have shifted for a reason, as Ratnapala explains.

“We are setting ourselves a target of top three this year,” she says.

“Previously, it has always been top four, but we’ve missed out. The reason is the margins between the teams are so tight and the level of competition getting better and better.

“That’s really exciting, and it makes for great viewing but from our side, it means that we need to keep on pushing and stepping up for each game.”

It’s the one per cent gains that are going to make the difference. It’s making sure that we are getting together and getting over the line together. There’s a very different feel right now, which is really positive.

It’s widely recognised that doing the same thing over again and expecting different results is not wholly sensible.

There is absolutely no chance of Ratnapala and the Mavericks falling into that trap though.

Instead, they have introduced new methods into training and have looked at the ways they evaluate themselves.

“We’re going to be even more honest with ourselves and each other and we have the squad to do that this season. We had a bit of fun with it in pre-season and it’s been a really positive tool.

“It’s about making sure that we’re all accountable for every minute that we’re on court. It’s going to be about small margins it really is.

“It’s the one per cent gains that are going to make the difference, from the different types of sessions that we’re doing to making sure that we’ve got the honesty around the room.

“Those things may sound small but actually they’re huge.”

The Season Opener at Arena Birmingham will be the first chance for the Mavericks to see this process in league action. Severn Stars will be their opponents, which in itself adds a different dynamic.

“They’ve got a completely new-look squad this year so it will be an interesting one,” the head coach says.

“We’re looking at them and they are an unknown team with new signings this year. So, we’re just focusing on ourselves and that isn’t a bad place to be.”

Sky Sports is your home of netball and is back on your screens this month when the new Vitality Superleague season gets underway with all 10 teams in action at the Season Opener from Arena Birmingham on Saturday, February 22.