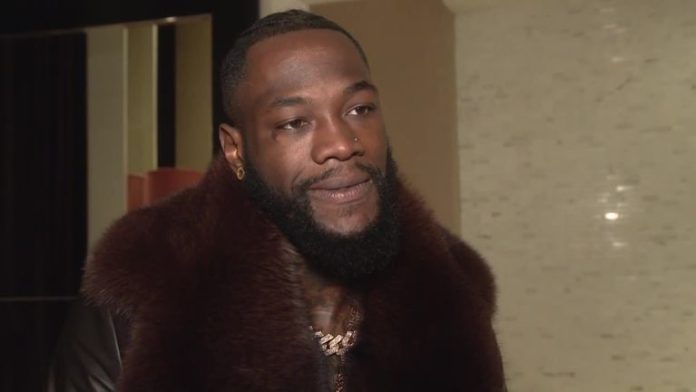 Ahead of Saturday’s rematch between Deontay Wilder and Tyson Fury, we list the American heavyweight’s top 10 knockouts.

Tyson Fury felt every part of Wilder’s rasping right hand in the final round of their thrilling draw in Los Angeles 14 months ago.

Fury sensationally got back up, unlike the rest of Wilder’s opponents who all have one thing in common – they’ve all been knocked out by him.

Here are 10 of the Bronze Bomber’s best knockouts.

It only took him two rounds to make a statement, and what a statement it was.

In the second round, Wilder sized up Cox, pushing him back with a long powerful jab.

A second left hand put Cox back onto the ropes, lining up a perfect opportunity for Wilder to unleash what has become his signature move – the overhand right.

From the very start of his boxing career, it was clear that Wilder’s hand was going to be a weapon of destruction.

Last year, Wilder controversially spoke of wanting to have “body on his record” in the ring.

He might already have had one if Liakhovich didn’t eventually get up.

Midway through the first round against the Belarusian, Wilder came from being on the back foot to being on the front foot by again using his long jab.

Liakhovich stumbled onto the ropes where a swinging right hand clobbered against the side of his head.

In the first three years of his boxing career, Wilder was making the heavyweight division look a piece of cake.

He made it 20 knockouts from 20 when he met Long, and he did it inside the first round.

The first minute of the fight was as excepted, with both fighters testing their jab.

As he repeatedly jabbed away at Long, he was lining up his right hand which he fired from his lats like a bow and arrow.

Long’s chin was the target, and Wilder hit the bullseye.

A complete mismatch in an exhibition for Wilder.

Wilder’s speed was pulling Arnold all over the ring, and it was only a matter of time in the first round that he connected clean.

He did just that one minute into the bout with a quick left right combination that left his opponent star fished on the canvas.

It must have been one of the longest minutes of Arnold’s lifetime.

In January 2015 on Muhammad Ali’s 73rd birthday, Wilder comfortably outpointed Stiverne to claim the famous green and gold belt his idol once held.

It’s not gone out of Wilder’s grasp since.

Stiverne, along with Fury, is the only man to last 12 rounds against Wilder.

But Stiverne didn’t last longer than 13.

In the first round of their rematch in 2017, Wilder hunted him down from the first bell.

Just inside the final minute of the round, Wilder floored Stiverne before dropping him again seconds after he rose to his feet.

Then in the last few seconds of the round, the Alabaman went in for the kill as another flurry of punches sunk the Canadian to his knees.

Wilder is nine inches taller than Sheehan, and he made the height difference count to say the least.

As well as the height difference, there was a massive difference in the power of the two fighters.

In truth, Sheehan didn’t look at all confident from the first bell, and less than two minutes in he met his fate.

The jab unsettled Sheehan, and the right hand that Wilder swung from down near his right knee put him to sleep quicker than a dose of general anaesthetic.

Ortiz had won the first six rounds, and going into the second half of the fight Wilder had some serious work to do to level the fight up.

Towards the end of the seventh round, he more than levelled the fight up – he called an immediate halt to the bout.

Out of nowhere, he dispatched the tough Cuban when the spotlight was on him the most to set up the rematch with Fury.

If rematches are anything to go by, Fury is in trouble on Saturday night.

Price was unbeaten coming into this one, and the fact he could match Wilder in height and reach made the bout an intriguing one.

Theoretically, both fighters were evenly matched before the bout.

After the bout, they were anything but.

Price was landing some shots on Wilder, but in the third round Wilder took matters into his own hands when he ran forward like a batsman dancing down the wicket to hit a six.

Instead of swinging the bat to meet the ball full on, Wilder swung his right hand which met Price’s head full on.

“Wilder hits Breazeale so hard they are feeling it in Brazil.”

While Showtime’s commentary of Wilder vs Breazeale might have been slightly hyperbolic, it’s no exaggeration to say Breazeale got brutally knocked out by one of the hardest punches that has ever connected with a man in a boxing ring.

Breazeale, who was stopped by Anthony Joshua in the seventh round in 2016, was three years later stopped by Wilder in the first.

The first round was like a throwback to the very origins of boxing in Ancient Greece.

It was then the turn of Wilder again, and his next shot would be final shot of the fight as he made a big statement to the rest of the division.

In the first eight rounds, Szpilka produced a respectable account of himself in New York and shown his steel by soaking up a lot of Wilder’s shots.

One shot he couldn’t soak up came in the ninth round.

With Wilder positioned on the ropes and on the back foot, the Pole wildly moved towards him.

The Bronze Bomber had seen it coming, so he reacted by side-stepping the punch and detonating his right hand.

The blow landed clean and left Szpilka in a bad state, he had to be carried out of the Barclays Centre on a stretcher.

At the end of the bout, Fury stepped in the ring and confronted Wilder – the origins of a classic heavyweight rivalry.

Ransley retires due to Tokyo postponement

Selena Gomez shares she has bipolar disorder in conversation with Miley...

There are fears a coronavirus crisis looms in Tokyo. Is it...