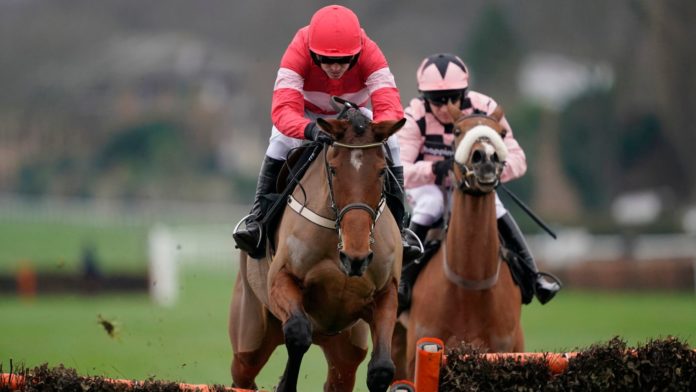 Laurina ran below her best again when she could finish only third behind her stablemate Elfile in the Quevega Mares Hurdle at Punchestown.

The two Willie Mullins-trained inmates had the five-runner race between them after three out before Laurina’s challenge flattened out on the run-in.

Elfile (6-4) was too strong for Laurina and pulled away to score by two and a half lengths from Black Tears, who stayed on to claim second place by three-quarters of a length.

Laurina, who took this Grade Three prize in 2019, was on a retrieval mission after being pulled up twice over fences.

Mullins said: “That was a good performance by the winner and will probably book her ticket for the Mares’ Hurdle. I’d like to go there and I don’t think there is any other race for her in Cheltenham.

“She’s improving and probably has a future over fences next season. A longer trip would be better for her.”

Elfile was cut to 12-1 from 16-1 for the Close Brothers Hurdle, registered as the David Nicholson Mares’ Hurdle, at Cheltenham with Paddy Power.

However, Mullins was satisfied with Laurina’s performance.

“I was happy enough that Laurina at least ran a race today. Her training schedule has been very hit and miss and this race was an afterthought to see how she would handle going back over hurdles,” said the Closutton handler.

“She might be better staying over hurdles, but I’ll have to have a chat with connections.

“Paul (Townend) was very happy with her for a long way today. It’s obviously a long way below her best, but at least she didn’t pull up like her last two runs over fences and we can use her preparation as an excuse.”

From homeless to undisputed champion

Everlane’s Best-Selling Face Mask Is Now Half Off for a Limited...

Six Britons among 89 foreigners arrested at Thai bar after COVID...

Christina Anstead is back to her maiden name on Instagram amid...