Home World In world’s quietest room, the silence is deafening 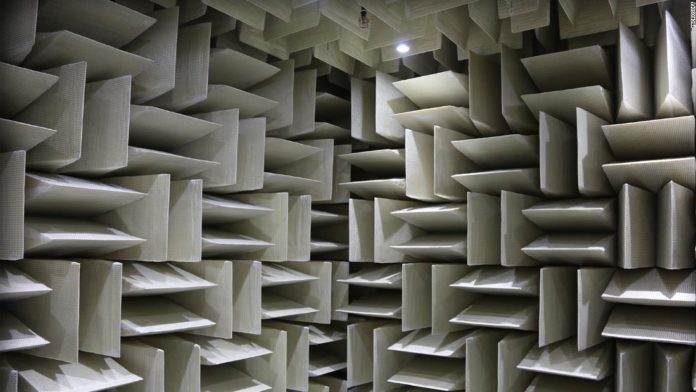 If you stand in it for long enough, you start to hear your heartbeat. A ringing in your ears becomes deafening. When you move, your bones make a grinding noise. Eventually you lose your balance, because the absolute lack of reverberation sabotages your spatial awareness.

In this room at Microsoft’s headquarters in Redmond, Washington, all sound from the outside world is locked out and any sound produced inside is stopped cold. It’s called an “anechoic” chamber, because it creates no echo at all — which makes the sound of clapping hands downright eerie.

The background noise in the room is so low that it approaches the lowest threshold theorized by mathematicians, the absolute zero of sound — the next step down is a vacuum, or the absence of sound.

This is the world’s quietest place.

“As soon as one enters the room, one immediately feels a strange and unique sensation which is hard to describe,” wrote Hundraj Gopal, a speech and hearing scientist and the principal designer of the anechoic chamber at Microsoft, in an email.

“Most people find the absence of sound deafening, feel a sense of fullness in the ears, or some ringing. Very faint sounds become clearly audible because the ambient noise is exceptionally low. When you turn your head, you can hear that motion. You can hear yourself breathing and it sounds somewhat loud,” he said.

In the real world, Gopal explained, our ears are constantly subject to some level of sound, so there is always some air pressure on the ear drums. But upon entering the anechoic room this constant air pressure is gone, since there are no sound reflections from the surrounding walls.

“This is a novel experience,” he wrote.

The entrance to the chamber. Credit: Microsoft

To achieve extreme silence, the room is designed with an onion-like structure that isolates it from the rest of the building and the outside world.

It’s made of six layers of concrete and steel and it is somewhat disconnected from the surrounding building, because it sits atop an array of vibration damping springs. Inside, fiberglass wedges are mounted on the floor, ceiling and walls to break up sound waves before they have a chance to bounce back into the room. The floor itself is simply a grid of sound-absorbing suspended cables.

“The design, planning and construction took a little over one and a half years,” confirmed Gopal.

“I needed a good location on campus where the measured noise levels inside the building were adequately low. (…) I needed to plan the inside of the building so that I could nest the chamber six levels deep. We had to build a special 12″ concrete wall encasing the chamber to block out further ambient sound. Careful attention was paid to every detail that could conduct sound from outside to inside the chamber, such as isolating the sprinkler supply pipes and the fire-alarm sensor, or lining the air-supply and return ducts with additional sound absorbing material.”

The final result? “The noise level measured inside is -20.3dBA. This means that the ambient noise in the chamber is 20.3dB below the threshold of human hearing.”

By comparison, one of the quietest sounds that can be heard in a quiet room, calm breathing, clocks in at 10dB.

Microsoft’s chamber is currently registered in the Guinness World Record as the world’s quietest place, a title it claimed in 2015 at the expense of a similar chamber at Orfield Labs in Minneapolis. But unlike Microsoft’s, that chamber is open to the public, which has turned it into a small tourist attraction.

“We get thousands of requests. Members of the public visit from around the world almost every week, and they are just about always excited by the experience. There is no skeptical reaction, as this is simply a bodily experience, and there’s nothing to learn or believe,” wrote Steve Orfield, who constructed his own lab and anechoic chamber in a building that was once home to Studio 80 — a renowned recording studio where Bob Dylan, Prince and Cat Stevens have recorded songs.

According to Orfield, the experience is somewhat influenced by the place where one was immediately before entering the chamber, because coming from a loud environment will make it harder to fully perceive the quietness. The quality of one’s hearing also counts: the older you are, the harder it is to adapt and fully appreciate the quietness.

He also recommends turning off the lights. “Most of the experiences of sensory deprivation include turning off all lighting, so that you are in aural and visual quiet, with no sensory noise. Under this circumstance, walking around the interior will make most people lose their balance after a short while.”

Orfield, who has done research on the impact of noise in people with degenerative diseases such as dementia, also noted that visitors who suffer from autism, ADHD and other disabilities of anxiety and hyper-sensitivity tend to find the chamber calming and peaceful.

What are they used for?

Anechoic chambers are generally used to test noises and sounds coming from a variety of products with a high degree of scientific reliability.

Microsoft uses it for audio equipment such as microphones, receivers, headphones and speakers, or to analyze clicks and hums from computing devices like keyboards, mice, fans and backlight modules on touch panels and displays. Among the products that have benefited from the chamber are the Surface line of tablets, the Xbox gaming console and the HoloLens VR goggles, but also software where the audio component is dominant, like Skype and the Cortana virtual assistant.

Since the chamber at Orfield Labs is the only accredited one in an independent lab in the United States, it attracts an even wider range of businesses and products: medical defibrillators, sleep-apnea machines, hearing aids, heart valves, appliances, automotive parts, computers and hard drives.

Despite rumors to the contrary, there is no “world record” for time spent in the chamber consecutively by a person, and such challenges are not encouraged, although according to Orfield he receives many requests from people who want to “beat the record.”

“I’ve spent about 45 minutes in the chamber, and since I have a mechanical heart valve, I can always hear it clearly,” wrote Orfield.

“The longest continuous time anyone has spent inside the chamber is about 55 minutes,” confirmed Gopal at Microsoft.

“I have noticed that there are several folks who can stay inside for 30 minutes or so. But others have asked to go out within the first few seconds.”