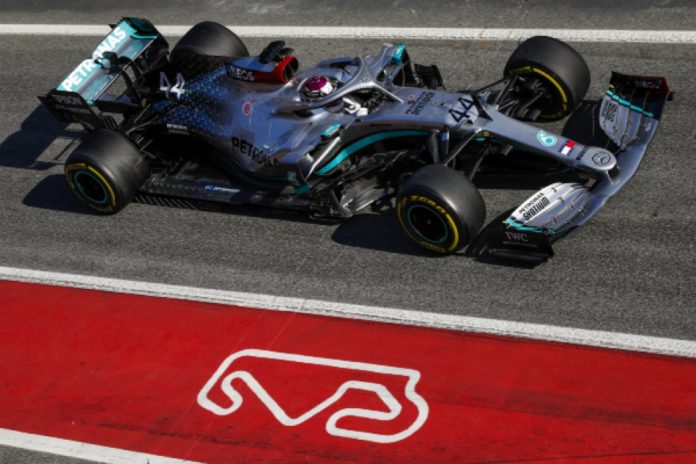 With regulations largely stable for 2020 reliability was impressive and with no red flags or major technical issues hampering running, the grid’s 10 teams managed impressive mileage, with each passing the 100-lap barrier at the Circuit de Barcelona-Catalunya.

It was Mercedes who managed the most, though, with Bottas getting through 79 laps in the morning to lead the standings at the lunch time mark before Hamilton added another 94 in the afternoon to bring the team’s total to 173. Hamilton’s table-topping time was set midway through the afternoon session on Pirelli’s C2 compound.

Sergio Pérez took third place for Racing Point, with the Mexican finishing just six hundredths of a second behind Bottas in the Silverstone team’s new RP20 car. Perez set his time on the C3 compound in the morning session. Lance Stroll took over in the afternoon and followed Pérez’s 58 laps with 52 of his own. The Canadian ended the session in P10, 1.3s off Hamilton’s pace.

Fourth place in the session went to Red Bull’s Max Verstappen. The Dutch driver posted the largest number of laps for a single driver, 168, and over the course of a marathon session he posted a C3-shod time of 1:17.516 to finish half a second behind Hamilton.

Daniil Kvyat was fifth quickest on day one for AlphaTauri, the squad formerly known as Toro Rosso. The Russian driver worked through 115 laps and finished seven tenths of a second off the pace.

Kvyat ended the day 0.144s clear of sixth-placed Carlos Sainz of McLaren, with afternoon Renault driver Daniel Ricciardo seventh, three hundredths of a second ahead of new team-mate Esteban Ocon who drove in the morning.

George Russell ended a solid first day of testing for Williams in ninth place, having completed 73 laps through the morning. New team-mate Nicholas Latifi then added a further 63 laps in the afternoon. It was a far brighter start for the team than last year when late delivery of its 2019 car led to it missing the first two days of pre-season testing.

With Stroll rounding out the4 top 10, Ferrari had to settle for P11 as Charles Leclerc opened the Italian squad’s pre-season account in place of the unwell Sebastian Vettel.

Leclerc got through an impressive 131 laps in a busy day that included a lengthy pause after lunch, with the team staying in the garage for more than an hour at the start of the afternoon session.

Robert Kubica took 13th place at the end of his first outing as Alfa Romeo’s reserve driver with the Pole finishing ahead of Haas’ Kevin Magnussen and Alfa team-mate Antonio Giovinazzi.