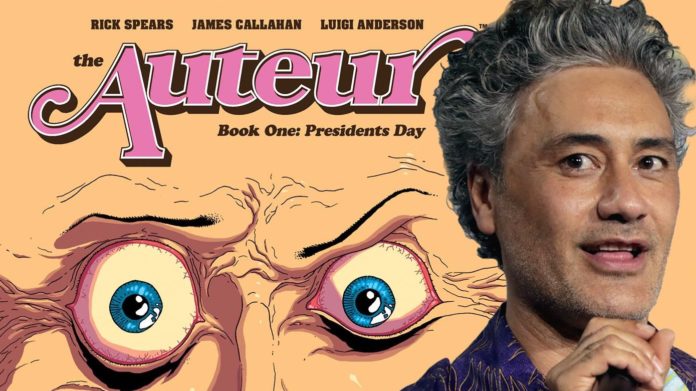 Last week we learned about Showtime’s new series The Auteur, from Academy Award-winning Taika Waititi, but details were relatively scarce regarding the project outside of Jude Law’s involvement. There were rumblings that it was a Hollywood satire, possibly based on the Rick Spears graphic novel of the same name, and, wouldn’t you know it, those assumptions were correct.

Deadline confirmed as much and revealed that Showtime has ordered multiple scripts of the half-hour series, and even added a synopsis: “Based on the graphic novel by Rick Spears, James Callahan and Luigi Anderson, The Auteur is described as a gonzo horror-comedy, a twisted romance and a glamorous, high wire act of biting satire. In it, desperate to make a great horror movie after a massive bomb, a film producer accidentally traps his production on a backlot with a serial killer.”

“The Auteur unites the wildly imaginative filmmaker Taika Waititi and the barbed wit of Peter Warren with the undeniable Jude Law in a bloody love letter to the movies that will make you simultaneously die laughing and want to run for your life,” said Showtime’s Scripted Programming Executive Vice President Amy Israel.

Waititi will direct the series and co-write alongside Peter Warren (Ghost Team). Law will play the title character.

Spears’ graphic novel followed producer Nathan T. Rex, whose career spirals downhill as he attempts to resurrect his career by enlisting the aid of serial-killer-turned-murder-consultant Darwin, his assistant Igor, narcotics from Doctor Love, and the lovely actress Coconut. T. Rex will do anything to keep his career from imploding, which is bad news for everyone.

Law can be seen in HBO’s The New Pope and the Blake Lively actioner The Rhythm Section.

Waititi recently won an Oscar for Best Adapted Screenplay for his work on JoJo Rabbit. He is also prepping Thor: Love and Thunder for Marvel.

As rivalry with Washington heats up, Beijing commemorates ‘victory’ in ‘war to resist US aggression’