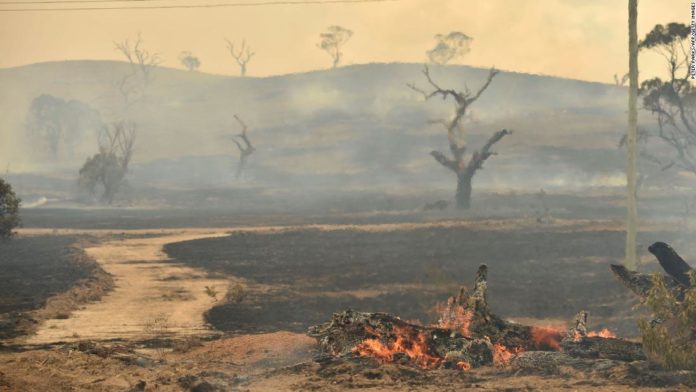 The inquiry does not appear to focus specifically on the government’s climate policy, concentrating instead on “practical action” to improve Australia’s preparedness for natural disasters and future bushfire seasons as the climate becomes more extreme, according to the terms of reference released on Thursday.
“My priority is to keep Australians safe and to do that, we need to learn from the Black Summer bushfires how nationally we can work better with the states and territories to better protect and equip Australians for living in hotter, drier and longer summers,” the Prime Minister said.
Since September, Australia has been battling its worst wildfires in decades, exacerbated by a prolonged drought and record temperatures. More than 18 million hectares (44 million acres) of bush, land and forest have been burned. At least 28 people have died and around 3,000 homes have been destroyed.
Scientists have unequivocally linked the bushfires to human-induced climate change, and are calling on Australia’s leaders and policymakers to take “genuine concerted action to reduce global emissions of greenhouse gases.”
In a press conference announcing the commission on Thursday, Morrison said the inquiry “acknowledges climate change, the broader impact of our summers getting longer, drier and hotter and is focused on practical action that has a direct link to making Australians safer.”
“That’s why we need to look at what actions should be taken to enhance our preparedness, resilience and recovery through the actions of all levels of government and the community, for the environment we are living in,” he said.
The commission will be tasked with examining, “Australia’s arrangements for improving resilience and adapting to changing climatic conditions.” It will also look at what needs to be done to mitigate the impacts of natural disasters.
The main focus of the inquiry will be on improving coordination between state and federal governments on preparedness, recovery, resilience, and hazard reduction measures.
In a statement, Oxfam Australia’s Chief Executive Lyn Morgain said the commission was a “missed opportunity to reset Australia’s climate policies” and the focus was “on the symptoms and not the causes.”
“Oxfam Australia is therefore disappointed that the Commission has not been asked to look into Australia’s contribution to the global climate crisis, and will be focused more narrowly on adaptation, resilience and response measures,” Morgain said.
Also part of the inquiry is whether the law needs to be changed to clarify which level of government is responsible for responding to disasters. Establishing new federal government powers to declare a national state of emergency and deploying the military during natural disasters will also be investigated.
On Thursday, Morrison said calling out the military to help fight the fires was a “constitutional gray zone.”
“Currently, there are no such powers and federal responses are supposed to only be undertaken in response to state requests and authorizations,” he said.
The formation of the royal commission comes as public outrage over the fires has been mounting, with much of the anger directed at Morrison and his alleged inaction over the climate crisis.
Morrison was accused of initially playing down the severity of the bushfires and was widely criticized for refusing to directly link the bushfires to the climate crisis.
The prime minister has since defended his government’s response and set up a National Bushfire Recovery Agency to coordinate the response to rebuilding communities.
His administration has allocated 2 billion Australian dollars ($1.4 billion) in federal aid, to help rebuild vital infrastructure like schools and health facilities struck by fire.
The royal commission into the bushfires is one of several set up on a range of issues in Australia in recent years. Some have questioned their value, saying they are expensive, rushed, and the recommendations often not implemented, according to ABC News.