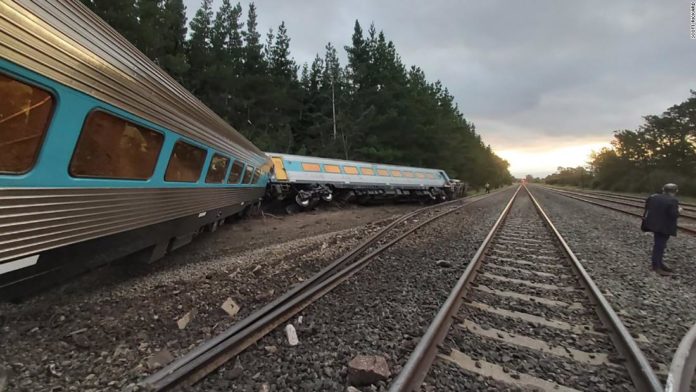 Paramedics were assessing several passengers and have airlifted one person to a hospital in Melbourne, after being called to the scene at 7:45 p.m. local time.
The derailment occurred near the town of Wallan, about 45 kilometers north of Melbourne’s Central Business District. There were around 160 people on board, according to operator NSW TrainLink South.
At least four carriages derailed and the locomotive turned on its side, Keith Pakenham of Country Fire Authority, Victoria told CNN. “It’s done some significant damage to the rail line, ” he said.
Passengers posted images on social media showing the carriages twisted and partially overturned amongst trees on the side of the tracks.
Pakenham described the scene as chaotic but says he believes all passengers have been taken from the train and “most of the passengers are only suffering only minor injuries, our teams were helping evacuate people from the carriages.”
“They’ve all been walked to a local McDonald’s BP station that’s been set up as a medical staging center,” he added.
In a statement, Ambulance Victoria said “a large number of people are being assessed but are not believed to be seriously injured.”
The train was traveling into Melbourne, according to Victoria Police, which was at the scene alongside other emergency services.
The incident has caused severe disruption on the line, with several trains scheduled to enter or depart Melbourne canceled.