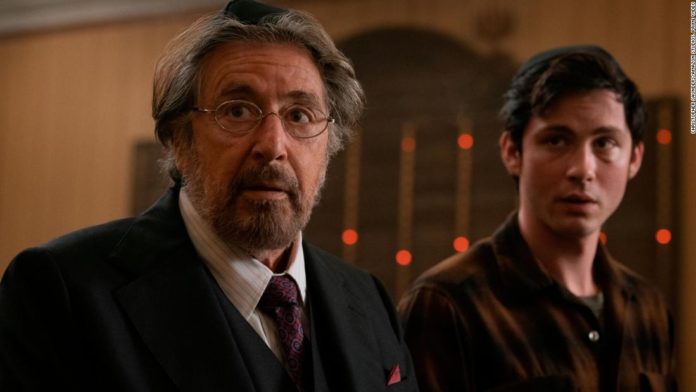 Inspired by true events but clearly heavily dramatized, the series focuses on a ragtag band of Nazi hunters operating in New York in the 1970s. The threat, moreover, is more than just a few guards that escaped, but rather an orchestrated network seeking to establish a Fourth Reich on U.S. soil.
The premiere, a 90-minute effort that too slowly introduces those stakes, fares best in establishing the time and place. It opens with the unwitting hero, Jonah (Logan Lerman), leaving a screening of “Star Wars” with his buddies. It’s the first of many Quentin Tarantino-like references to the era — among them Son of Sam and a later “Saturday Night Fever” dance routine — which only that send-ups of nostalgic pop culture should largely be left to the experts, since it can be heavy-handed here.
Jonah is a comic-book fan, so being thrust into a world of hidden Nazis is a bit like those fantasies come to life, only in deadly fashion that painfully hits home. His guide is Meyer Offerman (Pacino), a wealthy concentration-camp survivor who Meyer likens to X-Men patriarch Professor X and refers to as “Bruce Wayne rich,” and who uses those resources to fund the Nazi-fighting efforts.
Meyer’s group includes a number of fine veteran actors, among them Josh Radnor, Saul Rubinek and Carol Kane, with Dylan Baker and Lena Olin on the opposite side of the fight. Simultaneously, an FBI agent (Jerrika Hinton) begins nosing around a suspicious murder, putting her on the trail of a scheme that’s almost too fantastic to believe, one that’s financially powerful and politically connected.
Beyond the star power on screen, the producers include filmmaker Jordan Peele, working with series creator David Weil.
Still, while exacting vengeance against Nazis is the ultimate in righteous retribution, there’s a little too much torture here for the show’s own good, and a general sloppiness to the storytelling, with each of the five previewed episodes spilling over an hour. That includes several flashbacks to Nazi Germany, illustrating its horrors.
Pacino, certainly — in his first series role, although he has worked extensively for HBO — is in his element as an aging warrior, gently guiding Jonah into a world from which he wanted to spare him.
Dramatically speaking, “Hunters” has the advantage of featuring the ultimate villain, in the chilling sort of way that 1970s thrillers like “Marathon Man” and “The Boys From Brazil” did — the terrifying (and sadly timely) notion of Nazis hiding in plain view.
Thanks to those trappings, and the overall vibe, “Hunters” does sustain interest. It just does so without being as worth catching, given its creative pedigree, as it should be.
“Hunters” premieres Feb. 21 on Amazon.