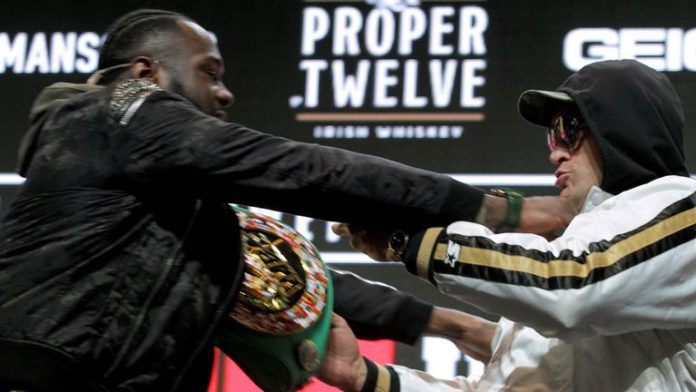 “There will be an opportunity for Deontay to take him out and as you’ve seen with all his opponents in the past, he’ll take it.”

Deontay Wilder has primed his destructive punches for Tyson Fury and will pick a perfect moment to ruthlessly end their rematch, says long-term trainer Jay Deas.

Deas is always a confident figure in Wilder’s corner. In his many roles assisting the WBC heavyweight champion, Deas, a mentor to his hard-hitting charge, believes Wilder will emerge victorious no matter what the task, and that stance is amplified when discussing the Alabama man’s upcoming clash with Fury.

Deas speaks with a glowing freshness when observing Wilder’s imminent clash and he is drawing on the experience of December 2018 when Wilder, behind on the scorecards, found a stunning shot to floor Fury in the final session.

When old pillow hands says he gone knock me out in 2 rounds. ?? #WilderFury2 #BombZquad @Tyson_Fury pic.twitter.com/QORBTWdEx3

Although the punch failed to close the show, it gave Wilder a greater share of the round and allowed him to escape from Los Angeles with his world title. Deas believes the final-round drama will serve his man well on Saturday night.

“Deontay knows what to expect this time around and I think he does the job quick and emphatic,” Deas told Sky Sports.

“A lot is being made of the improvements that can be made by Tyson Fury, but Deontay has also shown me a lot more since that night and I don’t believe he showed everything he’s capable of.

“Did he underestimate Fury? Perhaps, but even with things going against him, he stuck to his task and showed he had the power to turn the fight in his favour.

“Fury was a problem at times, but that won’t be the case this time around and Deontay knows exactly what to expect.”

Since his stunning draw with Fury, Wilder has legitimised himself as the division’s biggest puncher with a number of resounding displays.

In May last year, the 2008 Olympic bronze medallist detonated his right hand off the chin of Dominic Breazeale in the first round for a crushing win and it was a victory that left a congested Barclays Center in Brooklyn stunned.

Months later, Wilder revisited an historic rivalry as he squared off against wily Cuban, Luis Ortiz. The veteran opponent cruised for large parts before he fell victim to a perfect Wilder trap, providing the long-time champion with a flawless 2019.

Wilder was devastating throughout last year, and Deas believes that he’ll carry that impressive form into the Fury fight.

“I’ve said it before and I’m on record saying it, Deontay is not just a puncher. You can’t just walk into a ring swinging shots hoping to get lucky.

“Deontay sets his opponents up and he works himself into a position where he can get his power shots off. His two fights last year were prime examples of him taking a look at his opponent and biding his time before unleashing that right hand.

“Breazeale took it early, but there was patience with Ortiz. Against Fury, there will be an opportunity for Deontay to take him out and as you’ve seen with all his opponents in the past, he’ll take it.

“This is a fight between two world-class heavyweights who do their talking in the ring, but I know that Deontay is going to be the one who shows everybody that he’s the best. I already believe he is, but he’ll prove it once again on Saturday night.”