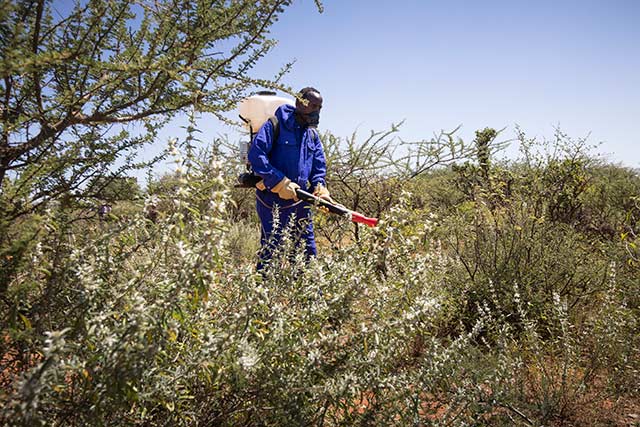 The worst desert locust crisis in 25 years is underway in Ethiopia, where around 90 000 ha of cropland and pasture are already reported to have been infested. As more than 80 percent of people in Ethiopia rely on agriculture and pastoralism for food and income, the pest poses an unprecedented threat to food security, nutrition and livelihoods.

Capable of completely stripping an area’s vegetation, the desert locust is considered the most destructive migratory pest in the world. Even a very small 1 km2 swarm can eat the same amount of food in one day as about 35 000 people. A typical swarm can be made up of 150 million locusts per square kilometre and can travel up to 150 km on the wind in one day.

To combat the pest, the Food and Agriculture Organization of the United Nations (FAO) is supporting desert locust control across the region. With a contribution from the Kingdom of Belgium through the Special Fund for Emergency and Rehabilitation (SFERA), FAO is implementing a project to complement and strengthen the Government of Ethiopia’s control and surveillance operations by providing equipment and support to ground control teams, facilitated by the Desert Locust Control Organization for Eastern Africa – a key partner in the region. FAO will also support field evaluation of bio-pesticides in affected areas, as these pose fewer risks than conventional chemical pesticides.

The desert locust upsurge is the latest shock to livelihoods in the country. As agriculture in Ethiopia is largely dependent on rainfed systems, the increasing frequency and magnitude of climatic extremes and plant pests over the years have left many farming and herding communities particularly vulnerable to food insecurity. Consecutive seasons of poor rainfall in southern and southeastern pastoral areas have severely limited feed and water availability, leading to significant livestock losses that have contributed to rising food insecurity and malnutrition rates.

Swarms are still on the move and a new generation of breeding is expected. If concerted control efforts are not undertaken now to minimize desert locust populations, the conducive breeding conditions expected to continue until June 2020 could lead to 400 times more locusts. Through this project FAO aims to mitigate both short- and longer-term desert locust impacts on the food security, nutrition and livelihoods of farmers, agropastoralists and pastoralists in affected areas.