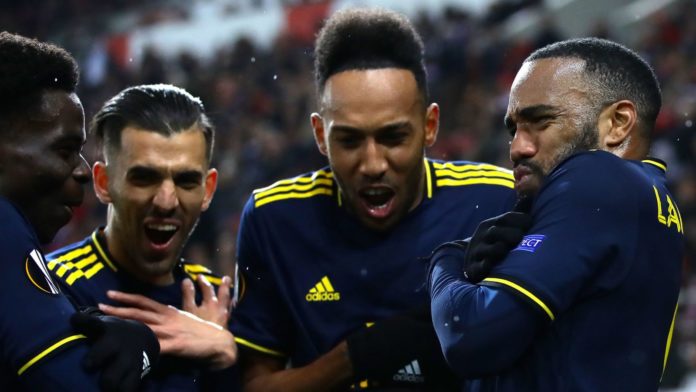 From Bukayo Saka’s man-of-the-match performance for Arsenal to Spurs and Liverpool’s Champions League struggles, we round up the talking points from the midweek European action

It is a testament to just how important Bukayo Saka has become to Arsenal that Mikel Arteta resisted the urge to rotate him against Olympiakos. The Gunners head coach could have picked Sead Kolasinac, but the 18-year-old kept his place and more than justified his inclusion.

Fresh from his superb assist for Nicolas Pepe in Sunday’s 4-0 win over Newcastle, Saka set up Arsenal’s winner at the Karaiskakis Stadium, bursting into the Olympiakos box to latch onto Pierre-Emerick Aubameyang’s pass and cut the ball back for Alexandre Lacazette to finish.

It was Saka’s fifth assist in the Europa League this season and his ninth in all competitions. It is more than any other Arsenal player and his attacking threat wasn’t all the academy graduate offered on Wednesday night.

He impressed defensively too, showing no fear despite the hostile atmosphere and making several important blocks and interceptions before launching Arsenal forward on the break. And so his stunning rise continues. Expect him to keep his place in the side against Everton on Super Sunday.
Nick Wright

Gerrard rolls back the years as Rangers stun Braga

Steven Gerrard has had his fair share of special European nights. Olympiakos 2004. Istanbul 2005. Chelsea 2007. Add Braga 2020 to the list. This was the stuff of fairytale from his side to claw their way to victory from looking dead and buried, two away goals down to Braga with less than half an hour left at Ibrox.

The ex-Liverpool skipper has questioned his team’s character in recent weeks, as they dropped all-but out of the race for the Scottish Premiership title. They showed steel perhaps even he never realised they had to score three goals in 15 minutes and somehow clutch victory from what looked a certain defeat.

There can be little doubt the quality Rangers have unearthed in the loan signing of Ianis Hagi, who took the headlines on his European debut for the club with a sensational double including the 82nd-minute winner.

Whether Rangers’ narrow win proves enough next Wednesday in Portugal remains to be seen, but Gerrard’s side have again shown their potential – and given themselves a great chance of having more chances to showcase it this season.
Ron Walker

Lingard fails to take his chance in Bruges

Ole Gunnar Solskjaer said this week that midfielder Paul Pogba is “nowhere near” a return to first-team action, but it was another member of the Manchester United midfield who was thrust back into the spotlight in Bruges.

England midfielder Jesse Lingard returned to Solskjaer’s starting line-up to make his 200th appearance in a United shirt as they claimed a 1-1 draw at Club Brugge – but it was another disappointing night for the 27-year-old.

Lingard failed to even make the substitutes’ bench for Monday’s 2-0 Premier League win at Chelsea. Having fallen down the pecking order at Old Trafford, this was his opportunity to kick-start his season, and perhaps make a dart for Gareth Southgate’s England squad ahead of Euro 2020.

With Bruno Fernandes having more of an impact as a late substitute, Scott McTominay closing in on a return to fitness and Fred now an established first-choice midfielder, however, Lingard faces an uphill task to break back into favour, even in the continued absence of Pogba.
Ben Grounds

Diogo Jota stole the headlines with his second hat-trick of the season in the Europa League and Ruben Neves scored the goal of the evening with his stunning volley. But Wolves’ 4-0 win over Espanyol at Molineux was a third consecutive clean sheet for Nuno Espirito Santo’s side and that owes much to the return to fitness of key defender Willy Boly.

The French centre-back missed much of the winter because of an ankle injury and Wolves battled on manfully in his absence but his presence at the back turns the team into a different proposition. Nuno’s side kept only one clean sheet in 15 Premier League games without him before shutting out Manchester United and Leicester on his return.

Their previous run of three back-to-back clean sheets came in October – just prior to Boly’s injury. A strong defence is even more important in two-legged knockout competition and if he can remain fit for the rest of the season it should give Wolves plenty of confidence that they can really achieve something special in the Europa – as well as the Premier – League.
Adam Bate

For all the hand-wringing about VAR, the technology performed admirably on its Europa League debut.

It might not have been deliberate, but Ryan Christie did handball inside the box from a corner – his arm outside the silhouette of his body – and the referee took prompt and decisive action, looking at the pitchside monitor and correctly awarding the penalty.

This was how VAR was intended to work, and Premier League referees should take note.

Stale Solbakken’s half-time team-talk was perhaps the second-biggest success, turning around a listless Copenhagen performance after a first 45 which could easily have seen an Odsonne Edouard hat-trick inside 15 minutes.

After the break they nabbed a deserved equaliser through 34-year-old Dame N’Doye – remember him, Hull and Sunderland fans? – and could and should have wrapped the game up from the spot via Jens Stage before Fraser Forster’s fingertip intervention.

Overall though, Neil Lennon will be happy – an away goal, a decent battling draw and plenty of chances created. They’ll need to take them better at Celtic Park next Thursday though…
Max Mathews

Problems piling up for Mourinho

Tottenham have work to do to reach the quarter-finals of the Champions League after going down 1-0 at home to RB Leipzig on Wednesday night in the first leg of their last-16 tie. Spurs were second best for much of the contest and could have been trailing by more goals before a late rally nearly earned an equaliser when Giovani Lo Celso hit the woodwork.

But for Jose Mourinho, it feels like Spurs’ problems are mounting up. The manager was downbeat on Heung-Min Son’s potentially season-ending arm fracture and after defeat to Leipzig he bemoaned his lack of attacking options, the fact Erik Lamela and Tanguy Ndombele were just coming back from lay-offs and the quick turnaround time they have before facing Chelsea in the Premier League on Saturday lunchtime.

As well as Chelsea, there is another key top-four race fixture with Wolves, an FA Cup fifth-round tie with Norwich and a tricky Premier League trip to Burnley before the second leg with Leipzig on March 10.

It’s a decisive couple of weeks for Tottenham’s season – and Mourinho knows it.
Peter Smith

Hope in defeat for Liverpool?

“It’s half time, we are 1-0 down,” said Klopp after just their third defeat of the season. Not only is it half-time, but Liverpool will have the advantage of a home crowd in three weeks’ time.

On Tuesday, the atmosphere did nothing for them. Diego Simeone darted up and down the touchline like a young full-back, conducting the crowd and his players to one of those masterful defensive performances on a deafening evening at the Wanda Metropolitano. No wonder they make the technical area so big…

But unlike Liverpool’s other two defeats this season, all is not necessarily lost, and Klopp can take encouragement from Tuesday night’s showing.

Yes, they neglected to register a shot on target, but Liverpool were completely dominant on the ball, and more importantly, moved the ball quickly in dangerous areas.

Atletico Madrid did allow for gaps to appear, but Liverpool’s final pass was routinely missing. Correct that, and add the cauldron of Anfield to the mix, and the champions will feel confident of turning this around.

They may need one of those infamous blitzes, however, with the away goal now only up for grabs for the Spanish side.
Gerard Brand

It was another record-breaking night for Erling Haaland as his double secured Borussia Dortmund a 2-1 victory against Paris Saint-Germain on Tuesday evening.

The goals took his tally to 10 in seven Champions League games and he has now scored 11 times since joining Dortmund in January from RB Salzburg.

And the records continue to tumble for the 19-year-old.

He now has the most goals of any player for a club within the top five European leagues (all competitions) since his Dortmund debut in January. He is also the first Dortmund player ever to score on his debut in the Bundesliga, DFB-Pokal and the Champions League.

The Norwegian, who has scored 39 club goals so far this season, is only the second player to score 10 Champions League goals as a teenager, after Kylian Mbappe (13), and the first to do so in a single campaign in the competition. And he has more goals in the competition than Atletico Madrid (9) and Barcelona (9).

His stock continues to rise even higher!
Oliver Yew

Pride and passion – When Will and Ben ran with the Bisons