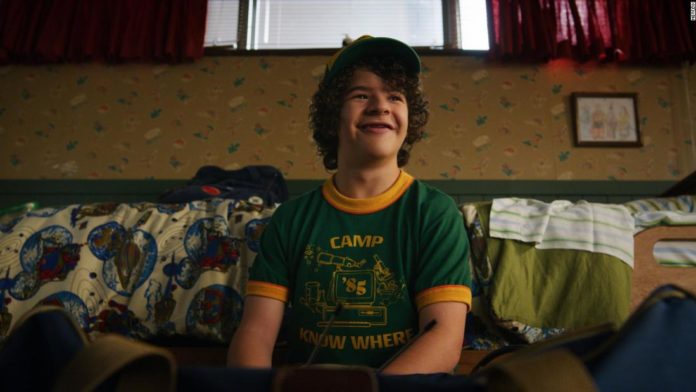 Gaten Matarazzo III, who plays Dustin on the Netflix megahit, was born with cleidocranial dysplasia, or CCD, a rare disorder which primarily affects growth of teeth and collarbones.
Like many celebrities, Matarazzo is using his new fame to bring attention to the condition. It’s been written into the plotline of “Stranger Things” in every season — Dustin even gets dentures in season two — and Matarazzo has made numerous appearances to discuss his life with CCD (and take out his dentures as well).
The attention appears to be working to build public awareness. According to a new study published Thursday in the journal JAMA, each season of the show brought an unexpected increase in weekly Google search traffic for CCD, well above typical levels.
In fact, one CCD-related information page got 10,000 visits the week after the third season premiere of “Stranger Things” last summer.

Cleidocranial dysplasia is an inherited condition which causes a malfunction of the RUNX2 gene responsible for triggering development and maintenance of teeth, bones and cartilage.
People with the condition typically have underdeveloped or absent collarbones, which can cause their shoulders to narrow and slope into the body.
Dental abnormalities are very common. Delayed loss of baby teeth, delayed arrival of adult teeth, misalignment of the teeth and jaws, and extra teeth are typical.
Cecile Feldman, dean of the Rutgers School of Dental Medicine, said Matarazzo told her of his struggles growing up with the condition. She said he told her he had extra teeth, called supernumerary teeth, and “had a lot of trouble finding someone who could take his case. [He’s] had a number of surgeries to remove the supernumerary teeth.”
Matarazzo exhibits some of the other typical features of the condition: a prominent forehead; wide-set eyes; a flat nose; and missing adult teeth.
His toothless grin was a prominent part of the first episode of season one, in which Dustin explains his lisp and lack of teeth to taunting bullies at school:
“I told you a million times, my teeth are coming in. It’s called cleidocranial dysplasia,” Dustin tells the bullies, who have labeled him “toothless.”
But in real life, Matarazzo’s teeth have not come in.
In season two, Dustin proudly displays new dentures, but loses them again in season three because his new girlfriend Suzie believes “kissing without teeth is way better.”
What will season four do to bring attention to a rare disorder? We’ll just have to wait and watch.

Phillip Schofield: ‘My head’s just as muddy as it was before I came out’

‘I was terrified’: Homeland actor recalls being sectioned and ‘sat on’ by six policemen

Chris Pratt can go from the famous Chrises, according to Twitter