Home Culture Joaquin Phoenix rescued a calf and its mother 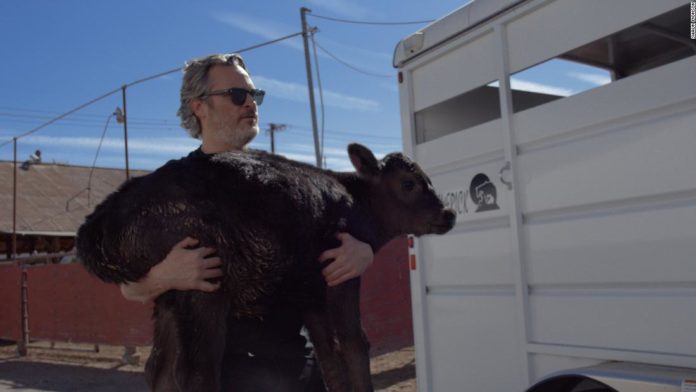 The recent Oscar winner and champion of animal rights accompanied Los Angeles Animal Save, a nonprofit that holds peaceful vigils at local slaughterhouses, to rescue a calf and its mother from certain death.
It all went down two days after his Academy Award win, where he called on his fellow humans to quit drinking cow’s milk in his acceptance speech.
On this, his fifth outing with the group, Phoenix targeted a cow named Liberty, who’d given birth in her holding area to a calf called Indigo.
Phoenix said he met the owner of the beef packer and “opened his heart” to him. The owner ultimately agreed to let the actor and the rescue team leave with both Liberty and Indigo in tow. “I never thought I’d find friendship in a slaughterhouse,” the star said in a statement.
Phoenix, his Oscar-nominated fiancée, Rooney Mara, and the rest of the rescue squad carted the mother and calf over to Farm Sanctuary in north Los Angeles County.
“My hope is, as we watch baby Indigo grow up with her mom Liberty at Farm Sanctuary, that we’ll always remember that friendship can emerge in the most unexpected places,” Phoenix, a lifelong vegan, said. “And no matter our differences, kindness and compassion should rule everything around us.”
If you’ve tuned out Phoenix’s many acceptance speeches this year, his rescue keeps with the environmental messages he’s espoused all season.
Earlier this awards season, he joined Los Angeles Animal Save to comfort pigs on their way to the slaughterhouse. He’d arrived just in time to see them off, still wearing the tuxedo he’d donned to the Screen Actors Guild Awards that day.