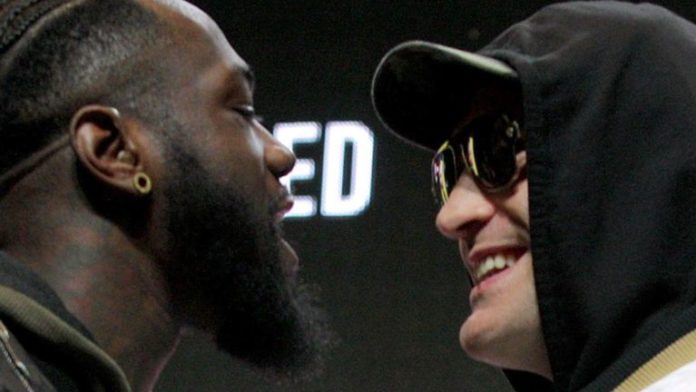 “People have more choices now so the barometers have risen of what you have to present. It must be compelling.”

Tyson Fury’s US promoters Top Rank want to “strike while the iron is hot” and set up a mega-fight with Anthony Joshua this year, the company’s president has told Sky Sports.

Fury will challenge Deontay Wilder for the WBC heavyweight championship in a rematch on Saturday night and although a third fight is pencilled in, Joshua could ruin those plans by fighting the winner before 2020 is out.

Top Rank president Todd DuBoef, asked if they were committed to agreeing an undisputed heavyweight title fight, told Sky Sports: “Of course. There is nothing stopping it. In today’s world, we know that demand or massive interest is unparalleled.

“I’ve been in the business for 25 years. Sometimes there is interest in a fighter but not necessarily in a match.

“People have more choices now so the barometers have risen of what you have to present. It must be compelling.

“One plus one equals 10, in this fight [between Wilder and Fury]. It isn’t Wilder against Luis Ortiz or Dominic Breazeale, or Fury against Tom Schwarz or Otto Wallin, right? The needle didn’t move as significantly as this week. And that should be our objective – to move towards [fights that capture mainstream interest].”

Asked when Fury and Joshua could realistically meet inside the ring, DuBoef said: “While we have momentum now, I’d love to see the fight later this year. Strike while the iron is hot.

“Fury has a really tough match in Wilder but, I believe, this is when you make matches.

Joshua’s promoter Eddie Hearn had previously told Sky Sports that an undisputed heavyweight title fight could be staged in Saudi Arabia. He said: “We have a huge site offer in place for that fight to take place.”

DuBoef added that the fight would have huge appeal in the US and UK: “It’s a fight that crosses over beautifully to both. Since Fury joined our ship he has become a star in the US, and he garners a lot of attention. Joshua’s interest is UK driven just because he hasn’t pushed his flag into the US as much as Fury. But the world heavyweight champion works wherever.”

Joshua is first expected to defend his IBF, WBA and WBO titles in June in London against Kubrat Pulev, who is also promoted by Top Rank.

“A lot of things could roll the right way,” DuBoef said.

DuBoef explained why Top Rank joined forces with Fury in 2019 before promoting his most recent two fights in Vegas: “It was the story of Tyson that hadn’t been exposed to the US. He has self-deprecation and he is real in the way that he talks about himself. He is one of the most connectable athletes in the world.

“I didn’t know the full story of what he’s been through. I thought: ‘We have to unlock this’. Our job is to open the world’s eyes to a wonderful sport of wonderful characters.

“During the Larry Holmes and Wladimir Klitschko eras, they didn’t move the needle. It’s really about creating interest and introducing the athletes to the biggest base.”

He added about the build-up to Saturday’s fight with Wilder: “This is a big week for the sport. It’s just the beginning of the heavyweight renaissance which is driving the global interest in boxing. It is a massive week for media, and the business of relationships.”

The Final Word: Bucs are for real, Cowboys a hot mess

Hunter out of England’s Six Nations game against Italy

Recording Brain Activity Through the Mouth