Home Lifestyle No One Wears a Sweater Better than Tyler, the Creator 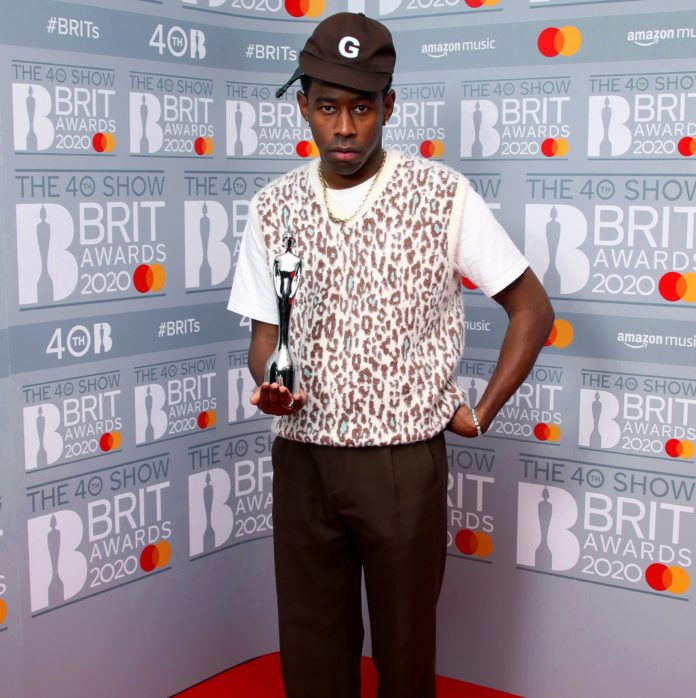 Tyler, the Creator is the toast of the town right now. Igor, his genre-bending fifth studio release, won big at the Grammys a few weeks ago, taking home the award for Best Rap Album, and the Odd Future frontman and inimitable internet presence has been rightfully racking up accolades ever since. It’s been a banner year for Young T in so many ways, perhaps in no department more so than his personal style. Tyler’s always been a well-dressed, and wildly influential, dude: He was instrumental in putting Supreme on the map and helped popularize the relaxed take on skate rat style that’s still pervasive on the streets of downtown NYC and other cultural capitals around the world. Over the last few years, Tyler’s style has evolved with his sound—he’s emerged as one of the most idiosyncratic dressers around largely due to an elegant take on updated prep, which he filters through the lens of his longstanding passion for the wackier elements of skate culture (case in point: Golf Wang, his own increasingly comprehensive clothing collection).

Put more simply, the man gets off massive fits, and these days, he’s been rocking one type of piece more than any other: the sweater. Tyler’s made sweaters a crucial component of his nerd chic persona, and in turn has lent the style a kind of, sort of, (dare we say it) sexiness. Don’t believe me? Scroll through for all the spring style inspiration you’ll need this season.

At the Brit Awards earlier this week, Tyler took home top honors for an International Male Solo Artist in one of the best fits of the night (and that’s saying something).

The best thing about T’s style is that he looks so comfortable with himself, perhaps because he tends to stick with a few pieces he knows always work: the cool-as-hell headwear, the subtle accessories, the clean white tee, the perfectly cropped trousers, all anchored by a chunky shoe (often Paraboot’s “Michael” style).

Another event, another award, another standout sweater. This time Young T scooped the Kodak Maverick Award in a pastel pink cardigan from Lacoste.

At the Gucci show in Milan last month, Tyler did what he does best: showed up in a fucking fire logo cardigan, aka his own pared-down take on the Italian fashion house’s splashy maximalist style.

When Tyler rocks a sweater that isn’t the fit’s showstopper it’s always, at the very least, a crucial supporting cast member. Case in point: the perfectly cropped grey V-neck he layered under his varsity jacket here.

Tyler’s ability to effortlessly imbue formerly stuffy prep staples (like this classic cricket sweater) with his ineffable sense of cool is unparalleled.

His take on the tried-and-true corporate workhorse that is the grey flannel suit is boxy and cropped up top, baggy on the bottom, and left decidedly unbuttoned, to better emphasize the thick V-neck he layered underneath.

None of this should work. On Tyler, it very much does. ‘Nuff said.

A prime example of Tyler’s commitment to the sweater game: Even when it’s too hot out to comfortably rock one the way you and I might, there’s nothing stopping him from wearing his as a layering piece. You’d be cheesing too if you had a cardigan that fucking fuzzy draped over your shoulders.

Tyler (with the sandals and the socks!) and a fan.

We could all learn a thing or two from Tyler’s wholehearted embrace of every color ever. The man can’t miss.

This right here is a “don’t try this at home” level swerve, and Tyler pulls it off with aplomb (in a bright pink knit top, naturally). Did you really expect anything less?