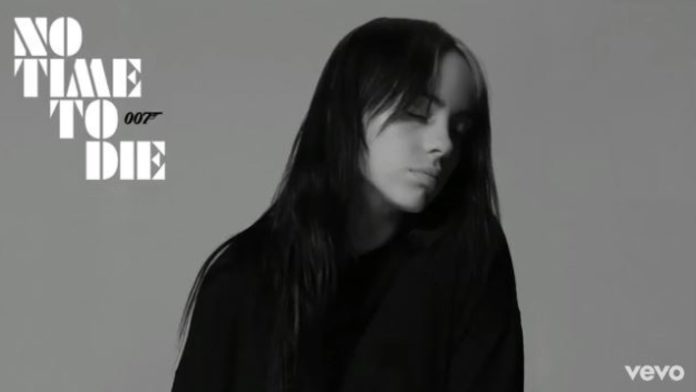 Billie Eilish has topped the charts with her James Bond theme track, breaking the modern-day record for the highest 007 single opening week sales of all time.

No Time To Die, the song for the film of the same name and the teenager’s first UK number one single, has racked up 90,000 chart sales and 10.6 million streams in its first week of release.

At 18, Eilish is the youngest artist and first woman to score a number one with their 007 theme.

The Official Charts Company says her opening week chart sales are understood to be the biggest for a Bond theme of all time, based on its available records.

In modern times, Adele’s Skyfall managed 84,000 chart sales in its opening week in October 2012, while Sam Smith’s The Writing’s On The Wall, for follow-up Spectre, achieved 70,000.

Co-written by Eilish and her brother, Finneas O’Connell, as well as Hans Zimmer and Johnny Marr, No Time To Die is only the second 007 theme to top the UK charts in the entire history of the 57-year-old film franchise – after Smith, in 2015.

The number one rounds off a successful week for the singer-songwriter, who debuted the song live at the Brit Awards, where she also won the prize for best international female.

She was also the big winner at the Grammys, where she picked up all four of the major awards of the night – best newcomer, album of the year, record of the year and song of the year.

When she announced that she would be recording the James Bond track earlier this year, Eilish said it felt “crazy to be a part of this in every way”.

She continued: “To be able to score the theme song to a film that is part of such a legendary series is a huge honour.

“James Bond is the coolest film franchise ever to exist. I’m still in shock.”

Smith was 23 when he sang Writing’s on the Wall, for which he won a Golden Globe and an Oscar.

Adele, who was 24 when she recorded Skyfall, also won several awards, including an Oscar, a Brit, a Grammy and a Golden Globe.

Eilish’s debut album When We All Fall Asleep, Where Do We Go? topped the UK and US charts when it was released last year, but this is her first UK number one single.

Her biggest hit, Bad Guy, was kept at number two by Lewis Capaldi’s Someone You Loved last year.

No Time To Die, the film, will be released in April, with Daniel Craig returning for what he has said – definitely, this time – will be his last outing as Bond.

Disney CEO explains why it’s safe to go back to Disney...

The case to extradite Huawei’s CFO from Canada to US can...

Fresh air, bright lights and no clutter: What makes a pandemic-friendly...