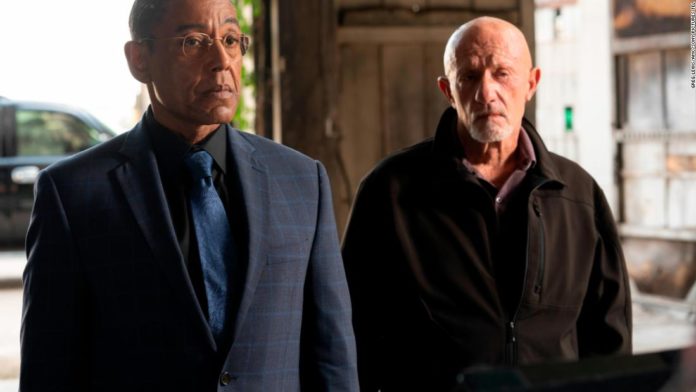 Once again, the premiere opens with a black-and-white flashforward that feels like a mini-masterpiece, and proves even more tense than usual thanks to the announcement that the series’ finish is now in sight.
Back in the past, Jimmy McGill (Bob Odenkirk) has begun using the “Saul Goodman” persona professionally, sliding toward the darkness that seems destined to ruin his relationship with Kim Wexler (Rhea Seehorn), the linchpin of any hope for him, even if we already seem to know the outcome.
It’s all about a “fresh start,” Jimmy/Saul says, but Kim greets his actions with skepticism, while he appears oblivious to her pained expressions as his ethics slink toward the abyss.
As noted, “Saul” has only become richer and better as it nears “Breaking Bad” territory, with the overlapping plots of Mike (Jonathan Banks), Nacho (Michael Mando) and Gus (Giancarlo Esposito) beginning to progress in the same direction. This season also features an appearance by Dean Norris’ character, DEA agent Hank Schrader, providing one more layer of connection to the mother ship.
Perhaps foremost, “Better Call Saul” has cleverly mirrored the moral arc of its predecessor, again dealing with missed opportunities and roads not taken that lead people with admirable qualities down dark paths. While we saw the decay of Walter White’s soul occur gradually, because this is a prequel this show has always been more about filling in the details of Jimmy, Mike and others’ descent.
In puttying in those gaps this series takes its time in a way few others do, and while that was occasionally frustrating at first, by now you can assume the payoff is almost always worthy of the trip. Where else, for example, would an entire pre-credit sequence be built around a discarded ice-cream cone?
AMC will seek to provide “Better Call Saul” an additional boost audience-wise by scheduling its premiere behind “The Walking Dead,” which begins the second half of its 10th season exhibiting many of the pitfalls that “Saul” has avoided. Specifically, “Walking Dead” remains mired in the Whisperers plot, which frankly can’t end soon enough at this point.
“Saul” then settles into its regular slot on Monday. At one point during the four episodes previewed, Nacho speaks of the criminal enterprise in which they’re involved by saying, “When you’re in, you’re in.”
As the movie “El Camino” demonstrated, replicating the alchemy “Breaking Bad” possessed is no small feat. But when you’re good — as “Better Call Saul” is — you’re good, man. Perhaps especially so now that we can finally see the light, or really the opposite of it, at the end of the tunnel.
“The Walking Dead” and “Better Call Saul” return Feb. 23 at 9 and 10 p.m., respectively, on AMC.

Beyond James Bond, Sean Connery was the ultimate movie star

From a jobbing actor to a film icon: The life and career of the ultimate 007

Super Typhoon Goni Churns Toward the Philippines as the Globe’s Strongest...

Should Psychologists Talk About Their Own Mental Health?