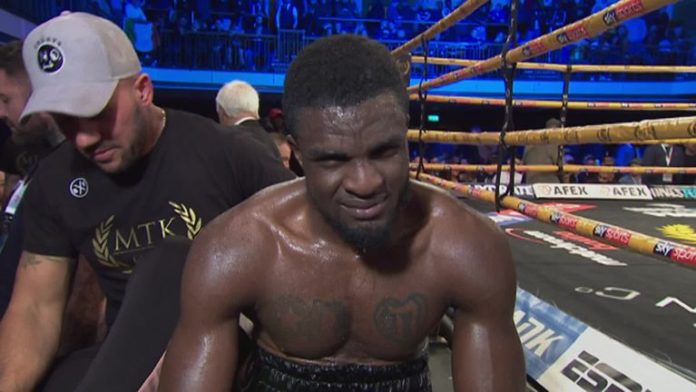 Ohara Davies blasted his way into the final of the Golden Contract super-lightweight final after stopping Jeff Ofori at York Hall on Friday night.

The Hackney fighter, who picked up Ofori in the draw, dropped his fellow Londoner in the second before securing a sixth-round TKO and his second straight stoppage bonus, but injured his hand in the process.

“Jeff was a lot tougher than I thought he would be,” Davies told Sky Sports afterwards. “He was fit and he was in shape and I was shocked.

“I hurt my right hand early in the fight. I think it was round two.

“I’ve got a few months off. I’m going to eat burger and chips.”

Davies was on the front foot using his longer reach to measure the distance with his probing jab but his wild hooks gifted Ofori opportunities to counter.

Ofori backed up his rival in the second, switching stances to get up close and personal, while ‘Two Tanks’ began to find the target with his hooks in the third and was credited with a knockdown just before the bell.

? @OharaDavies secures his place in the Golden Contract super-lightweight final and a KO bonus in the process

A tired Ofori was on the canvas again in the fourth but the referee this time rightly ruled a slip and the Tottenham fighter responded in the fifth by backing Davies up onto the ropes before enjoying success with a couple of decent uppercuts.

Davies appeared to be rocked again at the start of the sixth but the 28-year-old recovered well to land several unanswered heavy rights to force the referee to intervene.

Tyrone McKenna defeated Mohamed Mimoune in a hotly-contested unanimous decision to set-up a showdown with Davies.

The Belfast boxer danced around Mimoune in the opener, firing off a wide variety of shots from all angles, forcing the Frenchman to cover up behind a high guard.

Mimoune’s defence was still holding tight in the second and the 32-year-old started to find the target when getting up close with both men taking turns to swap combinations.

‘The Problem’ began to live up to his name in a breathless third, backing up his taller rival and in the fourth he twice forced McKenna on to the ropes before unloading with both hands.

McKenna used his longer range to hit and move to claim the fifth and employed the same tactics to keep Mimoune at bay in the sixth.

However, Mimoune landed a succession of hooks upstairs at the start of the seventh to draw blood from above the right eye of McKenna.

McKenna bravely battled back in the ninth after soaking up the shots in the eighth and the pair were still trading leather to the delight of a sold-out crowd when the final bell sounded at the end of the 10th.

AJ: Does Wilder have a master plan?