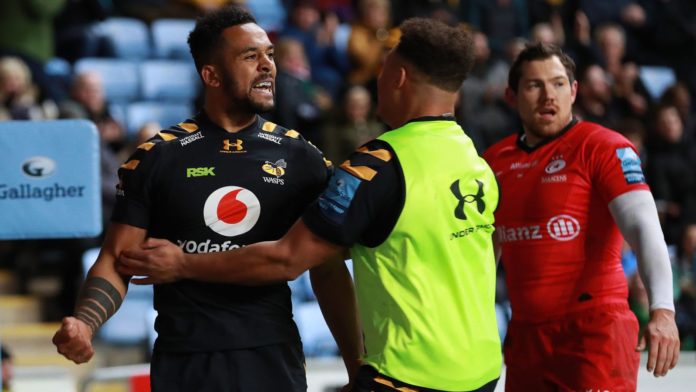 The hosts played some delightful rugby at the Ricoh Arena to run in eight tries against the English and European champions, who have been deducted 105 points to ensure they finish bottom after repeated breaches of the salary cap.

Ali Crossdale and Alex Lewington responded with tries for Saracens.

Wasps suffered a blow before kick-off when prop Kieran Brookes and flanker Thomas Young were forced to withdraw through injury.

They quickly overcame the setback to take an early lead when Gopperth kicked a straightforward penalty.

Saracens, who lost wing Rotimi Segun to an injury in the warm-up, soon fell further behind when Willis forced his way over from close range after Wasps had been gifted an attacking position by the visitors conceding a couple of needless penalties.

Worse was to follow for Saracens when, from inside his own half, Jacob Umaga cleverly kicked ahead and collected to put the opposition defence on the back foot before Willis and Umaga made crucial contributions to send Carr over.

A brilliant 45-metre run from Malakai Fekitoa took his side deep into the visitors’ 22 and, although the centre’s pass did not go to hand, he regathered possession to feed Tommy Taylor, who showed splendid awareness to provide Kibirige with an easy run-in.

A miserable first half for Saracens continued when Brad Barritt failed to collect a hospital pass and was hurt in the collision. The Saracens skipper remained on the floor as Kibirige scooped up the ball to easily outpace the cover on a 55-metre run to the line.

Barritt left the field to be replaced by Dom Morris but with the last play of the half, some skilful ball handling saw Saracens get on the scoreboard with a try from Crossdale.

After the interval, Lewington was shown a yellow card for a deliberate knock-on, allowing Gopperth to extend Wasps’ lead to 34-5.

In the wing’s absence, Wasps scored their fifth try when a well-judged cross-field kick from Umaga bounced favourably for Shields to score.

Umaga then turned try-scorer as he supported an elusive run from Kibirige to go over under the posts.

Wasps took off two of their leading lights in Dan Robson and Willis but the rout continued with a second try for Shields.

With 15 minutes remaining Saracens picked up a second try when Alex Goode’s pass sent Lewington over but Wasps had the final say when Oghre finished off a lineout drive.

AJ: Usyk is smart, but I’m here to hurt

I Want to Live in Entireworld’s Fisherman Sweater Until Spring Arrives...

Bodies of a woman and two children found at a house...