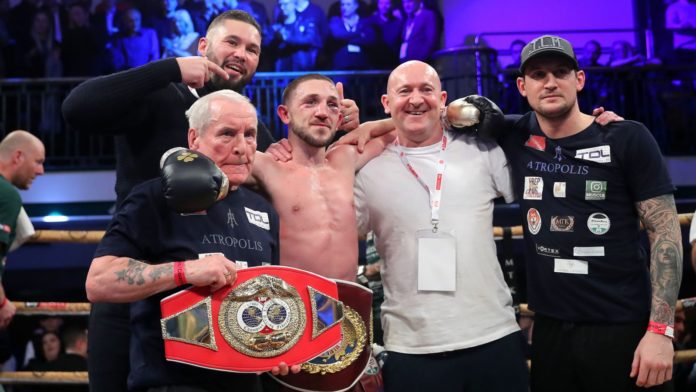 Jazza Dickens defeated Leigh Wood in a majority decision to secure a showdown will Ryan Walsh in the Golden Contract featherweight final.

The Liverpudlian claimed a hard-fought victory with scores of 95-95, 96-94, 95-94 after a sensational semi-final and won the WBO European title in the process at York Hall on Friday night.

DICKENS GETS THE DECISION! @JazzaDickens10 beats @itsLeighWood on points and progresses to the final where he will meet @Walsh7Ryan pic.twitter.com/NeFOgSsqAh

Dickens started aggressively and had Wood on the floor in the opener but the referee ruled it as a slip.

The reigning IBF European champion continued to fight on the front foot in the next two rounds, switching his attack from the head to the body, while Wood threw a variety of shots from every angle in the fourth a bid to penetrate his rival’s tight defence.

Wood found a way through the 28-year-old’s high guard to land a long right at the start of the fifth and later tested the former world title challenger’s chin with a heavy lead right hand.

The Nottingham boxer continued his good work in the sixth before Dickens responded by landing a crunching body shot to halt his charge.

Dickens, with his left eye swollen, appeared to have a tiring Wood in trouble in the seventh, but the 31-year-old dug deep and finished the round swinging with a smile on his face.

‘Leigh-thal’ wobbled the relentless Dickens in the eighth and sent him to the ropes, drawing blood in the process before switching his attack to the body.

Wood went head hunting in vain at the start of the ninth but Dickens found a grandstand finish to the round and had Wood out on his feet after catching him with a huge left and following up with barrage of blows.

The crowd were on their feet for the final round as both fighters threw everything in a bid to secure a stoppage with Woods coming close before the bell sounded.

“Full respect to him. I tip my hat to him,” said Walsh on Sky Sports afterwards. “I’m buzzing, I’m into the final.

“I think a tall orthodox sounds good to me. Stylistically, Leigh Wood is better for me.”

Walsh took the centre of the ring and McCullagh circled on his toes in a cagey opener which saw neither man land any meaningful punches.

McCullagh continued to dance around in the second, darting in and out of range to land quick one-twos, while Walsh attempted to target the body in the third in a bid to slow down his rival.

After failing to catch the elusive Northern Ireland fighter in the fourth a frustrated Walsh manhandled McCullagh to the canvas in the fifth before being caught by a left-right combo.

How are you scoring this?

Walsh managed to pin down McCullagh in the sixth, sending him to the canvas with a heavy hook and then had the Derry man unsteadily backpedalling just before the bell.

McCullagh claimed the seventh round but was soon cornered by the Cromer fighter in the next and a huge right hook sent the southpaw staggering backwards into the corner post.

Walsh, growing in confidence, stalked his McCullagh with his guard down in the penultimate round and dropped him for a second time in the fight.

McCullagh landed a one-two at the start of the 10th but the reigning British featherweight champion replied with the heavier shots and rightly hand his hands raised in victory.