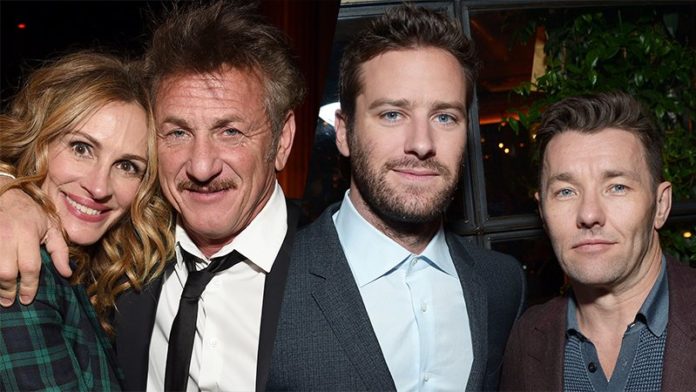 Oscar winners Julia Roberts (Erin Brockovich, August: Osage County) and Sean Penn (Milk, Mystic River), along with Golden Globe nominees Armie Hammer (Call Me by Your Name), and Joel Edgerton (Loving), have been cast in the series Gaslit, described as a modern take on the Watergate scandal from UCP, according to Variety. Mr. Robot creator Sam Esmail will executive produce the project, which is based on the Slate podcast “Slow Burn.”

Gaslit focuses on the untold stories and forgotten characters of Watergate, from Nixon’s bumbling, opportunistic subordinates, to the deranged zealots aiding and abetting their crimes, to the tragic whistleblowers who would eventually bring the whole rotten enterprise crashing down.

Roberts will star as Martha Mitchell, a big personality with an even bigger mouth, who is a celebrity Arkansan socialite and wife to Nixon’s loyal Attorney General, John Mitchell, played by Penn. Despite her party affiliation, she’s the first person to publicly sound the alarm on Nixon’s involvement in Watergate, causing both the Presidency and her personal life to unravel. Penn’s Mitchell is described as temperamental, foulmouthed and ruthless – yet hopelessly in love with his famously outspoken wife. He’ll be forced to choose between Martha and the President.

Hammer will play the part of John Dean. A hotshot upstart, Dean is the young White House Counsel torn between his ambition and his struggle with whether he can lie to protect the President. Edgerton will take on the role of G. Gordon Liddy. A Korean War veteran and former FBI agent, Liddy is chief operative of Nixon’s “Plumbers” unit, tasked with plugging embarrassing leaks in the wake of the Pentagon Papers.

RELATED: Production Begins on Kenneth Branagh’s Death on the Nile

Anonymous Content and Slate’s Gabriel Roth and Josh Levin will also serve as executive producers. “Slow Burn” creator Leon Nayfakh will consult on the series. UCP will shop the project around to premium and streaming platforms.