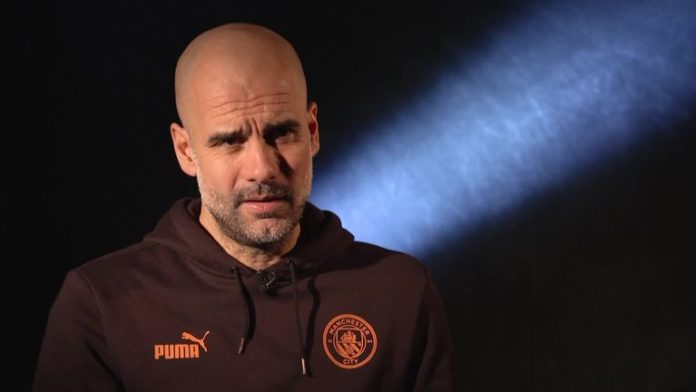 Watch Leicester vs Manchester City on Saturday from 5pm on Sky Sports Premier League; Kick-off is at 5.30pm.

Pep Guardiola fears the impact of Manchester City’s proposed Champions League ban as well as the spiralling costs for players will hinder his summer transfer plans.

John Stones, Leroy Sane Ilkay Gundogan and Claudio Bravo were among 13 arrivals at the Etihad Stadium when Guardiola took over as the club’s manager in the summer of 2016.

But the transfer landscape is different now for City with the club suspended from European competition by UEFA for two years as a result of alleged Financial Fair Play rule breaches.

The club’s chief executive Ferran Soriano says the allegations “are simply not true”, with City planning to appeal the ruling to the Court of Arbitration for Sport.

Asked by Sky Sports News whether he expects this summer to be as busy on the transfer front as his first summer at City, Guardiola said: “I don’t think so. I don’t think so because today it is so difficult to change the players because they are so expensive and it is not easy.

“The club must [also] be sustainable, I understand completely and in the situation that we are in we have to wait [not] anticipate. Our idea right now with the situation with Financial Fair Play [is] when we are going to appeal.

“I think the club is working as though nothing has changed, nothing has happened and the players have to play like they have done all of these seasons [under me] in the same way,” Guardiola added.

Asked if he is still planning for Champions League, the City boss said: “Yeah absolutely. We believe we are going to be there.

“What we have to do is to do our job and play like we have done these seasons and then after that [we will see].”

Guardiola, meanwhile, has not ruled out signing a new long-term contract at City.

The 49-year-old insisted earlier in the week he would stay and “fight” for the club even if their two-year ban from European football is upheld.

Guardiola said he expected to talk with City chairman Khaldoon Al Mubarak about his future “at the end of the season, or in the middle of next season, and we will see”.

“Everyone is looking for that, to be happy with what they do.

“I’m working with exceptional players especially and I have the feeling that they follow us 100 per cent. Knowing how it’s not easy working with us and with me, but I’m happy.

“When I feel that, but I feel I am with a club, we have got incredible owners and a good relationship, so I think it will not be a problem, to understand both ideas, if we decide to stay three more years or stay in the time we are together.

“With Khaldoon we are going to talk at the end of the season, or in the middle of next season, and we will see.”

Rodgers’ Leicester ‘have been incredible’

City hold a four-point lead over third-placed Leicester and can strengthen their hold on second spot in the table with victory at the King Power Stadium in Saturday’s early evening kick-off, live on Sky Sports Premier League and Main Event.

Guardiola admitted during his Friday news conference that he has been hugely impressed by the job done by Brendan Rodgers since taking over from Claude Puel as Leicester boss in February, 2019.

“I know the incredible job he did at Liverpool but I was not here [at Man City],” Guardiola said. “I saw his team at Celtic and I said ‘wow, this team plays good and aggressive and has good vibes’.

“Leicester have been incredible all season. They have an incredible organisation with good scouting. They know exactly what they have to do and it is nice to see teams play as well as they play.