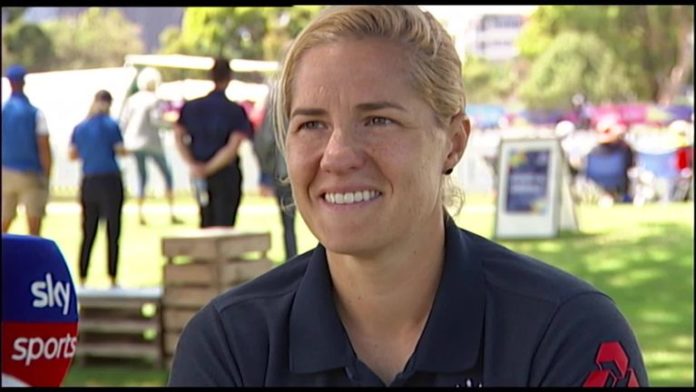 Watch England vs South Africa at ICC Women’s T20 World Cup live on Sky Sports Cricket from 10.30am on Sunday

Katherine Brunt says she feels “like a teenager” as she prepares for England’s opening game of the Women’s T20 World Cup against South Africa on Sunday.

A fresh-faced, 23-year-old Brunt was England’s match-winner – taking 3-6 in four overs – as they beat New Zealand in the 2009 final to claim the inaugural T20 World Cup.

England have finished as runners-up on three occasions in the five tournaments since, with the now 34-year-old forced to miss their last appearance back in 2018 due to injury.

Brunt, speaking ahead of England’s opening game against South Africa in Perth – live on Sky Sports Cricket from 10.30am on Sunday – says, at one time, she didn’t think she’d ever get back to this level again.

“At one stage, I didn’t think there would be a comeback from that, but the body is a funny thing and right now I feel like a teenager, running in, playing every game, working hard in the nets, not wanting to rest.

“Touch wood, things have been really great for me and hopefully I can stay with this feeling throughout the tournament.

“It’s exciting for me. We’re looking forward to getting going now and hopefully starting the tournament with a win.”

While waiting for their first game on Sunday, England have been able to watch the atmosphere build in Australia as the tournament got under way on Friday – the hosts and holders falling to a surprise defeat to India in the opener.

Brunt has been impressed by the coverage the competition has got and thinks Cricket Australia’s stated aim of a record-breaking, sell-out final at the 90,000 capacity MCG – where Katy Perry is set to perform – looks a real possibility.

“You literally can’t get away from it [the tournament],” said Brunt. “You walk down the street and they’ve got these painted murals advertising it. Watching TV on your down time, it’s every other advert.

“You cannot escape it, which is obviously brilliant. The fact we’ve got someone like Katy Perry opening and closing the day on the final – that’s unheard of, and something every team wants to be a part of.

“What Cricket Australia have done to promote this tournament has been fantastic. I can only imagine them reaching that 90,000 target now.

“Before, we all thought, how could that happen? But now it’s becoming quite clear that it actually can. It’s really exciting!

“That’s the goal, to reach the final. You can’t ignore it, because of the hype surrounding what will happen on that day, but you can’t think about it too much – it needs to be somewhere at the back of your mind.”

Brunt’s goal is to reach the final, while the recently-appointed new coach of the England Women’s team, Lisa Keightley, has stated she’s targeting a run to the semi-finals as a minimum goal.

Brunt says the new coach has settled in brilliantly, adding: “Lisa has been brilliant in her transition. It has been absolutely seamless.

“Everybody has connected well with her, as we thought we would. She has been really relaxed – no stress from Lisa at all.

“She is really keen for you to play your own game, play freely and everybody has taken to that really well.”

Watch England’s opening game of the Women’s T20 World Cup against South Africa, live on Sky Sports Cricket from 10.30am on Sunday.