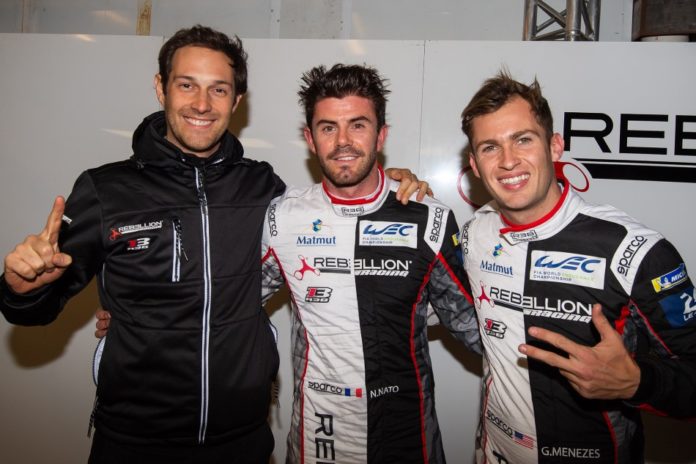 The no1 Rebellion Racing R13-Gibson secured pole position for the 6 Hours of Circuit of The Americas tomorrow with Gustavo Menezes and Norman Nato putting in an average lap time that was 1.6 seconds faster than the two Toyota TS050-Hybrids.

The Rebellion Racing mechanics had to work extremely hard between the second Free Practice session and Qualifying to change the blown engine that had put Bruno Senna into retirement in the earlier session.  The result was an average lap of 1m47.530 from the two drivers, with Nato taking the fastest lap of the session with a 1m47.387.

The LMP session was red flagged with just over 5 minutes left on the clock after the no33 High Class Racing Oreca stopped on track.  The two Toyotas still hadn’t completed their second lap and were forced to put fresh tyres on and go for it when the pitlane opened.  Brendon Hartley in the no8 Toyota ran wide at T19 and had the lap deleted, the Kiwi managing to post a timed lap at the chequered flag on the next lap.  It was the no7 Toyota of Jose Maria Lopez and Mike Conway that secured the front row start alongside the Rebellion for tomorrow’s race.

The LMP2 pole position was secured by the no42 Cool Racing Oreca of Nico Lapierre and Antonin Borga, the Franco-Swiss pairing finishing 4th overall with a time of 1m49.910, just 0.163 ahead if the no22 United Autosports Oreca of Filipe Albuquerque and Phil Hanson.

The LMGTE Pro pole position went to Aston Martin Racing with the no95 Vantage of Nicki Thiim and Marco Sorensen claiming the top spot from the no92 Porsche 911 RSR-19 of reigning champions Kevin Estre and Michael Christensen.

The two Ferraris were 5th and 6th, with the single Corvette in 7th.  The top six cars were covered by less than half a second at the end of qualifying.

Reigning champions Team Project 1 added another pole position in LMGTE AM to their tally with the no56 Porsche of Matteo Cairolli and Egidio Perfetti taking the top spot with an average lap of 2m02.784.  The Porsche was just 0.046s ahead of the no98 Aston Martin Racing Vantage of Paul Dalla Lana and Ross Gunn.