Home Sport Robinson: No gap between NRL and Super League 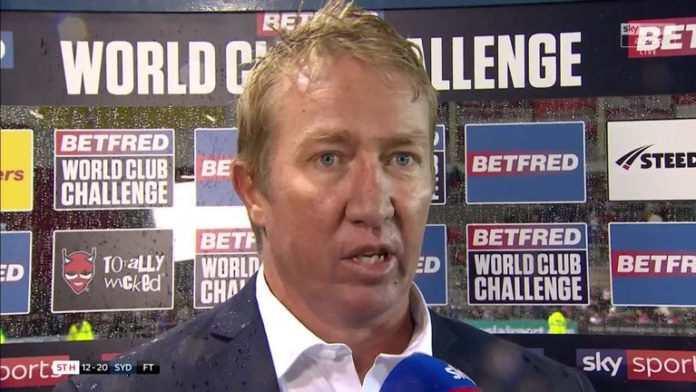 “They (St Helens and Sydney) were the two best teams in rugby league and it was a great game,” says Roosters coach Robinson

Sydney Roosters coach Trent Robinson says his side’s close-fought victory over St Helens in the World Club Challenge shows there is no gap between the NRL and Super League.

The Roosters were pushed all the way in front of a rousing crowd of 16,018 at the Totally Wicked Stadium, where they secured a 20-12 victory to maintain their 100 per cent record in the event.

New Zealand Test centre Joseph Manu scored two tries in a victory that enabled the Sydney club to equal the record of four wins held by Wigan and Melbourne as they became the first team to retain their world crown.

“There is no gap at all, they were the two best teams in rugby league and it was a great game,” said Robinson,

“It was tough and physical. There was a great middle contest there, they all went after each other and the backs decided to move ball a bit and see who could get the execution right.

“I know Saints had a couple of opportunities which they would be disappointed they didn’t take. We nailed the opportunities that we had, that was the crux of it.

“It wasn’t perfect but it’s a great start to 2020. We showed some great signs about who we are.”

England prop Luke Thompson gave St Helens a dream start with a sixth-minute try and winger Tom Makinson had two disallowed either side of half-time before the Roosters showed their class.

But Saints battled to the end and were rewarded with another try from front-rower Alex Walmsley to leave coach Kristian Woolf beaming with pride.

“I’m very proud of the effort,” he said. “We created plenty of opportunities and did a really good job defensively but didn’t quite make the most of our opportunities.

“We had two tries disallowed either side of half-time – both were 50-50 calls – and there were a couple of other opportunities.

“We just had to ice one of those to start to put pressure on the opposition and it looks a different game.

“Our blokes ripped into the best pack in the world. We had some young guys out there and they should take a lot out of the game.

“It was an even contest and it could have gone either way.

“In the end, they win, so they’re still the best team in the world, but I think we beat most teams tonight, that’s for sure.”

The Roosters’ victory continued the recent one-sided nature of the event, with NRL champions winning 10 of the last 12 clashes with their Super League counterparts, but Robinson remains a big advocate of the concept.

“It’s such a privilege to come to this ground and play the World Club Challenge here. Hats off to them.

“You walk out there, the light show is on, the fires going, the south stand is singing, it was what footy is about.

“You want to come here and cross cultures and that’s what we’ve done, what an amazing experience for everyone.

“Now we’ve got to make sure it’s properly organised. I’d like to have three here and one in Australia and it can be done. We don’t have to decide at the end of the year.”

Woolf, who in his first season in Super League, also believes the event is deserving of more support.

“Everyone has commented on the atmosphere and how tough a game it was,” he said.

“It’s something the NRL should get behind as well, it’s deserving of a rightful spot on the rugby league calendar.”