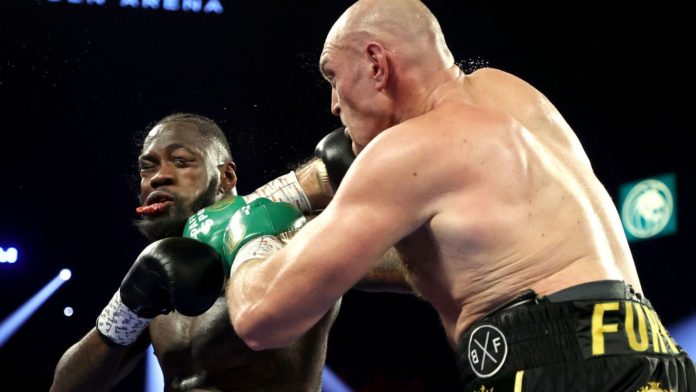 Fury comprehensively outfought the previously undefeated and big-punching Wilder in their Las Vegas rematch to capture the WBC title and make a resounding statement about divisional dominance.

Fury knocked Wilder down twice, completely controlled every moment of their fight, and forced the towel to be thrown in by the champion’s corner during an onslaught.

It was one of the great performances from a British boxer on foreign soil made all the more special after Fury spent nearly three years out of the ring battling mental health issues after his first world title win, when he upset Wladimir Klitschko in late 2015.

Now a two-time world heavyweight champion and undefeated in 31, Fury bullied the man with whom he shared a draw 14 months ago. Wilder had been rated as one of boxing’s hardest-ever punchers last year but Fury out-gunned him.

Fury had raised eyebrows pre-fight by insisting he would knock Wilder out in two rounds and, from the first exchange, he lived up to his promise of being more aggressive. He had employed trainer Sugarhill Steward to replace Ben Davison and, despite only working together for a matter of weeks, their new alliance worked a treat.

He was immediately on the front foot, jabbing and forcing Wilder to retreat. When Wilder threw in hope, Fury blocked his efforts and replied more accurately before holding his fist aloft in celebration with the crowd clearly backing him.

The second round ended with Fury mauling a bewildered Wilder into the corner. The British challenger had landed the better shots and Wilder was already wearing a concerned look.

A clubbing right from Fury sent Wilder crashing to the floor in the third round. The champion returned on wobbly legs and was soon bundled down again – the second occasion did not count as a knock-down but Wilder was bloodied, hurt and discombobulated. Wilder may have been saved by the bell for the end of the third.

Wilder tripped over his own feet in the fourth round after a tangle of legs. He had completely lost composure and balance and his lip, meanwhile, had been busted open.

Fury knocked Wilder to the canvas for a second time with a left hook to the body in the fifth round. Seeking the finish, he had a point deducted for an illegal punch.

Wilder had weighed in at a career-heaviest but was still three stone lighter than Fury, and that weight was masterfully utilised by the challenger as he leaned onto the champion. Fury ended the sixth round landing a big left hook while covered in Wilder’s blood and showboating by poking his tongue out.

Fury continued battering Wilder around the ring and, mercifully with the champion stuck in a corner, the towel was flung into the ring to save him.

Fury celebrated by singing American Pie, with his new championship belt draped over him.

All of the world heavyweight titles now reside in Britain and, pre-fight, Anthony Joshua’s promoter Eddie Hearn speculated that it would be possible to agree an undisputed title fight against Fury. Moments after Fury’s win, Hearn called for him to face Joshua next.

Joshua holds the IBF, WBA and WBO belts and a dream fight against Fury would finally crown one ruler of the heavyweight division.