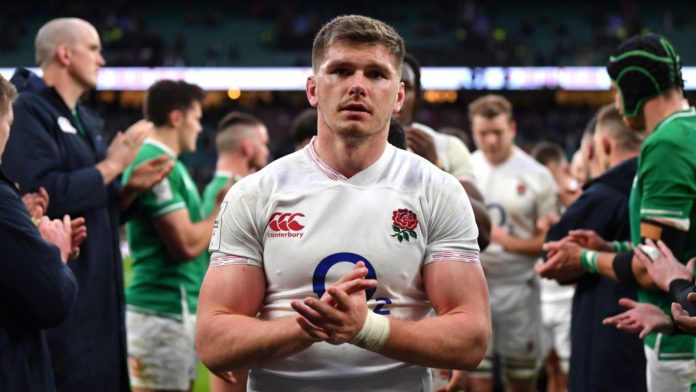 England kept their Six Nations title hopes alive with a comprehensive 24-12 win over Ireland at Twickenham on Sunday.

Elliot Daly: A game to revive the prospect that he can be a long-term option at full-back. Started explosively and played with freedom. 8/10

Jonathan Joseph: Any doubt over his suitability to start on the wing quickly faded as he danced into space and chased everything down. 7

Manu Tuilagi: England are so reliant on his ability to break the gainline and here he was an unstoppable force. 8

Owen Farrell: In the father-v-son duel against Ireland coach Andy, it was England’s composed captain who emerged with bragging rights. 8

Jonny May: Unable to make the eye-catching breaks that are his calling card but he did the less glamorous work brilliantly. 7

George Ford: Pounced on Johnny Sexton’s fumble to open the scoring and his clever kick led to a try for Daly. 8

Ben Youngs: A ball of energy who made good decisions, but also capable of making influential mistakes. 7

Joe Marler: Scythed down green shirts in a relentless defensive shift and was always in the thick of the action. 7

Jamie George: Growing in influence throughout this Six Nations but is being pushed hard by Luke Cowan-Dickie. 8

Kyle Sinckler: Another player who is beginning to find his feet after a slow start to the Championship. Gave Ireland plenty of verbals. 7

Maro Itoje: A strip of the ball in the tackle was trademark Itoje, who carried the fight to Ireland. 8

George Kruis: Rarely produces anything spectacular but his work-rate is huge. He carries and tackles with commitment. 8

Courtney Lawes: On the day he equalled Martin Johnson’s 84-cap record for a lock, Lawes was named man of the match. Destructive. 9

Sam Underhill: Smashed backwards in one early carry but recomposed himself and was a physical menace thereafter. 7

Tom Curry: The debate will continue to rage over whether he is a No 8 after this peripheral performance. 6

Replacements: Ellis Genge is making a habit of having a major impact off the bench and against Ireland, he wasted no time in getting under their skins. Cowan-Dickie must soon be given a start. 8

Jordan Larmour: Caught well under pressure early on but, at times, the 22-year-old appeared to be targeted by England and fell below his recent standards. 5

Andrew Conway: On occasion struggled to cope with pace of opposing wing Jonathan Joseph and had little chance to impress going forward before being forced off in the second half for a head injury assessment. 5

Robbie Henshaw: Bulldozing try briefly brought Ireland back into the contest. Later escaped punishment for a late but vital tackle which prevented Jonny May adding to England’s lead. 6

Bundee Aki: Offered little for his team and, on this performance, could see his position at inside centre come under threat for the remainder of the tournament. 4

Jacob Stockdale: Inexplicable hesitation from the wing allowed England to score a second try and take complete control of the contest. Contributed little from an attacking point of view. 3

Johnny Sexton: A dreadful fumble, which allowed George Ford to score the opening try, set the tone for his team’s performance, while he also squandered a simple penalty and was guilty of some poor kicks. 3

Conor Murray: The underwhelming scrum-half was punished when a misplaced exit kick culminated in England’s second try. Struggled to dictate play as the hosts dominated, before being replaced. 5

Cian Healy: Limped off injured in the aftermath of the hosts’ second try to be replaced by Dave Kilcoyne after being part of a team struggling to contain the aggressive hosts. 4

Rob Herring: Part of a front row which repeatedly lost their battles, resulting in England romping to a third successive emphatic success over Ireland. 5

Tadhg Furlong: After plenty of pre-match talk around the scrum, was guilty of conceding the first scrum penalty of the afternoon during a pedestrian performance from the visitors. 5

Devin Toner: The lock’s first start since his shock World Cup omission was one to forget. Will probably return to the bench once Iain Henderson returns from a short period of paternity leave. 5

James Ryan: Showed incredible work-rate and repeatedly put his body on the line, while finding ways to impose himself, despite limited opportunity to do so. 7

Peter O’Mahony: Produced an important pick-up and carry in the build-up to Henshaw’s score as Ireland started the second period strongly. 6

Josh van der Flier: Among the few who could hold his head high after a dismal opening 40 minutes but was came out second best against opposite number Sam Underhill. 6

CJ Stander: Once again one of Ireland’s top performers once again but, on this occasion, that was not a difficult feat. Involved in a petty altercation with Owen Farrell but, despite the England skipper’s claims, appeared to slap, rather than punch. 6