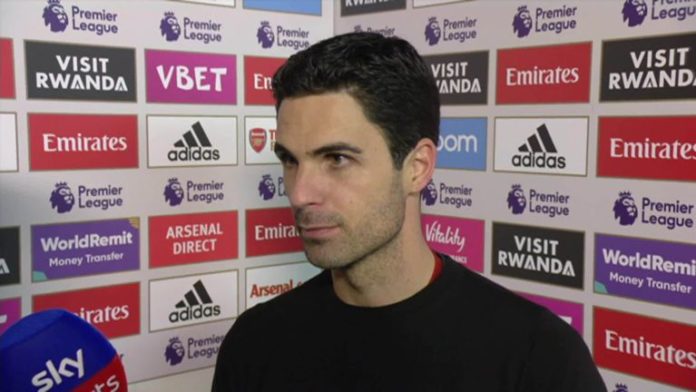 Plus Arteta says not all game scenarios suit Mesut Ozil, requiring help from his team-mates

Mikel Arteta admits Arsenal have a challenge to convince Pierre-Emerick Aubameyang to stay at the club, but feels the striker is currently enjoying his role.

Aubameyang struck twice in Arsenal’s 3-2 victory over Everton on Super Sunday, his 18th and 19th goals of the season to go alongside a fine defensive display from the 30-year-old.

Arteta explained how he had questions for Aubameyang when he took over in December regarding his willingness to track back, and opened up on Arsenal’s challenge to keep him, with his contract up in the summer of 2021.

“I think it has been tough for him, a player like him has had a lot of disappointments over the last few years because he has big expectations, he wants to play for the biggest club, in the biggest tournament, and be up there with the best players in the world. We have to try to support him and try to give him everything as a club so that he feels fulfilled here. That is the challenge we have.

“He needs to feel fulfilled, when he does that, we show appreciation too. Unfortunately, we are not that good that we can allow players not to do that [just score and not work].”

He also told Sky Sports: “He is our most important player. There’s no question about the impact he has on this team, so if I and the club can, we will try to convince him to stay.”

Regarding his ability to track back, Arteta also said: “My questions when I took over were 1) does he want to do it? And 2) can he physically do it. Once I found out physically he can do it, it was about convincing him that he needs to do it every three days, and he is showing that.”

Arteta also gave an honest assessment of Mesut Ozil, who also showed good willing on Super Sunday, with his manager admitting some game scenarios don’t suit the German, meaning he requires a structure from his team-mates.

“I am very pleased with him. I played with him and I know him, so I try to pinch him as much as I can to do what he needs to do, because I know how much he can give on the offensive side.

“Today is a good example; when we are dominant, when the process is properly done, it is the type of game he wants.

“When it becomes like this, it is not his game. So he needs his team-mates, he needs the right structure and organisation for him to flourish. Sometimes it is not his fault, it is about the team not supporting what he needs.”

Carlo Ancelotti was pleased with his side’s attacking show at the Emirates, but says they will never win by conceding goals like they did on Sunday.

“The performance offensively was really good, a lot of opportunities, but defensively really poor, we conceded three goals, it is not acceptable to concede three goals like this, and normally you lose the game,” he said.

“We were able to equalise at the end of the first half, and we knew because they played Thursday they could lose energy, and they did, and we had opportunities to score, but the key point is we concede three goals too easy. This is the reason.

“We are [going] in the right direction, but these are mistakes that you have to learn from. We did a good performance, but the fact we were not focused defensively means we go home with no points.”

Arsenal now host Olympiakos in their Europa League round of 32 second leg on Thursday at 8pm, before going to Portsmouth on March 2 in the FA Cup fifth round at 7.45pm. Everton host Manchester United on Super Sunday at 2pm, live on Sky Sports Premier League.