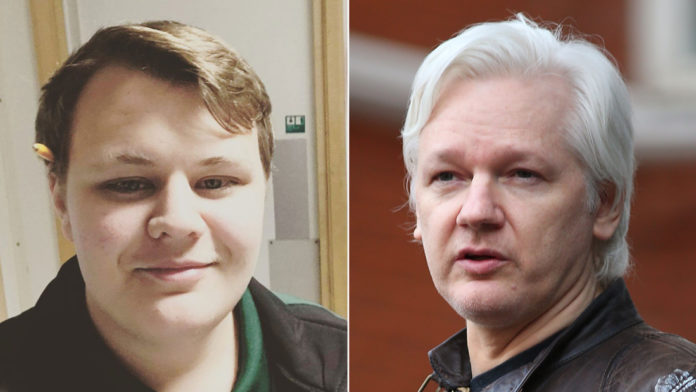 Radd Seiger, lawyer and spokesman for the family of Harry Dunn, said the US has “launched the single greatest attack on the so-called special relationship between the countries in modern memory” by declining the UK’s requests to extradite Sacoolas, who is accused of causing Dunn’s death while driving on the wrong side of the road last August.
He said the UK should respond by rejecting any American requests for extradition, including that of Julian Assange — the WikiLeaks founder whose extradition hearing begins on Monday.
Assange was arrested in April last year at the Ecuadorian Embassy on a US extradition warrant, and faces 18 charges in the US for his alleged role in encouraging, receiving and publishing national defense information.
“No one is above the law and no one must be allowed to evade justice if they manage to flee a country, whether diplomat or not,” Seiger wrote in a statement.
“The US is not behaving like an ally and has effectively thumbed its nose up at the UK,” by declining attempts to force her to return, he added.
The British government and Sacoolas’ lawyer Amy Jeffress did not immediately respond to CNN’s request for comment on Seiger’s statement.
Sacoolas was granted diplomatic immunity after the crash and sparked international controversy after being allowed to return to her home country. Her case has caused a major diplomatic stalemate between the countries, which escalated when Secretary of State Mike Pompeo turned down Britain’s request in January.
A State Department spokesperson cited Sacoolas’ diplomatic status at the time of the accident and said granting such an extradition “would render the invocation of diplomatic immunity a practical nullity and would set an extraordinarily troubling precedent.”
Downing Street had previously said that Prime Minister Boris Johnson has urged President Donald Trump to return Sacoolas.
“I now demand that the UK authorities block any further extraditions to the US, including the one of Julian Assange, until such time as Anne Sacoolas is extradited and back on UK soil facing the justice system here,” Seiger wrote.
Dunn, 19, was riding his motorcycle when he was involved in a fatal collision with Sacoolas, who was driving on the right-hand side of the road.
After Sacoolas was charged with causing death by dangerous driving in December, a State Department spokesperson said they did not believe the decision to be a “helpful development.”
“We express our deepest sympathies and offer condolences to the Dunn family for their loss. We will continue to look for options for moving forward. We are disappointed by today’s announcement and fear that it will not bring a resolution closer,” that State Department spokesperson said.
Jeffress said in December that while her client was “devastated” by the accident, she would not return voluntarily to the UK.
“We have been working with the UK authorities in an effort to resolve this matter,” Jeffress said in a statement.
“This was an accident, and a criminal prosecution with a potential penalty of fourteen years imprisonment is simply not a proportionate response. We have been in contact with the UK authorities about ways in which Anne could assist with preventing accidents like this from happening in the future, as well as her desire to honor Harry’s memory. We will continue that dialogue in an effort to move forward from this terrible tragedy. But Anne will not return voluntarily to the United Kingdom to face a potential jail sentence for what was a terrible but unintentional accident,” she added.
Assange’s extradition hearing starts on Monday, months after the he was dramatically arrested at London’s Ecuadorian embassy where he had been living for seven years.
In May, he was charged with 17 counts under the Espionage Act in the US for unlawfully encouraging, receiving and publishing national defense information in concert with former US Army intelligence analyst Chelsea Manning. He was initially charged in April with a single count of conspiracy to commit computer intrusion related to helping Manning obtain access to US Defense Department computers in 2010.
A protest in support of Assange took place in London on Saturday, with hundreds of activists calling for the case against him to be dropped.