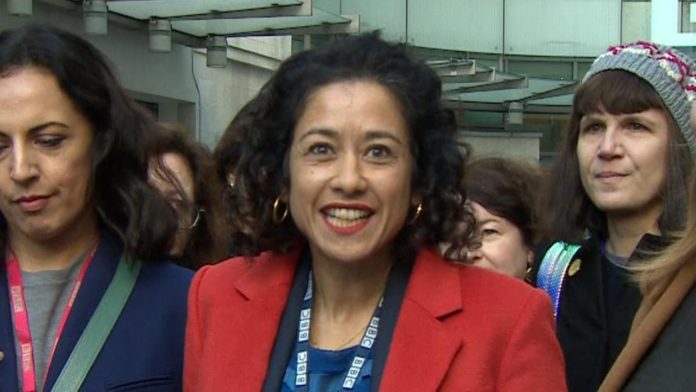 Samira Ahmed has reached a settlement with the BBC after winning her sex discrimination equal pay claim against the corporation.

An employment tribunal announced last month that it agreed with her claim that she was being underpaid for presenting the Newswatch programme compared with what Jeremy Vine earned for hosting Points Of View.

Ahmed had asked why Vine was paid up to £3,000 per episode of his show compared with the £465 she received per episode of Newswatch, but the BBC challenged her argument that their work was comparable.

Having lost the case, the BBC has now announced that it has settled with Ahmed.

The corporation added: “Samira is a highly valued BBC presenter and now these matters have been concluded we all want to focus on the future.

“We look forward to continuing to work together to make great programmes for audiences.”

Ahmed had been supported in her case by the National Union of Journalists – fighting back against the BBC’s argument that she was less well known than Vine and that her show was “relatively niche”.

The presenter, who told the hearing that she was owed almost £700,000 in back pay, has said she still enjoys working for the public service broadcaster and was “looking forward to continuing to do her job”.

After winning her claim, she said that “no woman wants to have to take action against their own employer”.

Ahmed is not the only journalist at the BBC to have voiced concerns over pay equality, which was sparked by widespread outcry over the salary of former China editor Carrie Gracie compared with men in similar roles.

Last year the BBC revealed three women – Claudia Winkleman, Zoe Ball and Vanessa Feltz – had moved into its top 10 highest-paid stars, compared with none in 2018.

The BBC has previously said tackling its gender pay gap is complex and cannot be achieved “overnight”.

According to the broadcaster, Ahmed and the NUJ would not be commenting on their settlement.