Home Lifestyle We Know What the Future of Menswear Looks Like. But What Does... 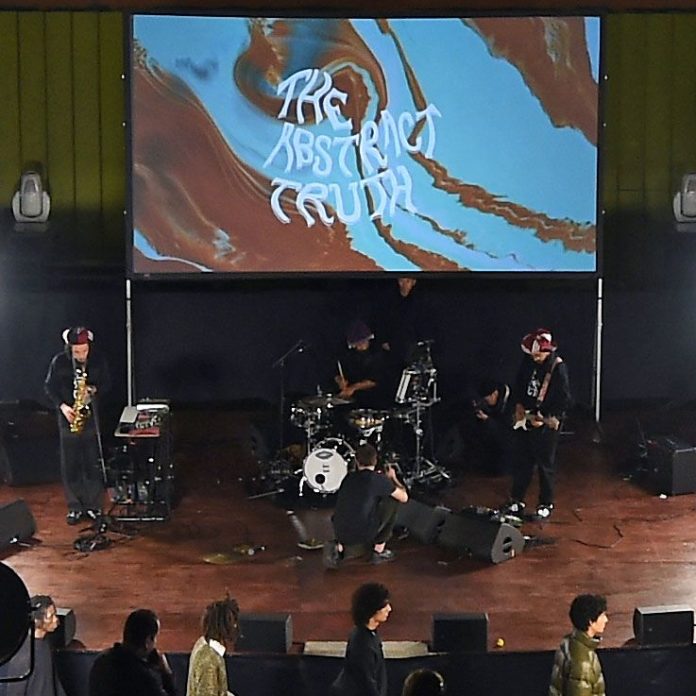 Menswear and music, always close friends, are extremely tight-knit during fashion month–the biannual preview of what’s (hopefully, probably) going to be cool in the future. Brands tend to get extra artsy, fleshing out the pageantry of catwalk shows and presentations by drawing on disciplines like dance, gastronomy, and visual art. But aside from the clothes themselves, music always does the heaviest lifting.

So a big part of the story during the fall/winter 2020 shows, which just wrapped earlier this month in New York, was what was coming through the speakers—or, in some situations, direct from the string section. Or guitar amps, as was the case at Coach. Casting Debbie Harry as a surprise guest, the brand showed Jean-Michel Basquiat-printed clothing with a soundtrack by the leader of Blondie, a punk and rap legend and close personal friend of the artist. (Check out Blondie’s “Rapture” video where Basquat plays a DJ at 1:55).

Visually, menswear is looking increasingly androgynous, and everyone is trying to bring suiting back. But how is menswear sounding?

Music is about community

In addition to bringing back the sweater vest (the sweater vest is good!) and creating a signature style that lands between Yohji Yamamoto and Engineered Garments, designer Nicholas Daley stands out in fashion for being uncommonly supportive of a specific subgenre: contemporary jazz fusion from London. Every time we get a new Daley collection, we get an update on this young, heady scene, which blends jazz with rock and hip-hop. It’s a lucky connection. He keeps delivering, and so does the scene.

Past Nicholas Daley shows included full concerts by the group Sons of Kemet and guitarist Mansur Brown. This season on the bandstand it was rapper and producer Rago Foot, known for work with the poetic NYC rappers King Carter and MIKE, along with multi-instrumentalists Kwake Bass & Wu-Lu. These guys are not likely to blow up in the mainstream or even appear on a bill for more than $15. But they’re part of Daley’s milieu and what he’s personally into: current, high-level bohemianism.

Daley is vocal about being musically inspired by his parents, who ran the venue Reggae Klub in the Scottish Midlands, where he grew up. Their business was fueled not by strong local demand but their own passion for reggae. Following in their footsteps, he puts money in musicians’ pockets based on his taste, and makes “fan” into an economic role by doing his part to sustain a mini-movement.

Music is about chasing perfection 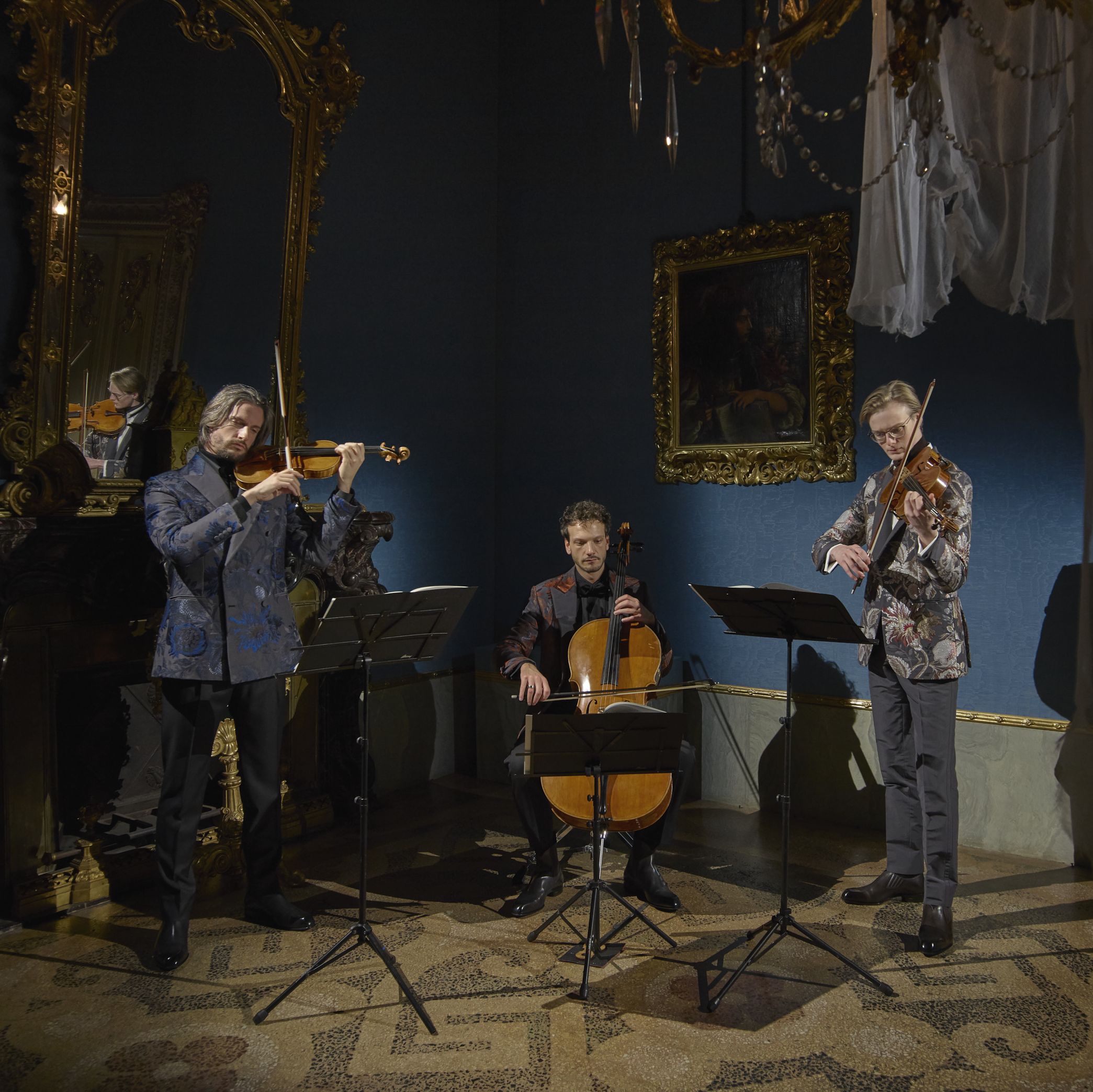 Tailoring gets no more presidential than Brioni, outfitter of world leaders and captains of industry, sourcer of exotic wools from rare goats–not to mention thrower of the first men’s fashion show ever, circa 1952.

Theirs is exceedingly old-school menswear in today’s streetwear-heavy climate. But for Brioni’s 75th anniversary, creative director Norbert Stumpfl and presentation organizer Olivier Saillard flipped that as a strength, reminding us that in fashion as in music, art is too often reduced to something cheap that barely gets the job done. Producing something deeper and better might mean going back in time.

The brand showed it’s collection in a Florence palazzo lit strictly with candles, with live-performing classical musicians in various rooms as models, all expert players who have more than put in their 10,000 hours.

The effect was to step out of time entirely and celebrate the pursuit of ideal forms. Brands are constantly “reinventing the suit,” trying to cater to guys who might be suit-curious. This was not that. It was not Brioni trying to be clever or current. In fact as perfect as the tailoring was, the guys–including Andreas and Ingemar Brantelid (Royal Danish Orchestra), Andrea Lucchi (Rome’s Orchestra Santa Cecilia), David Pia (Conservatory of Geneva), Ulrich Wolff (Berlin Philharmonic)–looked almost dorky. I mean, a regular-looking dude in a double-breasted suit posing with his French horn?

But Brioni makes clothes for rich guys who 100% don’t care what I think. And who don’t really exist in the present. They’re focused on next year’s projected earnings, and want to wear the best suits available.

Music is about lifestyle

New York City designer and gay scene icon Telfar Clemens booked the NYC free jazz band Standing on the Corner to play his show, also in a palazzo, a group which performs in various formations led by Gio Escobar–who counts among his blessings being Solange’s boyfriend. She was there, front row. The vibe was similar to Daley’s show in that Telfar is tapping into a vital Bohemian NYC/LDN mixture.

It differed by its extreme looseness. Telfar explained he had no plan for the show until 24 hours beforehand–that he organized the proceedings by getting a carefully selected group of people together the night before, to party, dine, jam, go clubbing, and strategize.

During Standing on the Corner’s set, London party fixture Carrie Stacks joined on piano, and toward the end rising singer/rapper Hawa got on the mic. The music was spacey, in line with Standing on the Corner’s two albums—which sound like short-circuiting radio broadcasts with themes of liberation from white supremacy. Models walked around the band in a circle, stepping on last night’s food waste repurposed as décor.

The message was, “you can sit at the table, but we’re eating first.” And that was justice: fashion is never not ripping off black and brown youth. So this was partially about making sure some of the wealth was redistributed. The music, as good as it was, was probably even better at the jam the night before. Which for the fancy people in the building, will forever be unattainable. Viewed one way: the essence of luxury. 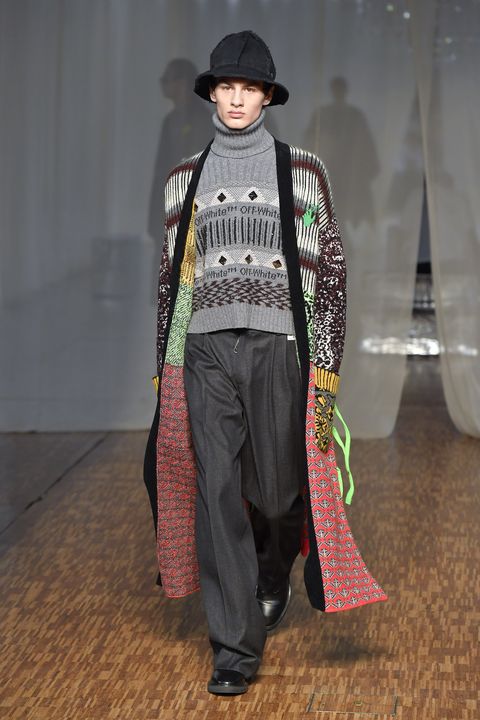 Designer and erstwhile DJ Virgil Abloh had hoofer (tap dancer) Cartier Williams score his show, adding percussion to a soothing playlist of Michael Kiwanuka and lyrical-miracle backpack rap by Westside Gunn, the Purist, and Roc Marciano. As last season’s show featuring music by Madvillain made clear, Abloh is a backpacker. He’s also about expanding people’s idea of what black art is. The hoofing was not some weird inclusion: it’s a deeply rooted hip-hop antecedent, Williams is a master teacher, and Abloh was connecting the dots. Also during fashion week, Off-White morphed into a video studio and directed visuals for Pop Smoke and Quavo’s “Shake the Room.” It’s something Abloh likes to do now and again: he directed of A$AP Rocky’s “Fashion Killa” music video too, back in 2013.

Marilyn Manson’s two-decade-old cover of The Eurhythmics’ “Sweet Dreams” soundtracked Alessandro Michele’s men’s collection: audio grotesquerie complementing his more-is-more approach. The sound of Manson’s voice is gross on purpose, and it was interesting to see Michele continue to revel in themes of revulsion and doing too much, in an art form that’s supposed to be beautiful. Conflicted vibes, to say the least. 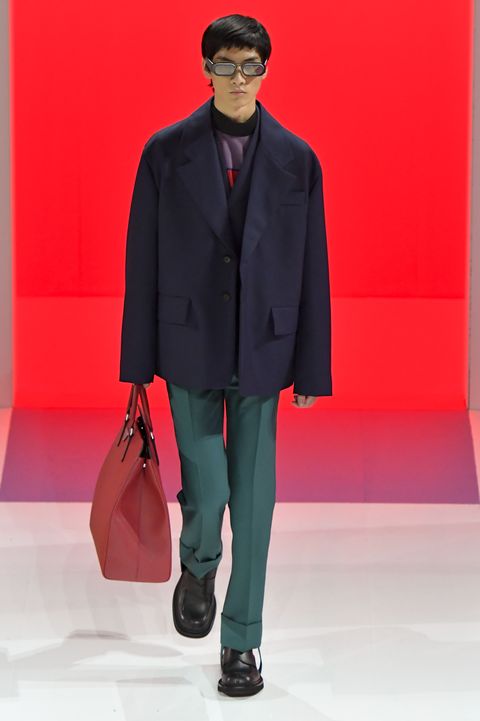 For one of its most restrained and straightforward collections, Prada went with music by epic opera composer Richard Wagner and perfect ‘80s post-punk band New Order. The combination was both grandiose and eternally chill. And since Prada FW20 looks like something you can wear for a night at the symphony or to brand ambassador Frank Ocean’s club night, the mix was right on.

Valentino gets an honorable mention for believing in FKA Twigs as a singer. The artist’s pole dancing and extremely flexible stage presence is what gets most of her headlines. And while she deserved a much darker room for her mysterious songs, she stole the show from a strong collection with a live performance that was somehow both incredibly intense and barely there. 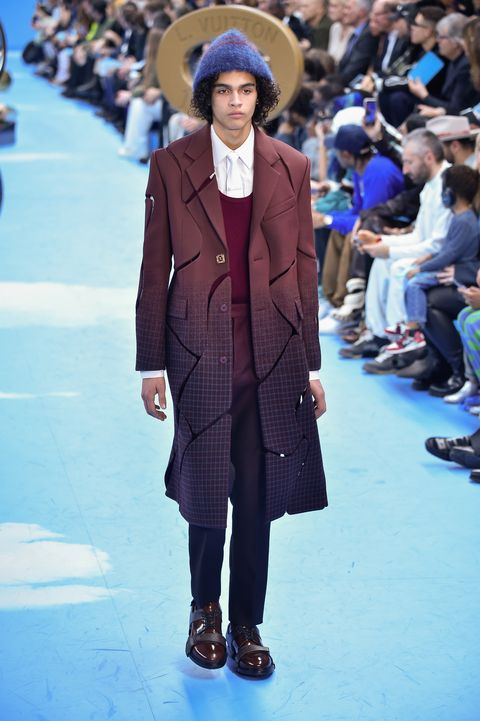 For Abloh’s second show of the season, he continued his ongoing, unstated mission to educate about musical provenance. Positioning electronic music icons Cybotron above the models in a heavenly booth (Juan Atkins, Tameko Williams and Laurens von Oswald), he made two points: These are gods, and techno is black.

iOS 14.3: Apple releases the third beta with ProRAW support and other changes