Home Sport MNF: Who are the greatest English club side? 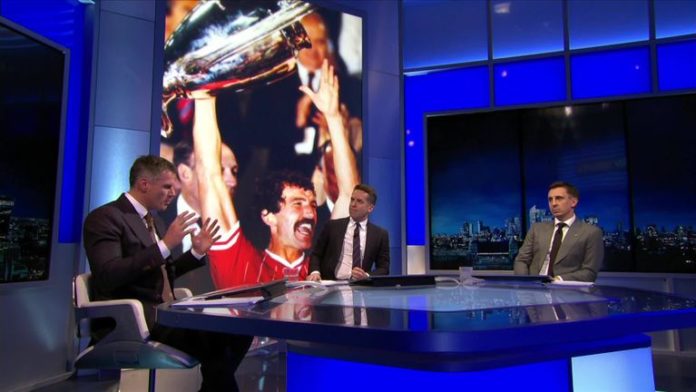 Monday Night Football rank the greatest English club sides using their own points system. Do you agree with the results?

It is one of the oldest debates in football but Gary Neville and Jamie Carragher have tried to settle it with the help of their own points system.

The Monday Night Football duo used a three-season period for each team and awarded points for the trophies won during that time frame.

Here are the results and, in the words of Neville and Carragher, what made each of these teams great…

Jamie Carragher: “I have always felt that this era was a little bit underappreciated by Liverpool because a lot of them go back to the early ’80s. Maybe that team would have beaten this team but to win a European Cup back-to-back elevates you massively. This team won a UEFA Cup too – three European trophies in three seasons. That is unbelievably special.”

Gary Neville: “I don’t think Manchester United have ever had a team that had so many world-class players. They had eight or nine who were almost the best in their position. It was an unbelievable team. I think it was the greatest Manchester United team of all time.”

Carragher: “If you ask Liverpool fans for their greatest team, I think a lot of them would go for this one because of the names. Kenny Dalglish was certainly the best striker, Graeme Souness was one of the best central midfielders and Alan Hansen would go straight into the team as one of the best centre-backs. So, there were those huge figures.

“This team had some of the greatest players in Liverpool’s history and some of the biggest characters also. This team was almost like a machine and to do what they did with three leagues in a row, it’s not easy. In most Liverpool circles they’d say this team was the greatest, but they haven’t come out on top.”

Neville: “In a single season, to win the treble, it’s the greatest achievement of Manchester United’s history. However, that team then disappointed for two years after that in Europe. We won three leagues on the bounce but then we didn’t go back-to-back in Europe, and that is the disappointment of that team. We didn’t go on and do it again and again. The greatest teams, you go and win it again and again.”

Neville: “We did say that would have to be some context applied to these points and this is the team that makes me feel most uncomfortable seeing them in fifth place because of the scale of the achievement.

“But would they be better than the greatest Liverpool sides of that era? Probably not but the scale of the achievement just needs some special mention.

“To do what Clough did there at Nottingham Forest, his managerial achievements are right up there with anything you could ever wish for.”

Carragher: “The first game I can ever remember watching was that 2-0 win against Watford in the FA Cup final. The best way to describe how good it was is it was my first ever season watching football, so I think that’s the norm. That Everton team got to three cup finals on the bounce. I used to think going to Wembley was like going to Alton Towers. It was a day out you did at the end of every season. They were so close to winning the double in ’86 and that would’ve shot them right up this list. The biggest compliment I can pay that team is that if I see some of those players at functions, they are still your heroes. You still look up to them now, no matter how old you are and it will always be the same.”

Carragher: “It wasn’t just the achievement of trophies with this team, it was the actual way they played football. And probably, that legacy went on for years where you sometimes looked at a player and said: ‘He’s a Tottenham player.’

“Maybe that comes from the way this team played and they had some greats.”

Carragher: “Ron Saunders, who passed away just a few months ago, was a bit of a legend in the Midlands. He managed lots of different clubs there, but it was actually his role at Aston Villa that he’s remembered for. The strange thing was he actually moved on before they got their hands on the famous trophy. It was Tony Barton who came in, but he produced that team. It was Dennis Mortimer that lifted the trophy and Peter Withe getting the famous goal.”

Neville: “The legacy is huge in terms of the impact, not just of that team of Best, Law and Charlton, that defined an era in Manchester, but also the recovery from the tragedy of the Munich air crash.

“There were a lot of what would be the values of Manchester United today that are attributed to that 10-year period from 1958 to 1968. In fact, when I say a lot of the attributes, I mean all of the attributes of the club today. Playing with academy players, playing with excitement and flair and ultimately playing to win all the time.

“All you attribute with Manchester United today come from that period and it’s a special period. It was an era for United where Sir Matt Busby was at the heart of it. It was pioneering and it started what the journey of the modern Manchester United is.

“When Sir Alex Ferguson took over at United he wanted to repeat a lot of the values and principles that had been achieved by the club. He respected the history of the club.”

Carragher: “That was a great era for Leeds, and they were runners-up in so much. I never saw them play but they were a brilliant team that you heard so much, that Revie team. In some ways, that Leeds team, even though they won league titles, they are probably remembered a lot for losing big games, but they were there or thereabouts throughout the 70s. They were a brilliant team and hopefully we see the club back in the Premier League next season.”

Who is the greatest English club side? Vote now…

‘I voted for a guy named Trump’: President casts his ballot...

F1 – Bottas makes it a clean sweep in practice for...

“Price is Right” coming back with no audience, other coronavirus changes