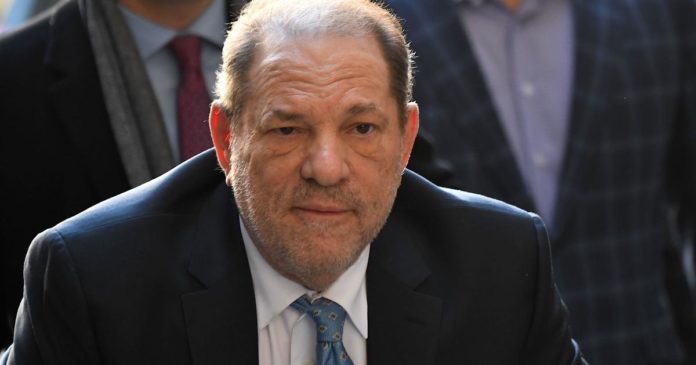 The jury of seven men and five women returned the verdict in a Manhattan courtroom after more than four days of deliberation. The high-profile trial got underway with opening statements on January 22.

Weinstein’s bail was revoked and he was taken into custody. He could face up to 29 years in prison when he’s sentenced on March 11. He had been free on bail since his arrest nearly two years ago.

But attorney Gloria Allred, who represents some of his accusers, said it should not have come as a surprise to him.

“Harvey Weinstein will now have to finally face the serious consequences of his criminal behavior” at the sentencing, Allred said.

She said Weinstein’s attorneys attempted to discredit the women, but they “will not be silenced.”

Jurors heard harrowing and at times emotional testimony from six of Weinstein’s accusers, including aspiring actress Jessica Mann, who accused him of raping her in a New York hotel room in 2013.

He was cleared of rape in the first degree in Mann’s case — a charge which involves the use of force or the threat of it — but was convicted of rape in the third degree, which means having sex with a person without their consent. The conviction carries a possible sentence of four years.

Weinstein was also convicted of committing a criminal sexual act for allegedly forcing oral sex on former production assistant Miriam Haley in 2006. He faces a possible sentence of up to 25 years on that count.

“Sopranos” actress Annabella Sciorra also testified in the case. She said Weinstein barged his way into her New York apartment in late 1993 or early 1994, pinned her to a bed and raped her.

Weinstein was not charged with raping Sciorra because the alleged incident happened too long ago under state law, but the two counts of predatory sexual assault hinged on her account. That charge, which carried a possible term of life imprisonment, required jurors to find that he sexually assaulted more than one woman.

Three other accusers also took the stand as prosecutors sought to prove Weinstein had a pattern of assaulting women.

The trial was the first criminal case to arise from the barrage of allegations against Weinstein. More than 80 women in total have accused Weinstein of some kind of sexual misconduct. The allegations were first exposed in reporting in 2017 by The New York Times and The New Yorker, galvanizing the #MeToo movement that has empowered women across the globe to come forward with allegations of sexual assault and harassment against powerful men.

Though the jurors did not convict on the predatory count, Allred praised her client Sciorra as “absolutely one of the bravest women I know.” In a statement, Sciorra said her testimony was “painful but necessary.”

“I spoke for myself and with the strength of the eighty plus victims of Harvey Weinstein in my heart,” Sciorra said. While we hope for continued righteous outcomes that bring absolute justice, we can never regret breaking the silence. For in speaking truth to power we pave the way for a more just culture, free of the scourge of violence against women.”

Weinstein claimed any sexual encounters were consensual. Defense attorneys sought to discredit the accusers’ accounts by pointing to some of the women’s friendly communications with Weinstein after the alleged assaults, painting them as opportunists who sought to use Weinstein’s power in the movie industry to boost their careers. But prosecutors argued Weinstein wielded that power to manipulate and silence his accusers, whom they said he viewed as “complete disposables.”

“Harvey is very strong, Harvey is unbelievably strong,” Rotunno said. “He took it like a man. He knows that we will continue to fight for him, and we know that it’s not over.”

Manhattan District Attorney Cyrus Vance Jr. praised the prosecutors in the case and said of the women who testified: “We all owe an immense debt to you, who have the courage beyond measure to speak your story to the world, to this courtroom, at great personal risk and at great personal pain.”

“These survivors weren’t just brave, they were heroic,” he said.

After the verdict, jury foreman Bernard Cody was asked by the Associated Press how the deliberations were for him personally. He responded: “Devastating.” He did not elaborate.

During tearful testimony, Mann described a “degrading” relationship and sometimes forced sexual encounters with Weinstein when she was an aspiring actress in her 20s. Mann told jurors that Weinstein trapped her in a New York hotel room in March 2013 and angrily ordered her to undress as he loomed over her, and then raped her.

Haleyi said Weinstein had sent a car to pick her up for what she thought would be a friendly meeting about her career in 2006. The two were having a “normal conversation,” she said, when Weinstein lunged at her and tried to kiss her.

Haleyi said she rejected Weinstein’s advances, got up from the sofa and started backing away. But she said Weinstein pushed her into a bedroom, pinned her to a bed and forcibly performed oral sex on her.

Haleyi said she tried to resist, telling him she was menstruating and yelling “No, no, no.”

“I did reject him, but he insisted,” said Haleyi. “Every time I tried to get off the bed he would push me back and hold me down.”

Weinstein is also expected to face sexual assault charges in Los Angeles, but the timing of that case remains unclear.