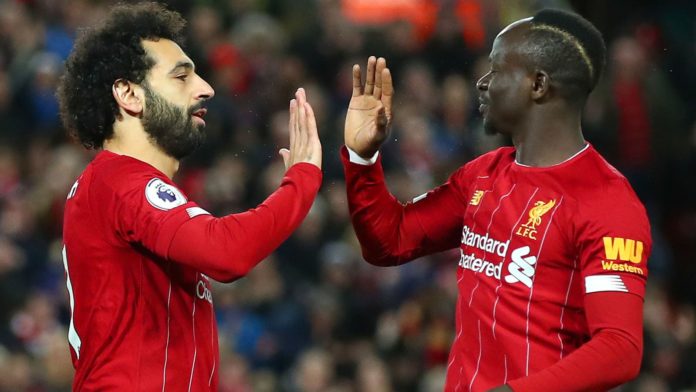 It looks a matter of when, not if, Liverpool lift the Premier League title – and they could become record-breakers along the way.

With a 22-point lead over their nearest rivals after beating West Ham 3-2 on Monday Night Football, Jurgen Klopp’s side are already enjoying the best season in history of any club from Europe’s top-five leagues in terms of points won.

After equalling Manchester City’s record winning Premier League run against West Ham, Klopp said: “I never thought it would be broken or equalled. We did it and I cannot believe it happened to be honest.

“Whatever will happen this season, it is an effort of all of us. I could not be more thankful or appreciate the support we get.”

Chairman Tom Werner said recently: “I keep telling everyone to really savour this, the record that we have kept so far – I don’t think it is going to come along again so quickly.”

There are plenty of reasons for Werner to enjoy the moment – Liverpool are still in the Champions League and FA Cup, as well as remaining on course for the first unbeaten Premier League season since Arsenal’s Invincibles in 2004, but that’s far from the only record they could be rewriting by the end of the campaign.

The records Liverpool are chasing down…

When could Liverpool break it? Watford (A), February 29

A perfect half-season between draws with Everton and Crystal Palace set Manchester City on their way to a record-breaking points tally back in 2017/18 – more on that later – but Liverpool have that total in their sights now with a run of wins stretching back to late October.

They have now matched the record after the victory against West Ham but a win at Watford – who they beat with relative ease in the reverse fixture – will break City’s record.

When could Liverpool break it? Aston Villa (H), April 11

When Arsenal racked up 49 games unbeaten, it was questioned whether there would ever be a team to surpass Arsene Wenger’s Invincibles.

There have been impressive unbeaten runs since then – Chelsea were beaten only once in the season that magnificent run came to an end, and Manchester City lost only twice en route to the title in 2017/18.

Liverpool’s route to a half-century

But Liverpool have not tasted defeat since their ultimately costly 2-1 reverse at the Etihad last January and the Reds will become the first team to go 50 Premier League games unbeaten if they can get something from each of their next seven league matches.

The 50th game is set to be their home clash with Aston Villa on April 11, but pending FA Cup progression could also be away to Brighton a week later.

When could Liverpool break it? Brighton (A), April 18

Manchester City ripped up the record books when Pep Guardiola lifted his first Premier League title in 2018, with the kind of dominating season the league had never seen before. Despite City winning all-but six games across the entire campaign, and repeating that feat last season, Liverpool are well on-course to not only beat City’s record haul, but potentially better it.

If they keep up their stunning run of wins, which would include beating both City and Everton away, they could break Guardiola’s wins record at Brighton in mid-April and potentially end up with a mammoth 37 wins by the end of the season. They can still afford to drop points in four games before the end of the season and overtake City.

When could Liverpool break it? Burnley (H), April 25

Gabriel Jesus’ last-minute winner for Manchester City at Southampton on the last day of the season in 2017/18 didn’t mean much in a title race that was long-since over but Guardiola’s celebrations on the touchline at St Mary’s told their own story about how significant reaching the target of a three-figure points tally was for the manager.

Most points in a Premier League season

City were only two points away from matching that last season, but Liverpool can afford to drop 11 points between now and the end of the campaign and still beat that incredible figure. But to put that into context with respect to their current form, it’s taken them since January 3 2019 to drop their last 11 points.

At present, Liverpool could smash past 100 points against Burnley on April 25, and could even afford one draw up until that point to still break the record.

When could Liverpool break it? Arsenal (A), May 2

Winning all-but two away games in a Premier League season sounds like a fantasy to most – after all, even the highest-points winners in the division’s history, Manchester City’s 2017/18 team, dropped points on three of their road trips.

But Liverpool are potentially five matches away from beating that record. They could make history against Arsenal at the Emirates – a ground where they have picked up three points only once in their last six visits.

Liverpool can afford to drop points in only one away game before the end of the season to better City’s record – and still have to travel to Manchester City and Everton, as well as that visit to Arsenal.

When could Liverpool break it? Chelsea (H), May 9

This could prove a tough one for Liverpool to beat – winning every single home game in a Premier League season takes some doing. That said, there are only six more games to go for Klopp’s men to become the first team to ever manage the feat.

Of those six, five are against teams currently in the bottom half with only fourth-placed Chelsea, their last league opponent at Anfield, and the afternoon where they will likely be presented with the Premier League trophy, inside the top 10.

Liverpool have not lost a league game on home soil since Crystal Palace beat them in April 2017, and have since won 43 and drawn 10 across what’s approaching three unbeaten years.

When could Liverpool break it? Newcastle (A), May 17

Not so much an Invincibles record as an incredible timespan – if Liverpool end the Premier League season unbeaten they will guarantee they surpass Arsenal’s all-time record duration of almost 18 months, which would automatically be exceeded without a ball being kicked, during the close season on June 23.

Whether Klopp will view this as a record worth chasing, especially if Liverpool are still fighting in the Champions League and FA Cup, remains to be seen, but it would certainly give them something extra to take into next season, by which point they would have already exceeded Arsenal’s record by 46 days.

When could Liverpool break it? Manchester City (A), April 4

Liverpool are currently 22 points clear and will probably break this record as long as they only drop two points more than Manchester City and four more than Leicester before the end of the season.

Liverpool could already be crowned Premier League champions by the time they visit the Etihad in early April, but in theory they could rub their predecessors’ noses in it by ensuring they win the title by a record-breaking margin with victory in their nearest league rivals’ backyard.

However, for this to happen, Man City, Leicester and the teams below them in the table would need to drop significant numbers of points with Liverpool winning all of their games – and even then they would have to wait to seal the record if their league game with Crystal Palace on March 21 is re-arranged and due to the FA Cup.

It is far more likely they will seal this record in the final games of the season.