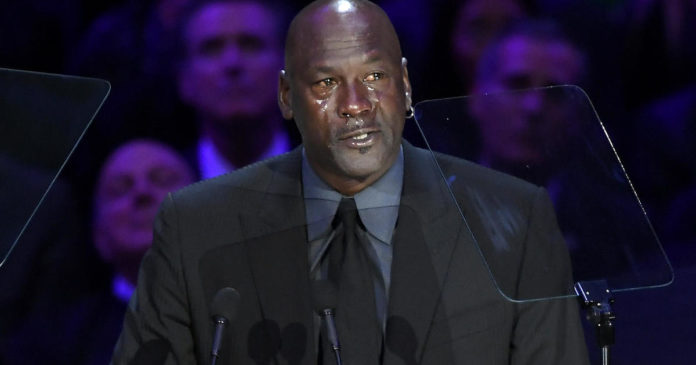 NBA legend Michael Jordan gave a stirring speech in honor of Kobe Bryant at a memorial service honoring the player and his 13-year-old daughter Gianna on Monday. Jordan, who said Bryant was “like a little brother” to him, cried through much of the emotional tribute, which comes weeks after Bryant, Gianna, and seven others were killed in a helicopter crash in California.

“You know, all of us have brothers, sisters — little brothers, little sisters for whatever reason always tend to get in your stuff, your closet, your shoes, everything. It was a nuisance, if I can say that word, but that nuisance turned into love over time,” Jordan said of the Lakers star during the memorial at the Staples Center in Los Angeles.

“When Kobe Bryant died, a piece of me died,” Jordan added. “As I look in this arena and across the globe, a piece of you died.”

Amid the moving speech, Jordan offered a brief moment of humor when he joked about the widely circulated “Jordan crying meme.”

While holding back tears, Jordan joked that he’ll now have to “have to look at another crying meme” for years to come, prompting laughter from the audience.

“I told my wife I wasn’t going to do this, ’cause I didn’t want to see that for the next three or four years. That is what Kobe Bryant does to me.” Jordan added. “He knows how to get to you in a way that affects you personally.”

Thousands of fans attended the sold-out public memorial, which also included performances from Beyoncé, Alicia Keys and Christina Aguilera. The Lakers said proceeds from ticket sales would be donated to the Mamba and Mambacita Sports Foundation.

A private funeral was held at Pacific View Memorial Park in Corona Del Mar on February 7, according to Entertainment Tonight.

Justin Carissimo contributed to this report.