Faith Trznadel was born without a tibia bone, and when she was 10 months old, doctors had to amputate her lower leg.

“The hardest part is the staring, the snickering,” said Faith’s mother, Sheila Trznadel, about how other people treated her daughter. “One message to get across to people is it’s OK to ask questions. … It’s better to ask questions than just stare. (It’s) getting rid of that stigma.” 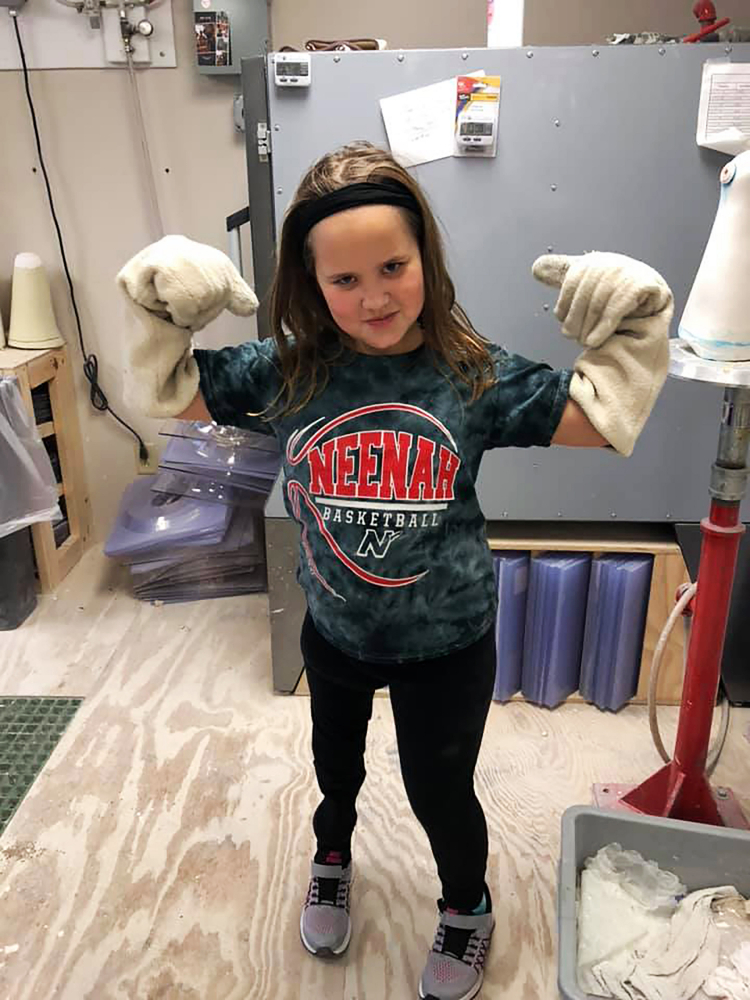 When Faith first started walking, she was fitted for a prosthetic. As a growing child, she needed a new leg every eight to 12 months. Insurance covered most of the $30,000 cost for each new prosthetic, but the family was still left with thousands of dollars in medical bills. Because of their medical plan, the total cost depended on their other medical expenses for the year.

When Faith was 5, her family realized her prosthetic was fine for walking, but not running. The walking prosthetic covered by insurance wasn’t designed for fast movement. It lacked an ankle joint, for example, and limited the speed at which Faith could move. So her family tried to get her a prosthetic that would let Faith run.

“Our insurance declared that it was not medically necessary to run,” said Trznadel, who is covered by BlueCross BlueShield, “so she couldn’t have a running leg.”

At first Faith wanted to play tag and other games, and then as she grew up, she wanted to join athletic teams. Without a specialized and more expensive prosthetic, she would be relegated to the sidelines.

Thousands of children are born with limb differences in the United States every year, and many do not have access to affordable prosthetics. Prosthetic limbs can cost from $5,000 to over $50,000, and many insurance carriers restrict financial coverage, placing limits on how much they will pay.

Adult prosthetics may last a few years, but children who need prosthetics can grow out of them as fast as they outgrow their clothes, creating a critical need for affordable, sustainable limbs.

“The amount covered may vary depending on the type of coverage the member has and the benefits allowed under that coverage,” CareFirst BlueCross BlueShield said in a statement. “Typically we provide coverage for prosthetics that are medically necessary to replace an absent or nonfunctioning body part. Repairs, adjustments and replacements due to growth or reasonable weight loss of gain, and normal wear and tear are typically considered medically necessary.”

The nonprofit sector is trying to help fill the gap in affordable prosthetic limbs in innovative ways, as well as creating communities where children can excel. For example, summer camps bring children together and provide athletic training and encouragement. Entrepreneurs are engineering ways to work with recycled plastics and new technologies.

Faith, who lives outside Chicago, is now 11 and loves dancing and gymnastics, activities she is able to pursue because of Amputee Blade Runners. The Nashville-based nonprofit group, which relies on corporate and individual sponsors and foundations for funding, provided her with a running prosthetic.

Joshua Southards, executive director of ABR, said that because most Americans in need of prosthetics are elderly, children are often overlooked. ABR works with children to provide what they need to take part in athletics, such as racing each other on playgrounds and competing in tournaments.

Sheila Trznadel is the former executive director of the NubAbility Athletics Foundation, which hosts camps for children with limb differences. NubAbility pairs children with counselors who look like they do, to build their confidence on and off the sports field. The foundation hosts several camps a year, in different locations.

This year, there are two – one in Florida focused on baseball skills and one in Idaho that will feature snow sports.

“Kids come into our camp, and they’ll be hiding their hand or putting it in their pocket, and then realizing … there’s nothing wrong with me. They walk out with their heads held high,” Trznadel said.

At camp last summer, Faith met Abbey McPherren. “They just clicked,” Trznadel said. “They both did dance, cheer and gymnastics camp together.”

Abbey is a cheerful 11-year-old with dozens of gymnastics medals. She was born with symbrachydactyly, a limb difference on her left hand. One child out of 32,000 births has this congenital condition, characterized by missing, shorter or conjoined fingers.

“I think people tend to be careful with kids who maybe only have one leg or only have one hand. … (Abbey) has taught me a lot about bravery and being courageous,” said Abbey’s mother, Melissa McPherren. “There’s no limit you can put on any kid, with any limb difference or any difference.”

Abbey has a purple and green prosthetic hand, custom-made with recycled ocean plastic by the Million Waves Project. Abbey, who lives with her family outside Seattle, is one of the project’s young spokespersons.

“We’re big ocean people,” Melissa McPherren said. Becoming involved with Million Waves has sparked a passion for ocean conservation in Abbey. “Now when she sees plastic or anything at the beach, she’s like, ‘Oh, my gosh, we’ve got to pick that up, Mom.’ “

Every year, 10 to 24 billion pounds of plastic end up in the ocean, adding to the billions of pounds already plaguing our waterways and sea life. The Million Waves Project uses plastic water bottles from beaches and from donations, shreds them and makes them usable for 3-D printers. It takes about 30 water bottles to make a hand, said Chris Moriarity, who started Million Waves with his wife, Laura Moriarity, as a project in their dining room in coastal Northwest Washington state.

Million Waves partnered with a self-described, “digital humanitarian” organization called e-Nable to crowdsource their 3-D printers, working with hundreds of volunteers all over the world who own personal 3-D printers to create custom-fit, eco-friendly prosthetic hands. The hands are provided at no cost to the recipients.

Million Waves and e-Nable match children with makers in their area. The owner of the printer and the family organize fittings and print the custom hand. Kids can even request a “Frozen”-themed Elsa hand or an “Iron Man” arm.

All of the design files are open-source and available through e-Nable.

Jen Owens is the founder of enablingthefuture.org, an online community, and the co-founder of e-Nable. In 2011, excited about their handmade steampunk science-fiction costumes, Jen and her then husband, Ivan, posted a YouTube video showing Ivan using a giant, working mechanical hand. From there, an open-source platform to share engineering ideas was born.

Owens now estimates that their network has grown to 20,000 people in 100 countries. They have made more than 5,000 hands. Owens said it is difficult to find the exact numbers because the designs and materials are all crowdsourced and open-access. People “really have no idea the impact their creativity could have on the world unless they share it,” said Owens.

Abbey and Faith have been inspired by Shaquem Griffin, a linebacker for the Seattle Seahawks, who is also limb different. Abbey was encouraged by a video showing him weightlifting with his prosthetic hand.

Sheila Trznadel said the biggest challenge was making sure the children with limb differences had community, “knowing they’re not alone, knowing that they can do anything.”