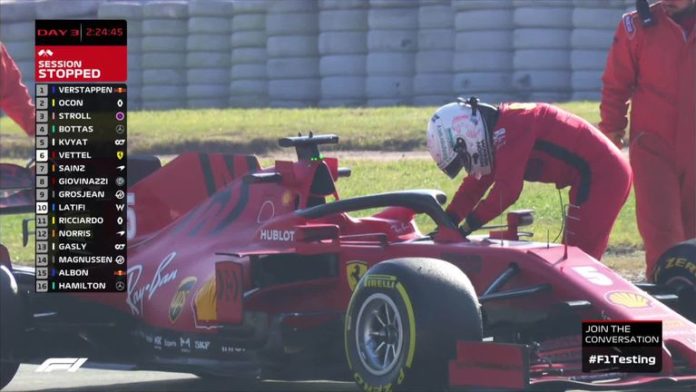 Binotto on Ferrari’s “difficult” first week of testing and reasons for “concern”; Plus, on why Vettel and Leclerc are equals, with a catch…

Ferrari are facing a critical final week of winter testing after admitting they have already fallen behind Mercedes and Red Bull in F1 2020.

Ferrari have been Mercedes’ main championship rivals in the past three seasons and, while opting for a more conservative approach with their to start to 2020 testing in terms of lap times last week, were hoping to quickly unlock the potential of their “much different” new car.

But team boss Mattia Binotto conceded that Test One was “more difficult” for the Scuderia than expected, and that F1’s most successful team are already on the back foot ahead of the start of the season.

“I think Ferrari will be a beater when you consider overall the season, but will it be a beater already in Australia? Maybe not,” Binotto told Sky F1’s Ted Kravitz in Barcelona.

“I’ve seen certainly that Mercedes and Red Bull are very fast on these first days.”

He added that Ferrari were “not as optimistic as last year”, when they were the talk of testing as they lit up the timesheets.

The fastest laps of winter testing per team

“The others are faster than us at the moment, I believe,” he said. “How much faster I think is difficult to judge.

“Do we have concerns? Certainly, yes – when you are not as fast as you would like to be.”

Ferrari finished the first week of testing as the eighth-fastest team – more than two seconds down on pacesetters Mercedes – although didn’t complete any performance runs. Their long-run pace did appear more encouraging, with Sebastian Vettel insisting the SF1000 had more downforce than last year’s car and was a “definite step up”.

Ferrari will get a clearer idea if their early concerns over the pecking order are justified at Test Two, when teams usually run qualifying-style laps.

“Maybe we’ll see a little bit more – and then heading to Australia I think we will have some answers,” said Vettel.

Binotto added: “It’s a very long season, with 22 races potentially, so I think there will be time to recover eventually. But let’s wait for [Test Two] and wait for Australia to assess what the true performance is.”

Vettel and Leclerc equals, but Ferrari prepared for orders

Ferrari have also claimed they are prepared to use team orders again in 2020 despite stating that Vettel and Charles Leclerc will start the season with equal status.

Vettel started 2019 with priority before Leclerc, in his first season at Ferrari, quickly proved he was a match for the four-time champion – eventually finishing ahead of him in the final standings.

“He did a fantastic, great season last year,” said Binotto of Leclerc. “I think he has proved that he can do it. So I think it’s right that they are on the same level to start the 2020 season.

“They know as well that the team has the first priority, so team orders may still be there. I’m not saying that they are free to race and that there will be no team orders.

“So there may be team orders to the benefit of the entire team. But it has to be a clear situation.”

Equal status could well lead to more on-track controversies – which Vettel and Leclerc had their fair share of in their first year as team-mates – but Binotto is confident his drivers have learnt from 2019.

“I think that last year has been very useful to both of them and myself to know each other, to understand how we should behave and what should be the rules in the team, what priority the team has first,” he added.

“I think that the two drivers now know each other a lot more better and they are behaving well.”

For the first time ever, BOTH weeks of F1 Testing are being shown live – meaning you also won’t miss a minute of the second week of action at Barcelona.

Coverage of Test Two starts on Wednesday at 7.55am, with the track sessions running from 8am-12pm and then 1pm-5pm. Subscribers can watch on Sky Sports F1 and the Sky Sports app, while the Live Blog on our digital platforms will include the latest updates and free-to-view video clips across all three days.